Fog covers the top of the Gateway Arch during a steady rain in downtown St. Louis on October 21, 2020. File Photo by Bill Greenblatt/UPI | License Photo

AccuWeather meteorologists expect damaging thunderstorms to erupt all the way to the East Coast on Thursday, developing from the same weather system that was expected to bring potentially damaging storms to parts of the Midwest.

In Wisconsin, northern Indiana and northwestern Ohio, storms will have the potential to pack 100-mph winds in some cases on Wednesday night. While storms that fire from the middle part of the Mississippi Valley through the Ohio Valley and mid-Atlantic coast may not be quite that robust, there will be the risk of severe weather in a zone that spans at least a dozen states on Thursday. 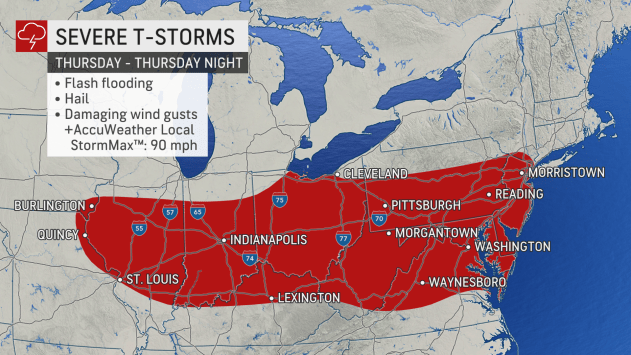 The storms will carry the risk of damaging wind gusts, hail and flash flooding. There is even the potential for a couple of isolated tornadoes to touch down. A few of the strongest storms have the potential to bring wind gusts between 60 mph and 90 mph.

Wednesday night's complex of severe weather will likely be ongoing to start off the day Thursday with the threat of damaging winds blowing into parts of Indiana and Ohio.

"There is a chance for this storm complex to just keep rolling along all the way from Wisconsin Wednesday evening through Virginia on Thursday as well," AccuWeather chief on-air meteorologist Bernie Rayno said. If the storms cause damage for at least 240 miles, that would meet the official definition of derecho by the National Weather Service.

Damaging winds will become a concern across West Virginia, parts of Virginia and southern Pennsylvania on Thursday, according to AccuWeather meteorologist Matt Benz. Storms will spill over the mountains and make a run toward the coast late Thursday afternoon and evening, he explained.

Thunderstorms may erupt across a wider corridor of the Northeast near a frontal boundary in the mid-Atlantic region from the Chesapeake Bay to possibly New York City and perhaps southeastern New England during Thursday afternoon and evening.

As the cool front pushes southward into Thursday from the Great Lakes toward the middle Mississippi and Ohio River valleys, thunderstorms will erupt across these regions late in the day as well. 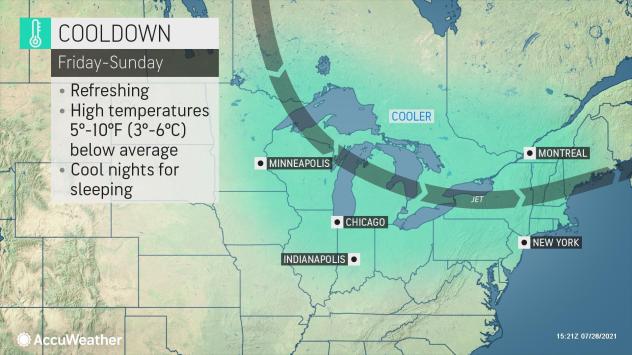 Dry and more comfortable air is likely to take hold over the Great Lakes region by Friday. However, it may not be until later Friday night until another round of showers and thunderstorms clears the central and northern Appalachians and pushes off the New England and mid-Atlantic coast.

The moon appears orange due to smoke from wildfires on the West Coast as it sets behind the Manhattan skyline in New York City on July 21, 2021. The fires are leaving smoke all the way across the country to the Eastern Seaboard causing hazy skies. Photo by John Angelillo/UPI | License Photo

Severe storms to slice through unseasonable warmth in Upper Midwest