Crowds gather ahead of Trump campaign rally in Tulsa, Oklahoma

Amid an ongoing pandemic and after weeks of protests about racial inequality, President Donald Trump will hold a rally with thousands of supporters in Oklahoma on Saturday in an effort to reinvigorate his re-election campaign.

Trump has come under fire for his responses to the coronavirus pandemic and to the death of George Floyd, a Black man who died after a police officer in Minneapolis knelt on his neck for nearly nine minutes.

He drew more criticism for his decision to hold his first rally since schools and businesses were shut in March to stop the spread of coronavirus in Tulsa, the site of the country's bloodiest outbreaks of racist violence against Black Americans some 100 years ago.

Oklahoma has reported a surge in new COVID-19 infections in recent days, and the state's department of health has warned that attendees at the 19,000-seat BOK Center venue face an increased risk of catching the virus.

Hours before the rally, Trump's campaign announced six members of its advance team had tested positive for COVID-19.

"Six members of the advance team tested positive out of hundreds of tests performed, and quarantine procedures were immediately implemented," Tim Murtaugh, campaign communications director, said in a statement. "No COVID-positive staffers or anyone in immediate contact will be at today's rally or near attendees and elected officials."

Supporters are delighted to see Trump back on the campaign trail, and those wanting to attend far outstripped the number of seats available, Trump campaign officials said. 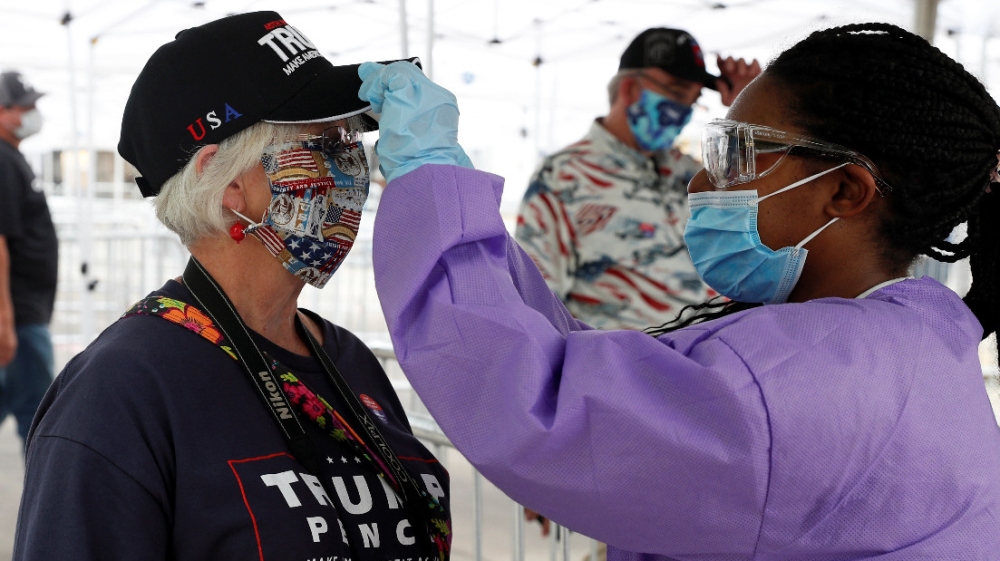 A supporter wearing a face mask has her temperature checked outside the venue for President Donald Trump's rally in Tulsa, Oklahoma [Shannon Stapleton/Reuters]

The rally is expected to be the biggest indoor event the country has seen since restrictions to prevent the coronavirus from spreading began in March.

Tens of thousands of people are expected to gather in Tulsa for the event, which has prompted concerns about the spread of the coronavirus. The risk of transmitting the virus is greater indoors and mask-wearing is not obligatory at the event.

Trump's own campaign issued an unusual disclaimer telling attendees they "assume all risks related to exposure to COVID-19".

The rally comes as the country is still in the throes of the coronavirus pandemic, with Oklahoma's case tally reaching a new daily high on Wednesday, at 450 infections.

More than 20 US states are seeing an increasing number of coronavirus cases. Anthony Fauci, the top US expert on infectious diseases, said the country is still in the midst of its first wave of infections and a second wave this fall is still possible. 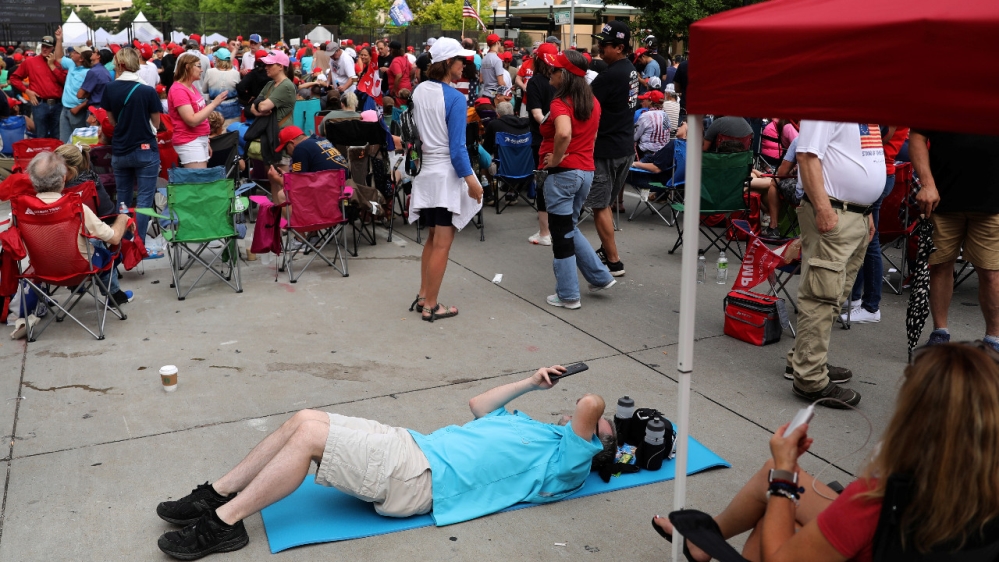 A man lies on the ground outside the venue of Donald Trump's rally in Tulsa, Oklahoma [Goran Tomasevic/Reuters]

Trump has emphasised quickly reopening the country, claiming that there may be "embers" of the pandemic that can be handled locally.

In an interview with the news site Axios on Friday, Trump predicted a "wild evening" in Oklahoma.

He said the rally is about pushing a message of reopening the country.

The president has also previously warned protesters that they will face a harsh response in Tulsa.

The Trump campaign said masks and hand sanitiser will be provided at the rally. However, many attendees are expected to flout local and national guidelines that recommend people wear face coverings in public.

"It's a personal choice, I won't be wearing a mask," White House Press Secretary Kayleigh McEnany said on Friday, adding that she is frequently tested for the virus.

Reporting from Tulsa, Al Jazeera's Jay Gray said supporters had begun queueing to enter the venue hours before Trump was due to speak.

"Lines are already gathering. We have seen a handful of people camping out on the streets for a full week ahead of this rally. A lot of people are very excited to see the president," he said. "When you talk to those supporters, most will tell you that they don't plan to wear facemasks, that they are not concerned about the virus."

"Officials in this city are extremely concerned about people coming in from different areas of the country, areas that may have a high number of cases of the virus right now, and are worried about the potential lasting effect of this event at a time when they can't afford to see more of this virus introduced to the community".

Trump also faces criticism for holding the rally in Tulsa - where hundreds of Black residents were massacred by white mobs in 1921 - following the killing of George Floyd last month.