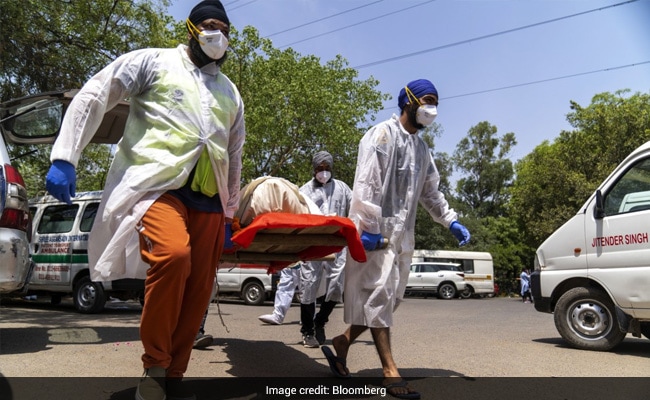 People carry the body of a deceased Covid-19 patient into a crematorium in New Delhi.

The coronavirus wave that plunged India into the world's biggest health crisis has the potential to worsen in the coming weeks, with some research models projecting that the death toll could more than double from current levels.

A team at the Indian Institute of Science in Bangalore used a mathematical model to predict about 404,000 deaths will occur by June 11 if current trends continue. A model from the Institute for Health Metrics and Evaluation at the University of Washington forecast 1,018,879 deaths by the end of July.

While coronavirus cases can be hard to predict, particularly in a sprawling nation like India, the forecasts reflect the urgent need for India to step up public health measures like testing and social distancing. Even if the worst estimates are avoided, India could suffer the world's biggest Covid-19 death toll. The U.S currently has the largest number of fatalities at around 578,000.

India reported a record 3,780 deaths on Wednesday for an overall toll of 226,188, along with 382,315 new cases, taking its outbreak past 20.6 million infections. In recent weeks, the scenes on the ground, with long lines outside crematoriums and hospitals turning away ambulances, have painted a picture of a nation overwhelmed by the crisis.

"The next four to six weeks are going to be very, very difficult for India," said Ashish Jha, the dean of Brown University School of Public Health. "The challenge is going to be to do things now that will make sure it is four weeks, not six or eight, and that we minimize how bad things will get. But in no way is India anywhere near out of the woods."

A spokesperson for the health ministry couldn't immediately be reached. The ministry said on Monday that in about a dozen states, including Delhi, Chhattisgarh and Maharashtra, there are early signs that the number of daily new infections are starting to plateau.

The Indian rupee has declined about 1% this quarter in Asia's worst performance as investors turned cautious ahead of an unscheduled speech by India's central bank governor Wednesday. The benchmark S&P BSE Sensex Index is down about 2% as foreign funds sold about $1.7 billion of the nation's stocks.

A prolonged crisis has the potential to dent the popularity of Prime Minister Narendra Modi as well as slow or reverse India's recovery from last year's economic recession. Bloomberg Economics lowered its growth projection for the year ending March 2022 to 10.7% from 12.6%, and even these numbers are flattered by a low base as activity ground to a halt due to a strict lockdown last year.

For public health researchers, a key concern is the relative dearth of coronavirus testing, which many scientists believe is causing a sharp undercounting of cases. 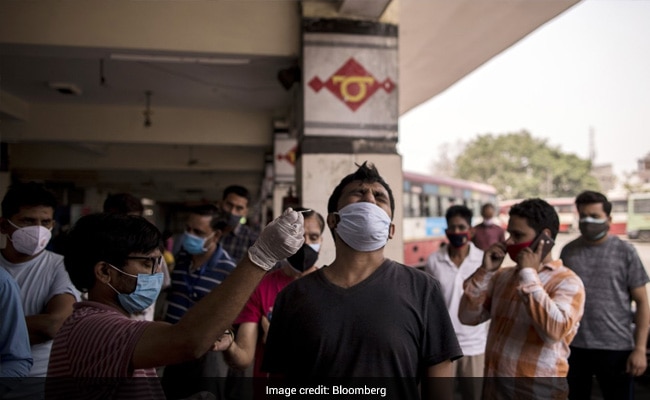 A health worker takes a swab at a Covid-19 testing site in Uttar Pradesh, on May 4.

"It could honestly get a lot worse, which is hard to imagine given how staggering the impacts have already been when you see 400,000 new cases each day and you know that that's probably an underestimation," said Jennifer Nuzzo, a senior scholar at the Johns Hopkins Center for Health Security in Baltimore, Maryland.

The main metric that officials are watching is the test positivity rate, which is the percentage of people with positive test results. The overall positivity rate is 20% in India now, and in some parts of the country it tops 40%, a shockingly high number that indicates as many as three-fourths of infections are being missed, said Mr Jha.

The World Health Organization considers anything above 5% too high, saying that governments should implement social distancing measures until positivity rates are below that level for at least two weeks.

"Despite scaling up testing considerably, it's still not enough to capture all the infected people," said Soumya Swaminathan, chief scientist at the World Health Organization, speaking on Bloomberg TV. "So the numbers, while very high, are likely an underestimate of the true numbers of infections," she said. "It's a grim situation."

The goal is to run enough tests that a large number of infected people aren't going undiagnosed. If only the sickest patients are tested, many people with milder disease or no symptoms at all may continue to unwittingly spread the disease.

"There are reports of tests being considerably delayed and of patients delaying having to go to hospital as much as they can, given the stresses on the health system," said Gautam Menon, a professor of physics and biology at Ashoka University, who also works on modeling outbreaks. "We don't know enough about COVID-19 spread away from the major cities, in the rural heartland of India, although reports from there suggest that the situation is dire."

The U.S. government, as part of a package of supplies for India, pledged last week to send one million rapid tests to India. There are several other things that could be done quickly to try to help staunch the outbreak. High on the list is wearing masks, a crucial element for disease control, said Catherine Blish, an infectious disease specialist and global health expert at Stanford Medicine in California.

Major cities in India already require people to wear masks, but such rules can be harder to implement in crowded slums and rural areas. Several states have introduced lockdowns, although PM Modi has resisted a national effort after one imposed by him last year fueled a humanitarian crisis with migrant workers fleeing the cities on foot and in some cases bringing the virus with them.

The Indian Institute of Science has estimated that with a 15-day lockdown deaths could be lower at 300,000, falling to 285,000 with a 30-day lockdown. IMHE estimates a lower death toll of around 940,000 by the end of July with universal mask wearing.

Vaccines will be the big way to remove risks, although it will take time to get there, public health experts say.

It takes several weeks for immunity to build after someone has been vaccinated. The process is even longer with those that require two shots, stretching the process out to six weeks to two months.

"The vaccines are working," said Kim Mulholland, an Australian pediatrician and leader of the infection and immunity group at the Murdoch Children's Research Institute in Melbourne. "They just haven't got the capacity."

Ultimately, cases will come down, it's just a matter of when, said Michael Osterholm, director of the Center for Infectious Disease Research and Policy at the University of Minnesota, and an adviser to U.S. President Joe Biden. Scientists still don't have a good understanding of why Covid-19 comes in sudden, roller-coaster-like changes, he said.

"It will eventually burn itself through the population," Osterholm said. "Within several weeks to a month and a half, you will see this peak come back down, and it's likely to come down quickly."

--With assistance from Jason Gale.