The prevalence of Sars-Cov-2 virus antibodies in Delhi dropped by over four percentage points in a month, officials told the Delhi high court citing the recent serological survey, throwing up an epidemiological finding that now distorts estimates of how many people may have been exposed to Covid-19 in the national capital.

The presence of antibodies, which develop after a person has had an infection, is only expected to grow within a population with an outbreak. 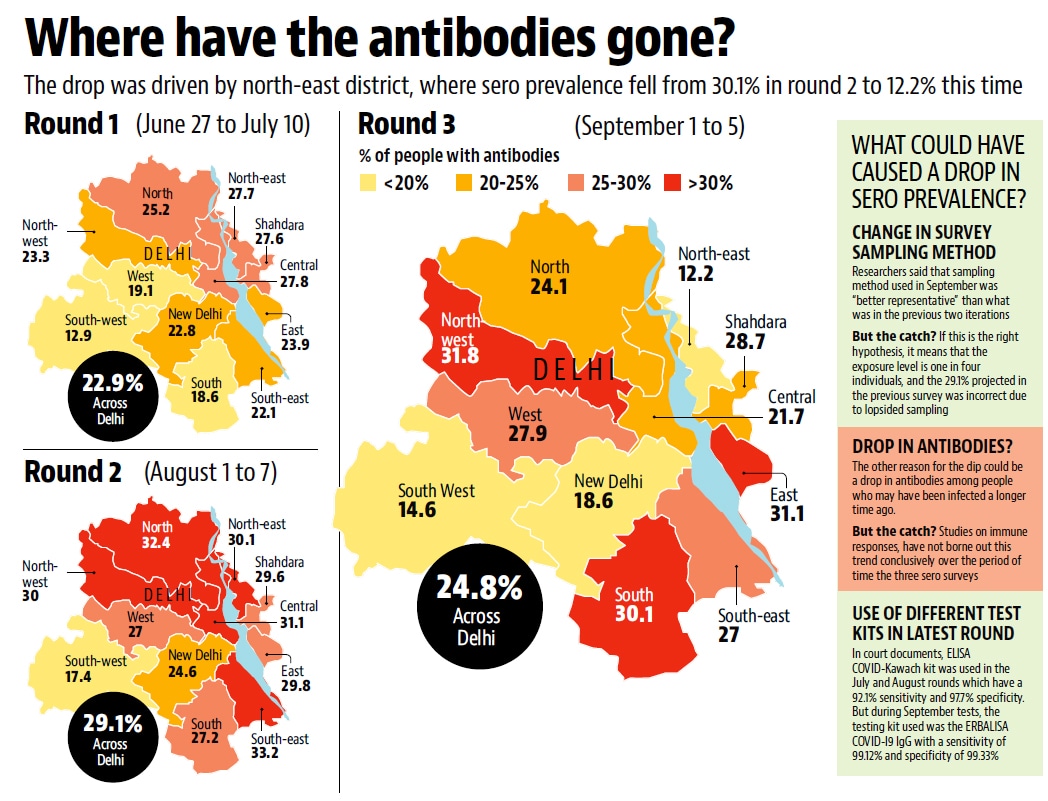 The decrease may be due to a change in sampling method to represent of socio-economic conditions of the people, the researchers who designed the survey said.

“The sampling method that we have used this time is more representative; samples were collected based on where people lived -- planned colonies, unauthorised colonies etc,” said Pragya Sharma, professor of community medicine at Maulana Azad Medical College (MAMC), who was part of the team that designed the survey, led by MAMC dean Nandini Sharma.

If this is the right hypothesis, it means that the exposure level is one and four individuals, and the 29.1% projected in the previous survey was incorrect due to lopsided sampling.

Experts said the change in sampling criteria meant comparing the last two surveys was similar to comparing “apples and oranges”.

“Ideally, seroprevalence should not go down, especially when lockdown is happening and more and more cases are being reported. The pattern will become clear after a couple of more rounds of sero survey,” said Dr Amit Singh, associate professor, centre for infectious diseases at Indian Institute of Science, Bangalore.

It found prevalence of antibodies was lower among those in planned colonies – 22.9% as compared to 25.9% in other areas. This could be because it may be easier for people living in planned colonies to maintain social distance and hygiene, the survey states.

Some researchers added that the other reason for the dip could be a drop in antibodies among people who may have been infected a longer time ago.

“The August seroprevalence was based on the infections that had happened a month ago; Delhi had seen a surge in cases in June end and July. This could be the reason for high antibody prevalence in August and then dissipating antibodies resulted in lower prevalence in September,” said Dr Sharma.

However, studies on immune responses, have not borne out this trend conclusively over the period of time the three sero surveys were carried out in. “There are some data – not very robust – that shows the antibodies go down after three or four months, but it wouldn’t explain a 4% dip,” Singh said.

Dr Shobha Broor, former head of the department of microbiology at the All India Institute of Medical Sciences (AIIMS), too said “there should not be a dip in the seroprevalence”.

“We need to look at the minutae of how the samples were collected and how the data was analysed,” she added.

A Delhi government spokesperson said the second survey sampling was done at the district level while for the third samples were selected from 280 divisions - 272 MCD wards and four divisions each of NDMC and Delhi Cantonment Board. “Hence, the third sero survey was much more representative of the antibodies prevalence at population level,” he said.

Officials in Delhi’s health departments earlier said, while asking not to be named, that the September sampling showed that the prevalence of antibodies have increased to close to 33%.

The Delhi high court pulled up the government for disclosing these findings.

“Why is the Delhi government so eager to give the survey report to the media and not to the court? Don’t show the press as unreliable. Don’t play games with the court like this…Have you issued a clarification,” a bench of Justice Hima Kohli and Justice Subramonium Prasad said.

The Delhi surveys have consistently shown that more women than men have had exposure to Covid-19, which is opposite of what the national-level survey has found. In the current round of surveys, 30.4% of the women participants had antibodies as compared to 27.3% men. The highest seroprevalence was among women from Northwest Delhi at 33.1%.

The study authors recommended that the rounds of sero surveillance needs to be held at longer intervals – currently it is conducted during the first week of each month – as per resource constraints.

“Any future rounds of the sero survey should have an enhanced focus on ensuring representativeness of the sample in terms of settlement type and socioeconomic status,” the study said.

The court’s admonition came while hearing a plea filed by advocate Rakesh Malhotra who had sought ramping up of tests in the city.

On the last date, the court had asked the Delhi government to submit the results of the 3rd sero survey in the court and not give it out to the media.

During the hearing, the Delhi government also submitted a status report stating that the Geospatial Delhi Limited (GSDL) was requested to map out fixed testing sites to ensure easy access to the residents of Delhi.

The government told the court that the final map has been shared with Delhi Metro Rail Corporation (DMRC) with request to put it on display at prominent locations/sites at major metro stations (at entry/exit points and others as found appropriate) for the information of general public.

On the issue of providing testing access through Mohalla Clinics and Community centres, the government told the court that the need for more testing sites is a constituent of the overall testing paradigm under consideration of the Expert Committee and a decision shall be taken in accordance with what the panel decides.

'I pulled a rickshaw': Emotional Punjab CM Channi speaks of his humble origins, says his government is of 'aam aadmi'