COVID-19 antibodies in blood plasma donations appear to drop within just months of symptoms emerging, a study has warned.

The NHS has been using plasma as a treatment for coronavirus infections, and the number of people receiving donations has quadrupled in the last month.

But the health service says it still needs more donations and is partnering with Facebook to enlist new donors in England, Wales and Northern Ireland ahead of a potential second wave of COVID-19. 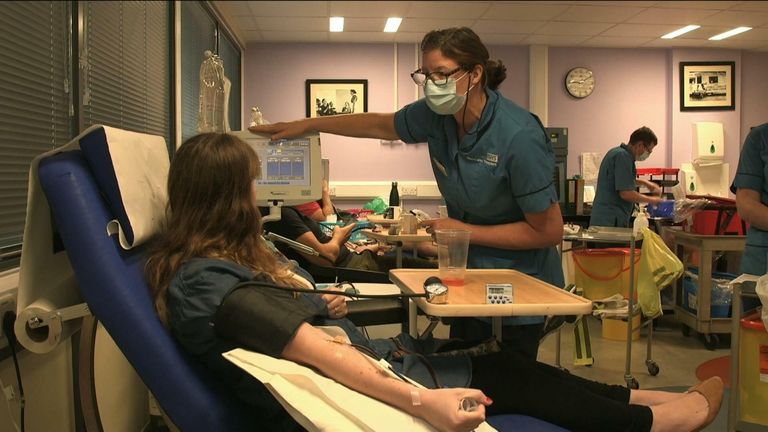 Having plenty of donors could prove even more vital after the warning from a study in Canada that antibody levels in blood plasma donations do not appear to be long-lasting.

With most viruses, antibodies produced by the immune system to fight off the infection can remain in the plasma for months or potentially even years, according to the American Society of Haematology.

In the case of COVID-19, convalescent plasma treatment infuses people who are suffering with blood plasma from someone who has already recovered in the hope it will help the new patient fight off the disease.

Dr Renee Bazin, author of the study published in the journal Blood, said: "While many clinical trials are underway to better understand whether convalescent plasma is clinically beneficial for treating COVID-19, a key question is at what time point is it most effective to collect donor plasma based on the presence of antibodies that help fight the virus.

"Based on our findings, antibodies against the new coronavirus are not eternal."

The small study was carried out in Quebec, Canada, where Dr Bazin works at the Hema-Quebec blood centre.

It drew from 282 plasma donors who had recovered from COVID-19, and followed 15 adults who were diagnosed with the disease and subsequently recovered from it.

These adults donated their plasma between four and nine times after the infection, with the first donation occurring between 33 and 77 days after the onset of symptoms, and the last donation between 66 and 114 days.

Every participant showed a decrease in antibodies at the same time, around 88 days from the first symptoms.

The researchers said the decline appeared to be unrelated to the number of times somebody donated blood, but instead correlates with the time elapsed since the body overcame the virus.

"The antibodies disappear rapidly, so people recovering from COVID-19 who want to donate blood plasma should not wait too long once they become eligible to donate," said Dr Bazin.

She added that the findings suggest clinicians "should ideally use plasma that is collected early on after a donor's onset of symptoms and check for the presence of antibodies before giving donor plasma to a patient".

Plasma donations from COVID-19 survivors are being collected at NHS Blood and Transplant's 23 donor centres all around the UK, and at five pop-up centres.

London, Greater Manchester and Birmingham are priority areas for donations.

Samsung Galaxy S22 will not come with an Olympus branded camera: Report