With both sides in the US presidential election duelling in court over rules and procedures ahead of the November 3 vote, Democrats scored a victory on Monday when the Supreme Court left in place a ruling that extended a deadline for counting mail-in ballots in the battleground state of Pennsylvania.

But Trump’s re-election campaign and the Republican National Committee have also notched up important wins, including a recent ruling in Texas limiting voters’ ability to correct rejected
mail-in ballots.

The coronavirus pandemic has prompted hundreds of lawsuits in the US over how people can cast their ballots. Americans, fearing the novel coronavirus, are expected to vote by mail in record numbers.

Trump’s Republican allies who control the US Senate are rushing to confirm conservative jurist Amy Coney Barrett to the Supreme Court before the election. Seating Barrett on the court would create a conservative majority that is likely to rule against Democrats in voting cases.

Below are some of the biggest victories so far for Trump and his Democratic challenger Joe Biden.

The Pennsylvania Supreme Court ruled on September 17 that officials in the closely contested state can accept mail-in ballots three days after the November 3 election so long as they were postmarked by 8pm ET on Election Day.

The Supreme Court, in a 4-4 decision, said it would leave that decision in place, turning away an appeal by the state Republican Party and Republican officials.

Republicans did prevail on one key issue at Pennsylvania’s highest court. Interpreting a state law, the court said officials must throw out so-called “naked ballots” – ballots that arrive without
inner “secrecy envelopes”.

Republicans argued the secrecy sleeves help deter fraud. Democrats have warned the ruling could lead to an estimated 100,000 votes being thrown out.

Drop boxes have become a partisan flashpoint, with Democrats promoting them as a safe option for voters unnerved by the COVID-19 pandemic and US Postal Service delivery problems.

Republican officials and Trump’s campaign have argued without evidence that the boxes could enable voting fraud. On October 10, US District Judge Nicholas Ranjan in
Pittsburgh, a Trump appointee, rejected a bid by the Trump campaign and Republican Party to limit the use of drop boxes in Pennsylvania.

Ranjan wrote that the plaintiffs failed to prove a risk of voter fraud. “At most, they have pieced together a sequence of uncertain assumptions.” 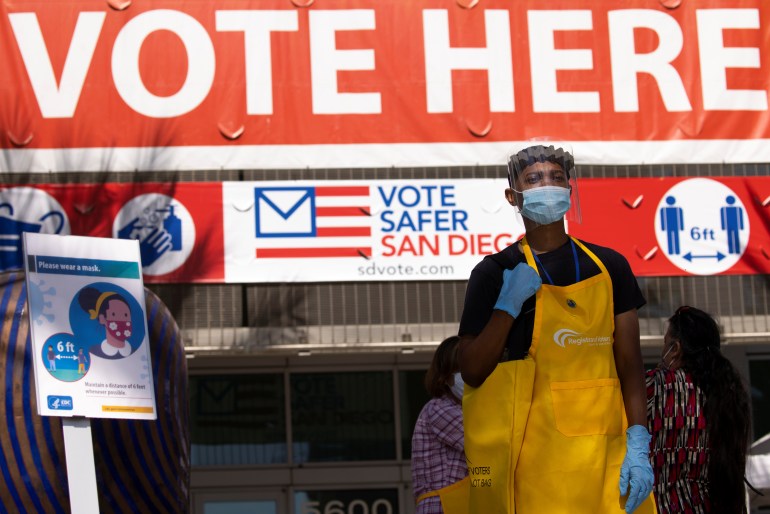 An election worker collects mail-in ballots and guides voters at the entrance to the Registrar of Voters building in San Diego, California, on October 19, 2020 [Mike Blake/Reuters] Texas ballot drop-off sites

Democrats scored a win in Texas on October 15 when a judge lifted an order by Republican Governor Greg Abbott limiting counties to a single location for mail ballot drop-off sites.
That order is on hold while it is being appealed.

A federal appeals court on Monday said Texas does not have to give voters a chance to correct mail-in ballots that are rejected because the signature does not match the one on file
with the state.

The Fifth US Circuit Court of Appeals halted a lower court order that gave voters an opportunity to correct, or “cure,” the defect.

The ruling came in a lawsuit brought by a voting rights group against Republican Party officials in Texas, a longtime Republican stronghold that may be up for grabs this year.

On October 8 the Texas Supreme Court ruled that officials in the state’s most populous county, a Democratic stronghold that includes Houston, cannot send out unsolicited applications for mail-in ballots to its 2.4 million registered voters.

Unlike other states, Texas limits mail-in voting to those who are 65 and older, cite a disability or illness, are in jail but otherwise eligible or are outside the county where they are
registered.

The decision was a win for Republican party officials, who said sending mail-in ballot applications to everyone in Harris County, the third most populous county in the United States, would cause confusion and lead to voter fraud. 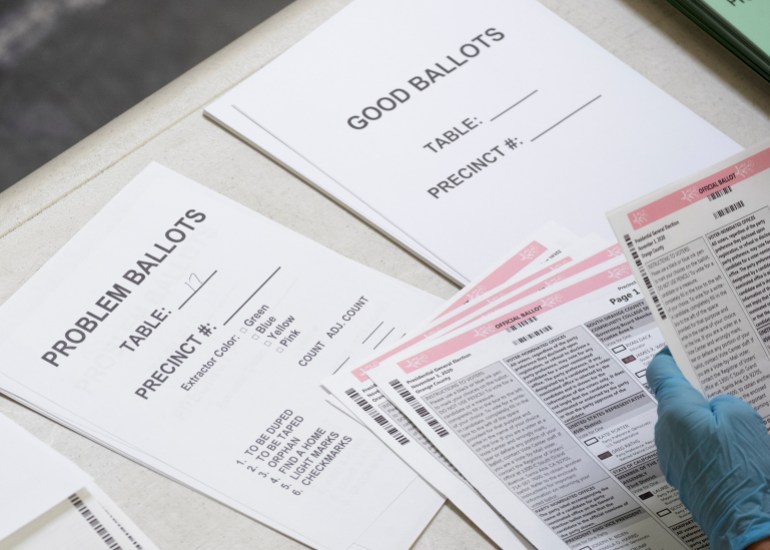 An election worker looks over some of the hundreds of thousands of early mail-in ballots as they are processed at the Orange County Registrar of Voters in California on October 16, 2020 [Mike Blake/Reuters] Florida restricts ex-felon’s right to vote

A federal appeals court ruled in September that Florida can require felons to pay fines, restitution and legal fees they owe before they regain their right to vote.

By a 6-4 vote, the Eleventh Circuit Court of Appeals reversed a lower court ruling that the measure amounted to an unconstitutional poll tax. Five of the six judges in the majority were appointed by Trump.

Ex-felons in Florida are more likely to register as Democrats, according to an analysis published this month by the Tampa Bay Times, Miami Herald and ProPublica.

Nearly 900,000 Floridians with felony convictions will be unable to vote in the election because of the decision, according to an October 14 study by the Sentencing Project, a
criminal justice reform group.

Fight over absentee ballots in Wisconsin

Democrats had argued that ballots postmarked by election day that arrive up to six days later should be tallied, saying such a policy would protect the right to vote amid a surge in mail-in
ballots because of the coronavirus pandemic.

The Seventh Circuit Court of Appeals held that it was too close to election day to make significant modifications to the voting process.

In a scathing dissent, one judge denounced the decision as a “travesty” and said thousands of people would lose their right to vote.

An appeal to the Supreme Court is pending. 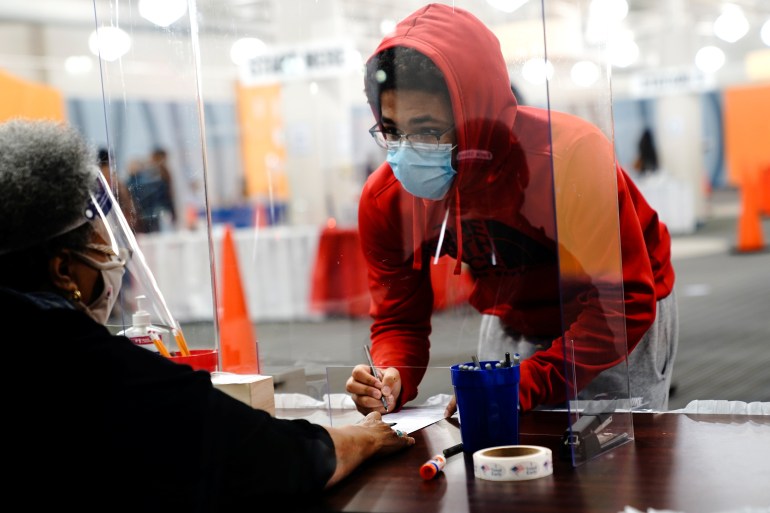 A young voter fills out a ballot with assistance from a poll worker at a polling station in Milwaukee on the first day of in-person voting in Wisconsin on October 20, 2020 [Bing Guan/Reuters] Michigan counting deadline

A Michigan appeals court ruled on October 16 that ballots received after 8pm ET on November 3 cannot be counted, reversing a ruling by a state court judge in Detroit and changing the battleground state’s voting rules just two weeks before the election.

The judge in Detroit had said Michigan voters should have their ballots counted for up to 14 days following November 3 so long as they were postmarked by November 2.