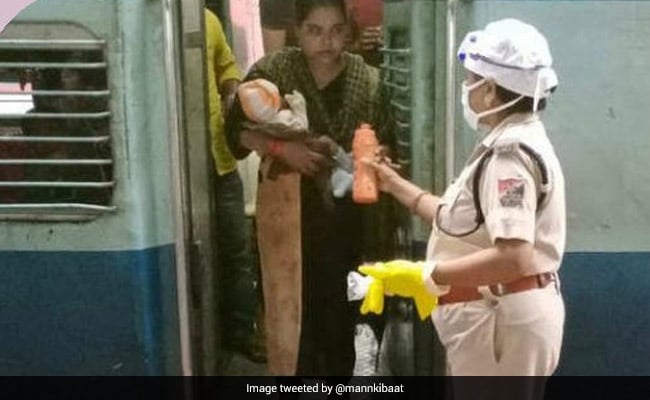 Assistant Sub-Inspector Sushila Badaik hands over a bottle of milk to the passenger.

A police official in Jharkhand has earned praise from top officials after she was seen rushing to her house and fetching milk for a hungry child travelling on the Shramik Special train with its parents.

As the Bengaluru-Gorakhpur train reached Hatia railway station in Ranchi, Jharkhand, a passenger approached the police official on duty -- Assistant Sub-Inspector of the Railway Protection Force Sushila Badaik -- and informed her that her four-month-old baby was hungry.

Ms Badaik immediately went to her house on her two-wheeler, fetched a bottle of warm milk and handed it over to the woman, identified as Mehrunisha, who was returning home to Madhubani in Bihar.

"The baby was crying, and I rushed to fetch milk," a railway official quoted Ms Badaik as saying.

The Ministry of Railways also shared the story on its twitter handle.