The 33-year-old comedian, who has more than 20 million subscribers and has been making YouTube videos for more than 10 years, made the announcement in an emotional 11-minute clip.

She said she had made "almost all" of her old content private over the last few days because "I don't want someone to watch something and feel hurt or offended now for any reason, at all".

"I think I'm just going to move on from this channel, for now," she said.

"I don't know if that's forever. I don't know how long that's going to be... I want to make sure that the things that I've put into the world aren't hurting anyone.

"I'm ashamed of things I've said and done in my past."

Marbles, real name Jenna Mourey, referred to several videos, including one made in 2011 in which she appears to wear blackface to do a "cringey and embarrassing" impression of Nicki Minaj.

She explained: "It was not my intention to do blackface... but all that matters is that people were offended and it hurt them.

"This isn't okay, and it hasn't existed on the internet, because it isn't okay.

"I haven't done anything remotely like that, because I heard people say 'this is blackface' and 'I don't like that'."

She referred to another video, made in that same year, that included the words: "Hey, Ching Chong Wing Wong/... Sorry, that was racist/ I'm bad at rap songs."

Marbles apologised repeatedly for offending anyone with the videos, adding: "I shouldn't have said that. Ever. It's not cool. It's not cute. It's not okay." 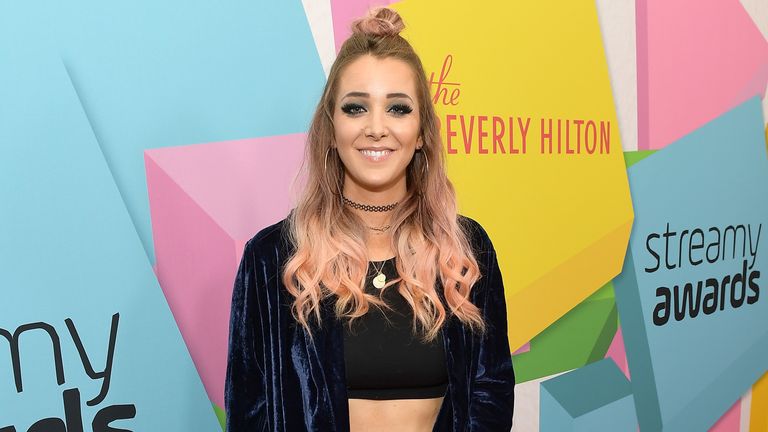 Image: The YouTuber has been making videos for more than 10 years

The comedian, who was brought up in New York but now lives in Los Angeles, addressed a third video made in 2012, but which she did not show, and apologised for slut-shaming.

She said: "There's no on-demanding an apology of me for that video right now, but put it on my tab."

Marbles broke down in tears during the announcement, and said it would be her last video on the channel, "for some time, possibly forever".

"I want to make sure the things I put out into the world are not hurting anyone," she said.

Marbles rose to fame for her 2010 video titled How To Trick People Into Thinking You're Good Looking, which has had more than 69 million views to date.

She is also the first social media star to have a wax figure displayed at Madame Tussauds in New York City.