Colombia has arrested 10 people accused of involvement in attacks on a helicopter carrying President Ivan Duque and a military base last month that officials said on Thursday were planned by former FARC rebel leaders based in Venezuela.

The car bombing at the base in the northeastern city of Cucuta, home to the army’s 30th Brigade, wounded 44 people, including two US military advisers. Later in June, a helicopter approaching the city with Duque and other officials on board was strafed by bullets.

Orders to carry out the attacks came from former FARC leaders who are operating from Venezuela, Defence Minister Diego Molano said during the news conference. 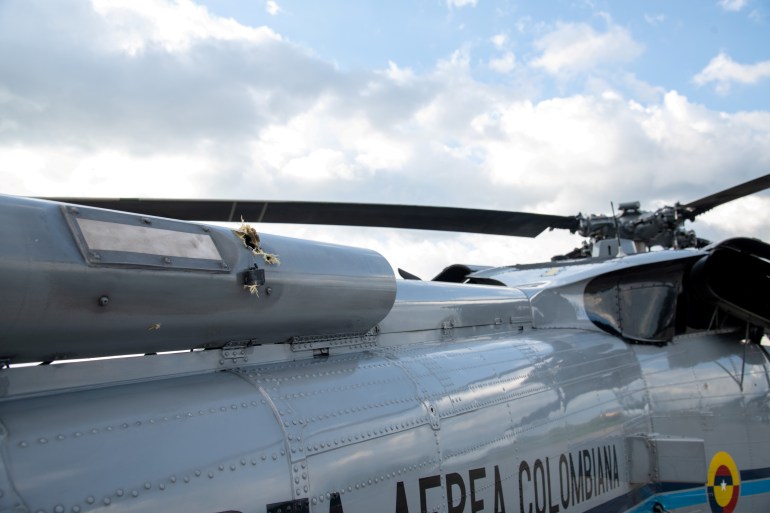 The mark of a projectile impact on a helicopter that Colombian President Ivan Duque was travelling in, after it suffered an attack during an overflight, according to authorities, in Cucuta, Colombia [File: Colombia Presidency/Handout via Reuters]

“It’s clear that this attack against the president, against the 30th Brigade, was planned from Venezuela,” Molano said.

Molano said the attacks demonstrated that the government of Venezuelan President Nicolas Maduro sheltered FARC dissidents, referring to them as “terrorists.”

“I would like to show that it is clear that this attempt against the president and the 33rd brigade was planned from Venezuela and it is, therefore, necessary for the international community to reflect on how the Maduro regime continues to protect terrorists that continue to attack Colombian institutions,” he said.

Three of them took part in the planning and execution of both attacks and have been detained and charged, while another is a retired army captain, Barbosa said.

Colombia’s government has long accused Maduro of turning a blind eye to the presence of Colombian rebels on his country’s territory. Maduro, in turn, has said Venezuela is a victim of criminals from Colombia.

“Once again they use Venezuela to try to hide the tragedy of their country,” he said, adding that Colombia was riddled with violence and armed groups, with an economy reliant on drug trafficking.

The latest development comes in the middle of another political crisis engulfing the country.

Protests across Colombia started on April 28 against proposed tax increases on public services, fuel, wages and pensions, but it has morphed into a general demand for the government to pay longstanding debts to the most vulnerable in society, such as Indigenous and Afro Latino people. Even though the administration of Duque withdrew the tax measure, protests continued and grew as reports emerged of police violence, arrests, deaths and disappearances. 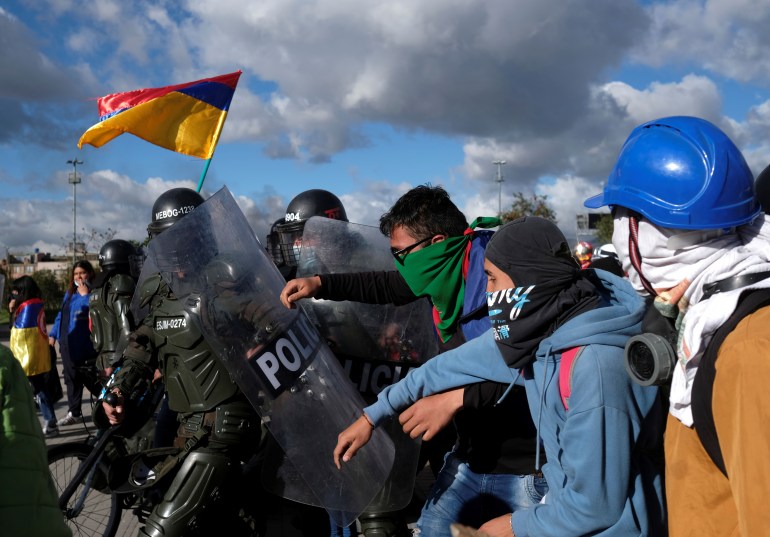 On Tuesday the government formally presented a $3.95bn tax reform bill to Congress, as unions and student groups sought to revive the street protests.

The finance ministry emphasised the bill will not affect most taxpayers, after a proposed increase in sales tax in the April version drew special ire.

But protesters have voiced scepticism about government promises to reform key demands such as police reform and improving opportunities for young people, including a 25 percent minimum wage subsidy for companies that hire 18- to 28-year-olds.

Earlier in July, the UN special envoy for Colombia called on Colombian society to use the 2016 peace agreement between the government and the country’s largest rebel group as an opportunity to address many longstanding issues that provoked the protests and unrest.

Carlos Ruiz Massieu told the UN Security Council that it is urgent that these issues be resolved, saying “bold steps” are needed to accelerate the implementation of the peace deal in the coming months.

Before the peace deal was signed with the FARC, more than 50 years of war in Colombia caused more than 220,000 deaths and displaced nearly six million people. An amnesty law was adopted covering most offences committed by FARC fighters.