The new unit consisting of 7,000 personnel will be deployed to border with Venezuela and to drug trafficking hotspots.

Colombia on Friday launched a new military unit to target coca crops and cocaine production, illicit mining, and the illegal armed groups who use such activities for financial gain.

Colombia’s decision to launch the unit, known as CONAT in its Spanish initials, came while the country was preparing to restart aerial spraying of coca crops with the herbicide glyphosate – possibly starting at the end of March – depending on the government receiving approval from the Constitutional Court.

“The unit was born to hit, repress, and break down the structures of drug trafficking and transnational threats linked to illegal mining, the trafficking of wildlife and people, and – of course – any transnational form of terrorism,” President Ivan Duque said at a military base in Tolemaida.

Colombia, considered the world’s leading producer of cocaine, suspended aerial spraying of glyphosate in 2015 following warnings by the World Health Organization that the chemical was potentially damaging to health and the environment. 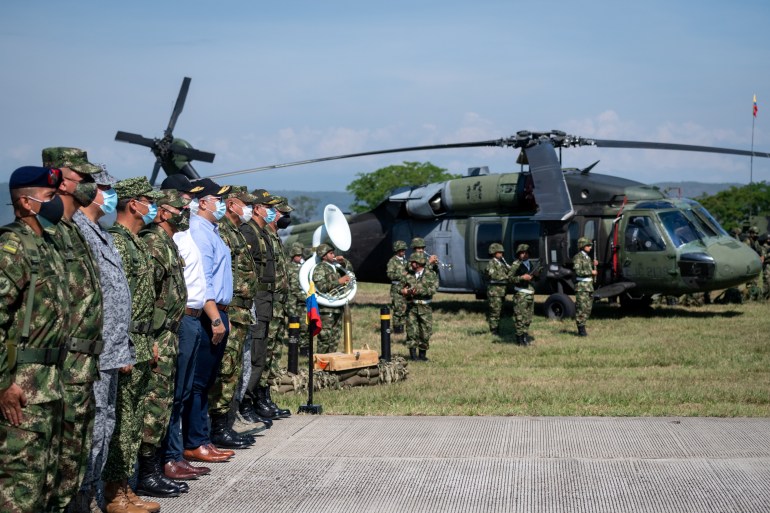 Colombia has faced constant pressure from the United States, a major destination for cocaine, to reduce the size of crops of coca, the drug’s chief ingredient.

During his address, surrounded by helicopters, tanks and hundreds of soldiers, Duque also said the force would pursue “without qualms” members of the ELN – the last active rebel group in Colombia, as well as drug gangs and ex-FARC rebels who have abandoned the terms of a 2016 peace deal, he said.

“Soldiers, it is a morally necessary, morally correct battle … Let’s go for the defence of Colombia!” he said. 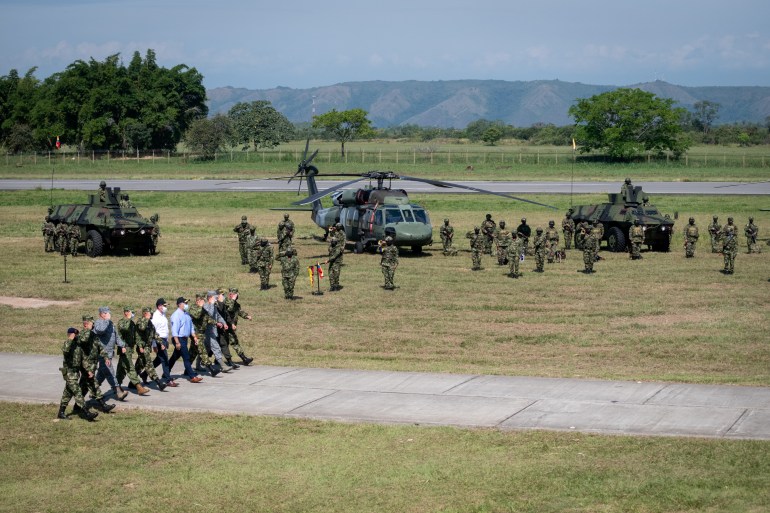 Surrounded by helicopters, tanks and hundreds of soldiers, President Ivan Duque also said the force would pursue ‘without qualms’ members of the ELN and ex-FARC rebels [Courtesy Colombian Presidency/Handout via Reuters]

When he first announced the creation of the elite force earlier this month, he said many of its targets “are protected in Venezuela” though he did not mention direct military action in the neighbouring country. On Friday, Duque did not mention Venezuela.

But his statement prompted Venezuelan President Nicolas Maduro to pledge to “respond forcefully”.

From Caracas, he said the country’s security forces should “clean the barrels of our rifles to answer them at any level we need to answer if Ivan Duque dares violate the sovereignty of Venezuela.”

Colombia and dozens of other countries recognise opposition leader Juan Guaido as interim president, prompting Venezuela to break off diplomatic ties with its neighbour in 2019.