The musicians shared a petition which is now close to collecting a million signatures, set up by the young Manchester United and England star earlier in October, to expand access to free school meals for those in need.

Posting a link on the official band Twitter account, Coldplay thanked Rashford for his "fantastic campaign" and said: "If you're a UK resident, please add your voice." 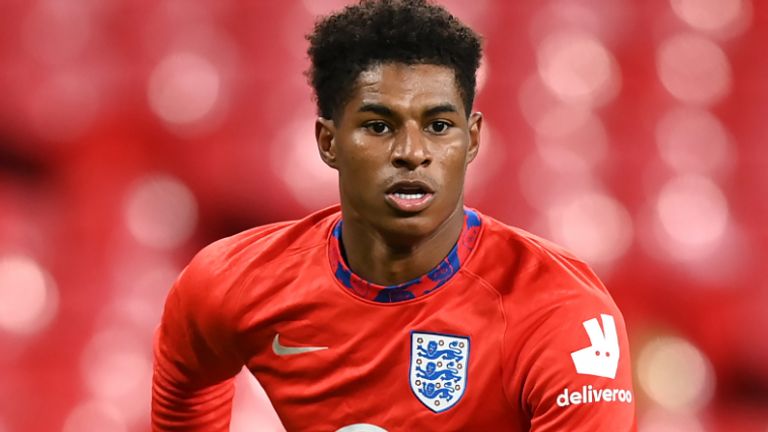 Image: Hundreds of thousands of people have signed Rashford's petition Tomlinson also shared the link, and wrote: "Watching what @MarcusRashford is doing is incredible. Please do take the time to sign if you live in the UK. Our children are our future."

Other stars including The Charlatans frontman Tim Burgess, who like Rashford is also from Manchester, former England player and Match Of The Day presenter Gary Lineker, and author Caitlin Moran have also publicly backed Rashford's campaign.

Burgess described Rashford, 22, as "true hero of our times", while Lineker called him "a remarkable young man".

The government is facing mounting public anger at its refusal to extend free school meals into half-term and beyond as support for the campaign grows.

Businesses, community groups and councils - including Conservative-run administrations - have responded to Rashford's call, providing thousands of free meals for children as schools in large parts of England began their October break.

The footballer, who has 3.7 million followers on Twitter, has used his social media profile to highlight the businesses, individuals and organisations that have pledged their support.

It "swells your heart" to see those that are stepping in to help out, Moran said on Twitter.

Other celebrities including chef Nigella Lawson and comedian and actress Katy Brand have also added their voices to the campaign.

Boris Johnson has insisted that the government will not allow children to go hungry, highlighting cash given to councils and universal credit, which has been increased by £20 a week.

Wow, @MarcusRashford is a true hero of our times. So many MPs should feel shame over the fact that a footballer is helping the needy, more than they are

The timeline of @MarcusRashford shows what this country is truly about. People uniting to help others rather than the tribality and hatred that has torn us apart. We can have different views, political or otherwise, and still be respectful and kind. Be a mate, don’t hate. 👍🏻

Some £63 million was announced by ministers in June to help local authorities feed vulnerable families - although officials expect that money to have largely been spent already.

On Monday evening, Rashford called for businesses to let him know how many meals they had supplied on the first day of half-term - and was quickly inundated with responses, many of which he shared on his timeline.

His club, in partnership with the Manchester United Foundation and the charity FareShare, will provide around 5,000 meals from the Old Trafford kitchens to children from local schools.