China says it does not want to see any more clashes on the border with India following a clash on Monday that killed at least 20 Indian soldiers.

India says the "violent face-off" is an attempt by China to "unilaterally change the status quo" on the Galwan Valley frontier in Indian-administered Ladakh.

Meanwhile, India waits for Prime Minister Narendra Modi's response to the death of Indian soldiers as the country's media vented its fury and political rivals goaded Modi over his silence.

Modi, who rode to power on a nationalist platform, met his defence and foreign ministers and military chiefs late on Tuesday, but he has yet to speak publicly on the worst clash between the two countries since the Nathu La conflict in 1967, five years after the Sino-Indian war.

"Why is the PM silent, why is he hiding," Rahul Gandhi, leader of the opposition Congress party tweeted. "Enough is enough, We need to know what happened. How dare China kill our soldiers, how dare they take our land.

China has said it does not want to see any more clashes on the border with India, adding that both countries are trying to resolve the situation via dialogue.

Chinese foreign ministry spokesman Zhao Lijian reiterated that China is not to blame for the clash and said the overall situation at the border is "stable and controllable".

35 dead and injured on Chinese side during clash in Galwan Valley: official sources quoting US intelligence reports

China's state broadcaster reported on a large military exercise in the same region as a recent deadly border clash with India, The Associate Press reported.

The CCTV report did not mention when exactly the military exercise was conducted, only mentioning "recently" and that 155 vehicles were used in Nyainqentanglha Shan more than 1,200 kilometers (745 miles) from the site of recent deadly clashes between the two nations' armies.

India's Defence Minister Rajnath Singh has said the killings of soldiers in Galwan Valley is "deeply disturbing and painful".

"Our soldiers displayed exemplary courage and valour in the line of duty and sacrificed their lives in the highest traditions of the Indian Army," he tweeted.

"The Nation will never forget their bravery and sacrifice. My heart goes out to the families of the fallen soldiers. The nation stand shoulder to shoulder with them in this difficult hour. We are proud of the bravery and courage of India’s breavehearts." 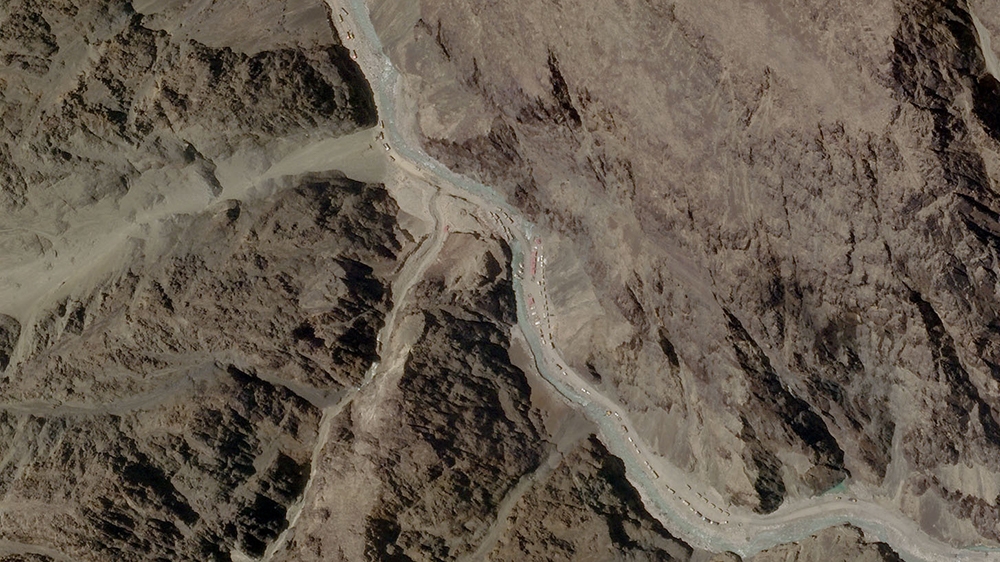 A satellite image taken over Galwan Valley in Ladakh, India, parts of which are contested with China [Reuters]

While Chinese state media has downplayed a deadly military confrontation with India in the Indian-administered Ladakh region, Indian newspapers called for "steely resolve" over the killing of at least 20 soldiers.

Indian news agency ANI on Tuesday night claimed that 43 Chinese soldiers had died in Monday's clash, without giving further details. Chinese media did not reveal casualties on its side.

The incident was very clear, as it happened on the Chinese side of the Line of Actual Control (LAC) and the responsibility did not rest with #China, said Chinese FM on China-#India border conflict https://t.co/M53euCmHEw

Asian regional superpowers India and China share a long history of mistrust and conflict along their lengthy border, and tensions flared this week in their first deadly clash in more than four decades.

The world's two most populous nations and nuclear-armed neighbours have never agreed on the length of their "Line of Actual Control" frontier, which straddles the strategically important Himalayan region.