China’s military says it hopes India will make good on its pledge to swiftly return a Chinese soldier found lost along their mountainous de facto border where the sides have been locked in a tense standoff.

The Chinese defence ministry issued a statement late on Monday, saying the soldier had been helping herders round up yaks when he lost his way on Sunday evening.

The Chinese side informed their Indian counterparts of the missing trooper and were informed shortly afterwards that he had been found and would be returned after undergoing a medical checkup, a spokesperson for the Western Theatre Command, Zhang Shuili, was quoted as saying.

A statement from the Indian side on Monday said the soldier, Corporal Wang Ya Long, was apprehended inside Indian-administered Ladakh’s Demchok area and would be released soon.

It said the soldier “had strayed” across the de facto border along the eastern section of what is known as the Line of Actual Control, a loose demarcation separating Indian and Chinese-controlled areas.

“As per established protocols, he will be returned back to Chinese officials at the Chushul-Moldo meeting point after completion of formalities,” the statement said. 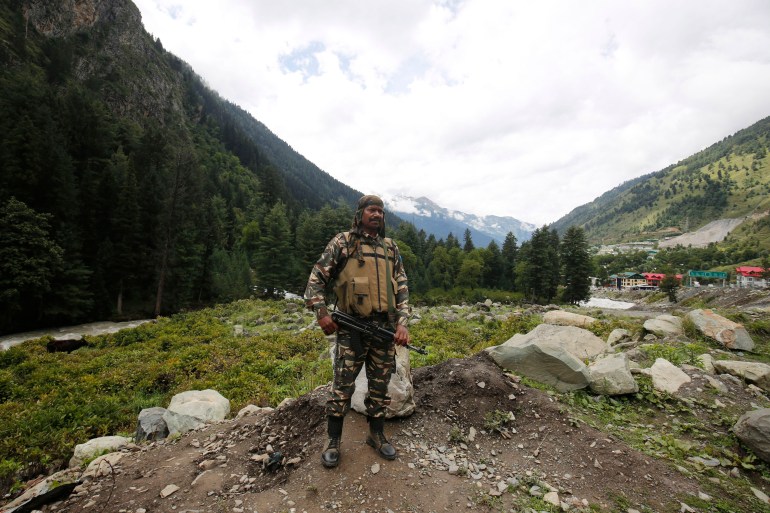 An Indian soldier stands guard along a highway leading to Ladakh, at Gagangir, some 81km (50 miles) from Srinagar [File: Farooq Khan/EPA]The high-altitude standoff began in early May with a fierce brawl and exploded into hand-to-hand combat with clubs, stones and fists on June 15 that left 20 Indian soldiers dead. China is believed to also have had casualties but has not given any details.

India and China have each stationed tens of thousands of soldiers backed by artillery, tanks and fighter jets and are bracing for a harsh northern winter in the cold-desert region, where temperatures can fall to minus 50 degrees Celsius (minus 58 Fahrenheit).

The nuclear-armed rivals have accused each other of crossing into rival territory and of firing shots for the first time in 45 years.

Relations between the two countries have often been strained, partly due to their undemarcated border. They fought a border war in 1962 that spilled into Ladakh and ended in an uneasy truce.

Since then, troops have guarded the undefined border and occasionally brawled. They have agreed not to attack each other with firearms.

India unilaterally declared Ladakh a federal territory and separated it from the disputed Indian-administered Kashmir in August 2019, ending the disputed region’s semi-autonomous status.

China was among the first countries to strongly condemn the move, raising it at international forums including the United Nations Security Council.