Efforts to free the ship using dredgers have yet to push the container vessel free, affecting billions of dollars worth of cargo.

Efforts to dislodge one of the world’s largest container vessels that has choked traffic along the Suez Canal have resumed at high tide, with five tugs working to drag the vessel to deeper water, according to ship-tracking data.

Marine services firm GAC issued a note to clients overnight on Wednesday, saying efforts to free the vessel using tug boats continued, but that wind conditions and the sheer size of the vessel “were hindering the operation”.

The Panama-flagged Ever Given ran aground diagonally across the single-lane stretch of the southern canal on Tuesday morning after losing the ability to steer amid high winds and a dust storm, the Suez Canal Authority (SCA) said in a statement.

It is now blocking transit in both directions through one of the world’s busiest shipping channels for goods, oil, grain and other products linking Asia and Europe, affecting billions of dollars worth of cargo.

So far, dredgers have tried to clear silt from around the massive ship. Ship-tracking software shows five tugs surrounding the Ever Given and three more heading towards it. On the shore, at least one backhoe could be seen digging into the canal’s sandy banks, suggesting the bow of the ship had ploughed into it.

The ship’s GPS signal shows only minor changes to its position over the past 24 hours. 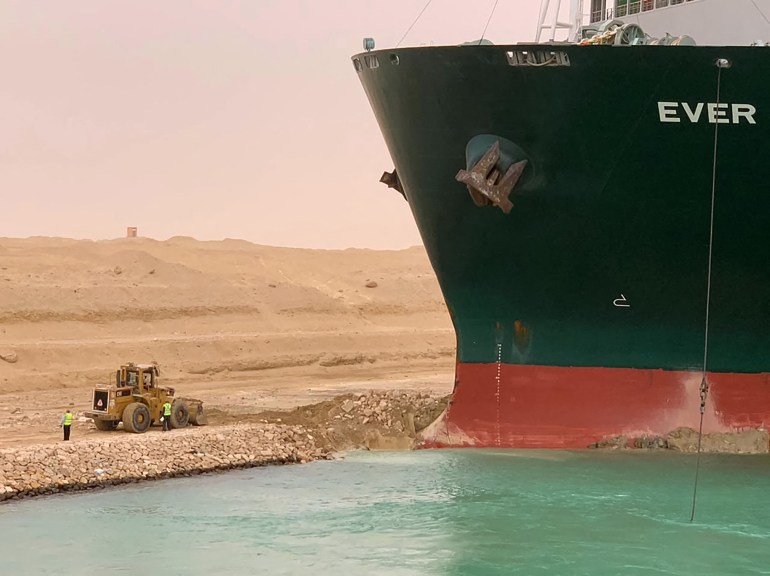 A handout picture released by the Suez Canal Authority on March 24, 2021, shows a part of the Taiwan-owned MV Ever Given lodged sideways and impeding traffic across the Suez Canal [Suez Canal/AFP] 150 ships waiting for the blockage to clear

Several dozen vessels, including other large container ships, tankers carrying oil and gas, and bulk vessels hauling grain are waiting backed up at either end of the canal, creating one of the worst shipping jams seen in years.

Roughly 30 percent of the world’s daily shipping container volume transits through the 193km (120-mile) Suez Canal, and about 12 percent of total global trade of all goods.

Canal service provider Leth Agencies said at least 150 ships were waiting for the Ever Given to be cleared, including vessels near Port Said on the Mediterranean Sea, and the port of Suez on the Red Sea and those already stuck in the canal system on Egypt’s Great Bitter Lake.

Cargo ships already behind the Ever Given in the canal will be reversed south back to Suez to free up the channel, Leth Agencies said. Authorities hope to do the same with the Ever Given when they can free it.

Shipping experts say that if the blockage does not look likely to be cleared within the next 24 to 48 hours, some shipping firms may be forced to re-route vessels around the southern tip of Africa, which would add roughly a week to their journey.

But the chairman of the Suez Canal Authority told media that despite the blockage, some cargo was able to move south and that efforts to dislodge Ever given would continue. 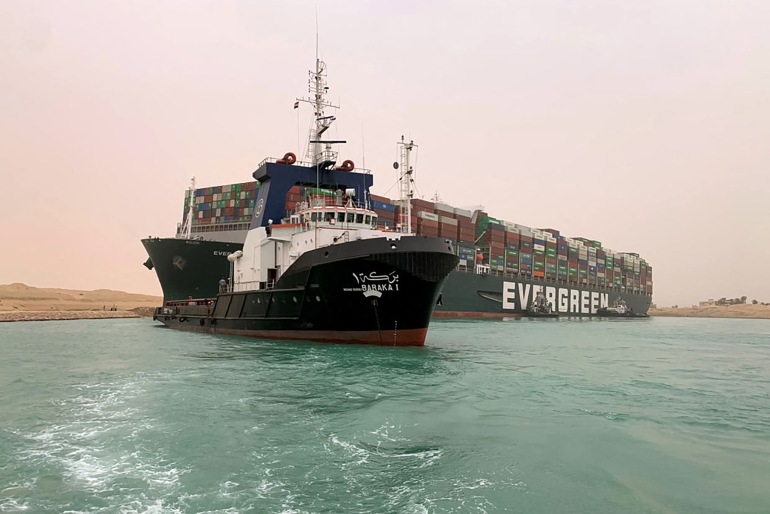 The Ever Given ran aground in the Suez Canal after a gust of wind blew it off course, bringing marine traffic to a halt along one of the world’s busiest trade routes. [Suez Canal/AFP] Oil, gas shipments affected

Tuesday marked the second major incident involving the Ever Given in recent years. In 2019, the cargo ship ran into a small ferry moored on the Elbe River in the German port city of Hamburg. Authorities at the time blamed strong wind for the collision, which severely damaged the ferry.

The closure could affect oil and gas shipments to Europe from the Middle East, which rely on the canal to avoid sailing around Africa. The price of international benchmark Brent crude stood at more than $63 a barrel on Thursday.

Opened in 1869, the Suez Canal provides a crucial link for oil, natural gas and cargo. It also remains one of Egypt’s top foreign currency earners. In 2015, the government of President Abdel Fattah el-Sisi completed a major expansion of the canal, allowing it to accommodate the world’s largest vessels. However, the Ever Given ran aground south of that new portion.

The stranding of the container ship marks just the latest incident to affect mariners amid the pandemic. Hundreds of thousands have been stuck on board vessels due to the pandemic. Meanwhile, demands on shipping have increased, adding to the pressure on tired sailors.