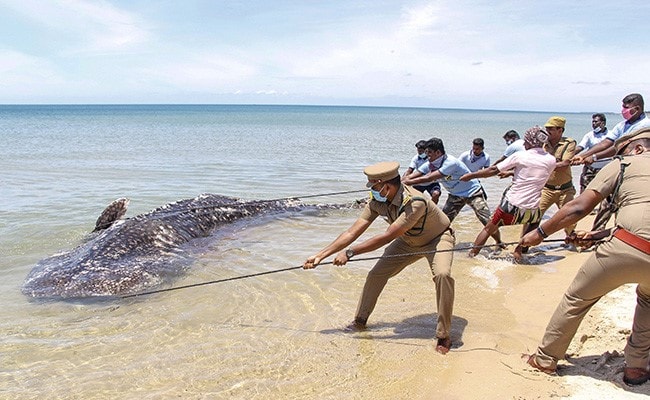 The 18-foot-long, one sperm whales are less common in the Palk Bay, the Gulf of Mannar, an official said

Forest officials later buried it on the beach after conducting an autopsy. Oil and wax products were found from the upper jaw and small intestine of the whale, which are used to make medicine.

Forest officials are investigating the matter to confirm whether it was hunted to dispatch the drug, or was it unable to swim towards the deep seas after being wounded on the rocks.

Forest Officer Sathish said, "The whale species, an 18-foot-long, one sperm whale, washed ashore on the beach near Atrankarai in Ramanathapuram district. These are less common in the Palk Bay and the Gulf of Mannar, and only four have been seen in the past four years."

"It is wrong to catch such rare creatures. It violates the 1972 Wildlife Protection Act, under which imprisonment ranges from 3 years to 7 years. Therefore, when such fish are found in the sea, I request the fishermen to inform the forest department and take steps to save the fish," he said.

What should I know about the delta variant?