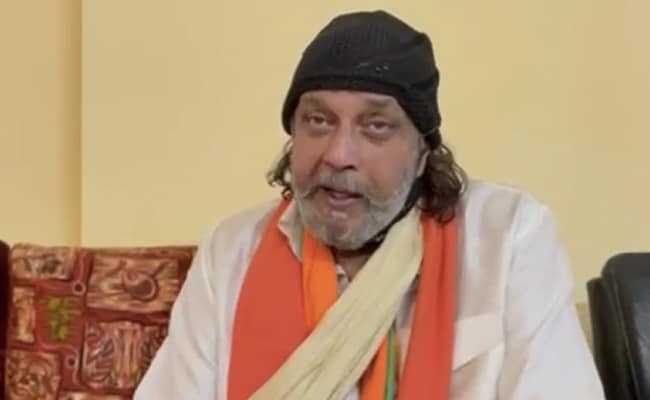 Actor Mithun Chakraborty, who joined the BJP today in Bengal, said the reason behind his move was his lifelong dream to help the poor and added that he is confident that the party will win the assembly election in the state.

Talking to reporters after joining the party at a massive rally today, the actor said that only one party is helping the poor and if he wants to fulfil his dream, he must hold someone's hand.

"You can me selfish or anything else. But the reason behind my selfishness is that I want to be with poor people, I want to fight for them," Mr Chakraborty, 70, told reporters.

"Since I was 18-years-old, I had a dream that I will stay with the poor people, I will help them, I will get them their due respect," the National Award winning-actor said adding that even his movies are also about this.

He also said the senior leaders of the BJP has made the party a great success in the state. He added that he is confident that BJP will win the Bengal elections that will be held in eight phases from March 27.

"BJP is making the government, that's for sure. And if we can all fulfil the Prime Minister's dream of a Sonar Bangla, I will be the proudest man," Mr Chakraborty adds.

Saying that he has never been associated with any party before, Mr Chakraborty said that the Trinamool Congress had made him a Rajya Sabha MP and it was his "bad decision".

"I left (as Rajya Sabha MP), I don't want to point fingers at anyone that it was their fault. It was my bad decision. Let's end that topic here," the actor adds.

Mithun Chakraborty quit the Trinamool within two years of his Rajya Sabha nomination after he was named in the Saradha chit fund case. He was questioned by the Enforcement Directorate on Rs 1.2 crore he had received from the group as fee for becoming brand ambassador of a TV news channel the Saradha group financed.

He returned the money and quit the Rajya Sabha as well as the Trinamool Congress pleading poor health.

He added that he has always worked for the poor but never publicized it.

"Jaante to sabhi hai ke dada kya karte hai (Everyone knows what dada does)," he adds. Mr Chakraborty, who has a huge fan following in Bengal, is called "Mithun-da" by everyone.

Ever since RSS chief Mohan Bhagwat visited Mithun Chakraborty at his bungalow in Mumbai on 16 February, there had been speculation the actor may join the BJP.

In a kurta, cap and sunglasses, the actor today accepted the BJP flag and waved to the crowd at a huge rally addressed by Prime Minister Narendra Modi to campaign for the Bengal election.

No link between poll rallies and surge in Covid cases: Himanta Biswa Sarma