March 23 -- Forecasters are concerned about brief but intense winds across Southern California that could lead to multiple hazards, including heightened fire danger, across the drought-stricken landscape.

A storm that tracked along the Sierra Nevadas on Monday night will churn up the gusty Santa Ana winds over the mountains and through the canyons of Southern California.

"Thankfully, this event does not look to be of the prolonged, days long variety," AccuWeather Meteorologist Mary Gilbert said.

"The greatest opportunity for the strongest winds will be confined to the hours between Tuesday evening and Wednesday morning." 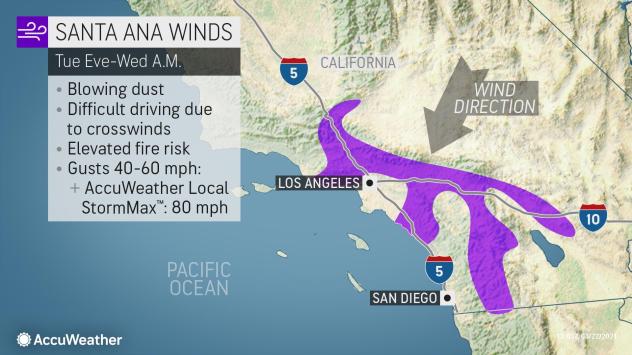 Gusts from 40-60 mph will be common for the majority of the typical wind-prone areas, with some of the highest elevations likely to experience gusts up to 80 mph.

Even with the wind event's short duration, forecasters caution residents to not let their guard down as the gusty conditions can pose an array of dangers.

"These strong winds can make for difficult travel at times along portions of Interstate 5 and I-10 and can present a significant rollover risk for any high-profile vehicles," Gilbert said.

Although stray showers may occur in the high terrain as the storm passes, forecasters say most of the region is likely to stay dry -- which will increase the risk of blowing dust and reduced visibility as the winds howl through the deserts.

Since much of Southern California is still in the midst of at least moderate drought conditions, the combination of dry fuels and strong winds can also raise fire danger concerns during the Santa Ana event. 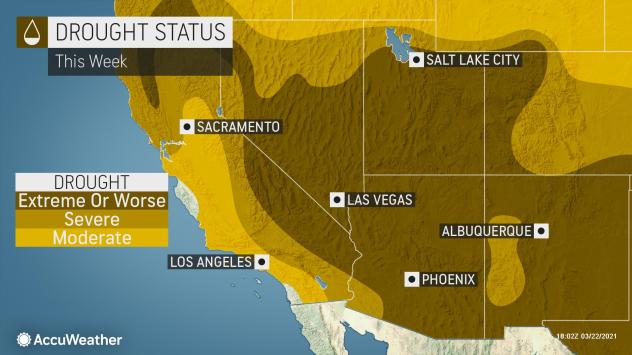 Most of the region has fared much better in terms of precipitation so far this month, when compared to February.

For example, downtown Los Angeles has received 1.41 inches of rain month-to-date after only picking up a trace in February -- typically the city's wettest month of the year. San Diego is on an average pace for its March precipitation, sitting at 1.43 inches month-to-date. This, after ending February with 0.10 of an inch of rain or 4 of average.

Despite the increased rain opportunities this month, the region's last measurable rainfall was over a week ago, and the precipitation that fell earlier this month has not been enough to fully quench the ground and extinguish fire danger.

Forecasters urge residents to avoid using outdoor flames of any sort until the winds diminish, as the sparks could quickly light the dry brush and create a fast-moving wildfire.

The good news is that the winds will diminish fairly quickly, and will likely ease by Wednesday afternoon. However, another round of gusty conditions could arrive as early as later this week.