A statement issued by the court on Tuesday cited “complicity in assassination” and an “attack on state security” by Compaore, who ruled the country until 2014, when he was forced to resign in the face of mass demonstrations against an attempt to extend his 27-year rule.

Thirteen others – including Gilbert Diendere, Compaore’s right hand man, and Hyacinthe Kafando, his security chief – were also indicted on charges ranging from “assassination” to “concealment of corpses”.

Benewende Stanislas Sankara, a lawyer representing the relatives of the slain former president, described the indictment as “a victory and a step in the right direction”.

“It’s with a sigh of relief the family can now go ahead with all the guarantees that surround Burkinabe justice,” he told Al Jazeera. “We can now calmly go to trial.”

Burkina Faso’s communications minister said an official government statement on the indictment will likely be issued on Wednesday. Eddie Komboigo, leader of the Compaore-founded Congress for Democracy and Progress (CDP) party, declined to comment on the court’s announcement.

Compaore, who has been in exile in neighbouring Ivory Coast since 2014, has always denied involvement in Sankara’s assassination. 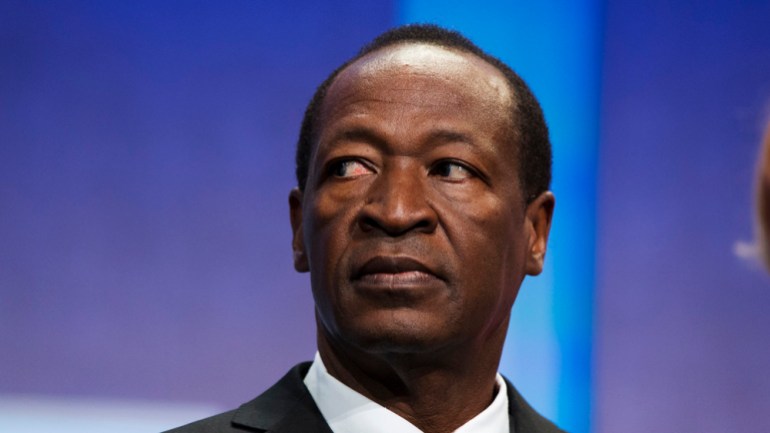 Compaore was forced to resign after mass protests against his attempts to extend his 27-year rule [Lucas Jackson/Reuters]Sankara took power in 1983, but he was killed aged 37 along with 12 other government officials during a coup led by Compaore on October 15, 1987.

Many Burkinabes regard Sankara as a national hero. A prominent pan-Africanist, he is sometimes also referred to as the continent’s “Che Guevera”, in reference to the Argentinian Marxist revolutionary who led a number of armed struggles, including in Cuba.

In 2015, authorities exhumed what are thought to be Sankara’s remains from a grave in Dagnoen, on the outskirts of Ouagadougou. Sankara’s widow said an autopsy revealed his body was “riddled with more than a dozen bullets”.

To this day, graffiti calling for “Justice for Sankara” is a common sight throughout the capital.

“It is a matter for the Burkinabe people – and, I have to say, the African people. So this transcends Thomas Sankara’s family,” said Benewende Sankara.

Following his re-election last year, President Roch Kabore appointed a minister for national reconciliation, Zephirin Diabre, who pledged to address the issue of justice for Sankara.

In 2015, Burkinabe courts had issued an international arrest for Compaore, but Ivorian President Alassane Ouattara has prevented his extradition back to Burkina Faso despite an extradition treaty between the two countries.

During his election campaign in the lead-up to the November 2020 polls, Kabore had also said he would be open to Compaore returning to the country to live out retirement.

A national debate ensued over whether the former president, now 70, should face trial upon his return or be effectively pardoned in the interests of national reconciliation.

“The warrant can be executed at any time if Cote d’Ivoire and Burkina Faso implement the existing agreements between the two states properly,” Benewende Sankara said. “I must specify that it can happen very quickly.”

Tuesday’s indictment may put further pressure on Ivory Coast to follow through on the extradition treaty.

It is unclear when the trial will take place.

Sankara’s relatives initially brought the case to the courts in 1997. It was closed soon after, before being reopened by the country’s then-transitional government in 2015.

“We can say that the Sankara case has now passed all the stages needed to see judgement,” Lassane Sawadogo, executive secretary of the ruling People’s Movement for Progress party (MPP) told Al Jazeera.

“This represents a decisive step forward for the manifestation of the truth.”