The South American country has the world’s second-highest death toll after the United States.

One year after the first confirmed case of the coronavirus in Brazil, Latin America’s biggest country has recorded more than 250,000 deaths from COVID-19, with the virus still spreading as a national vaccination drive struggles to gain momentum.

President Jair Bolsonaro, a far-right populist who has railed against lockdown measures while saying he will not take any COVID-19 vaccine, has been criticised for his response to the virus.

The highly contagious respiratory disease has killed 251,498 people in Brazil, the Health Ministry reported on Thursday evening, with 1,541 deaths reported in the previous 24 hours.

The situation in Brazil appears to be deteriorating, thanks to a new variant that researchers believe is more contagious. Over the past two weeks, Brazil has recorded the highest daily average of coronavirus deaths since the start of the pandemic – nearly 1,100 – exceeding the previous peak at the end of July.

“The virus is circulating without any control,” said Christovam Barcellos, of the country’s federally funded Fiocruz biomedical institute, which is manufacturing Brazil’s allotment of the AstraZeneca COVID-19 vaccine. 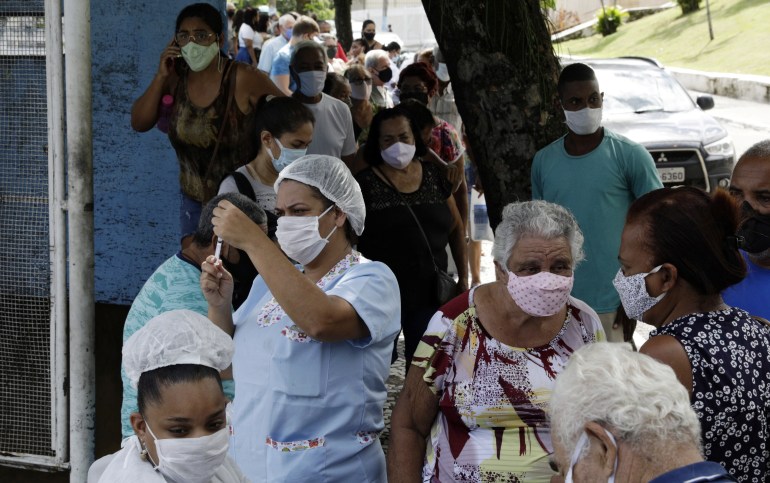 Brazil has begun its vaccination campaign against the coronavirus with some 7.5 million shots given so far [Ricardo Moraes/Reuters]Brazil is experiencing “a second plateau,” he said. “It’s not a second wave, because we’ve been over five weeks with 1,000 deaths per day.”

The virus is now spreading mainly through cities in Brazil’s vast interior, officials say, aided by a lack of national or even local lockdowns, which means Brazilians are moving freely across the continent-sized country.

That has been crucial for the spread of the new variant from Amazonas state, which has caused international alarm and led to a frosty reception for Brazilians hoping to travel internationally. According to the Health Ministry, the new strain has been identified in at least 17 Brazilian states.

After a slow and politically turbulent start, Brazil has managed to begin vaccinations, with more than 7.5 million shots given so far in a country of more than 210 million people.

The COVID-19 vaccine developed by China’s Sinovac Biotech, currently Brazil’s main tool to slow the virus, is effective against the UK and South African variants, the vaccine’s Brazilian partner said last week. Tests to see whether it works with the Amazonas strain are continuing.

But Brazil is struggling to get hold of enough vaccines amid a global scramble for supplies. The Health Ministry, which only has two supply contracts, has so far received just 16 million doses.