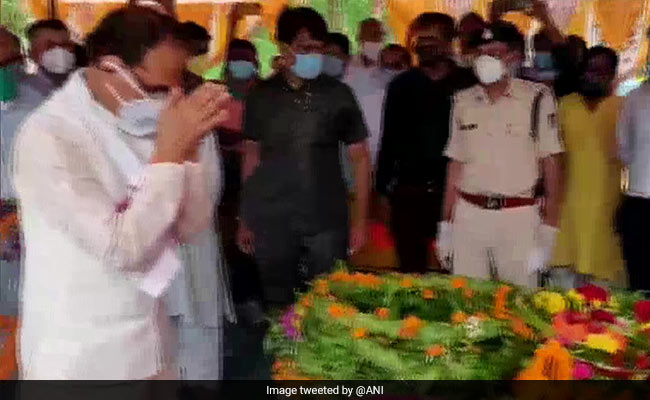 The mortal remains of Naik Deepak Singh who was killed in eastern Ladakh in the clashes with Chinese soldiers were consigned to flames with full honours in his village in Madhya Pradesh on Friday.

His elder brother lit the pyre during the last rites at village Faranda in Rewa district amid chants of "Long live Deepak Singh".

Chief Minister Shivraj Singh Chouhan and state BJP president V D Sharma lent shoulder to the coffin of the martyred soldier after it arrived in the village.

The state government will provide an honorarium of Rs one crore to Singh's family members along with a pucca house and his wife will be given a government job, Mr Chouhan said.

A road will be named for the martyred soldier and his statue will be installed in the village, he announced.

"We all are proud that we had a valiant soldier like Deepak Singh in Madhya Pradesh, from this village. I express my sincere gratitude to his parents for giving birth to such a courageous man," the chief minister said.

He salutes Deepak Singh's sacrifice who laid down his life for the nation happily, he added.

Deepak Singh, who joined the Army in 2013 and was posted in Ladakh's Galwan valley with Bihar Regiment, had married only last year.

His father Gajraj Singh is a farmer, while elder brother Prakash Singh is also an armyman and is posted at Jaisalmer.

"I will come by taking leave after lockdown ends," Deepak had told his grand-mother during their last conversation.