Blue Flu: Atlanta police call out of work in wake of charges

The police department in the United States city of Atlanta reassured residents on Thursday that it can still protect the city even though officers are calling out in larger numbers than normal, a day after prosecutors charged a member of the force with murder for shooting a man in the back.

Prosecutors brought felony murder and other charges against the white officer who shot Rayshard Brooks, saying that Brooks was not a deadly threat and that the officer kicked the wounded Black man and offered no medical treatment for more than two minutes as he lay dying on the ground. Another officer is being charged with aggravated assault.

Hours later, the Atlanta Police Department tweeted late on Wednesday that it had more officers calling out than normal but that it had "enough resources to maintain operations & remain able to respond to incidents."
"The Atlanta Police Department is able to respond effectively to 911 calls. Please don't hesitate to call if you have an emergency," the department tweeted Thursday.

Mayor Keisha Lance Bottoms, who has issued orders calling for reforms in policing, also insisted that the department would be able to operate effectively despite the callouts and said many of the department's partner agencies had been notified in case they needed to call in others.

Earlier suggestions that multiple officers from each zone had walked off the job were inaccurate. The department is experiencing a higher than usual number of call outs with the incoming shift. We have enough resources to maintain operations & remain able to respond to incidents.

"If we have officers that don't want bad officers weeded out of the force then that's another conversation we need to have," Bottoms said on CNN.

The decision to prosecute the officers came less than five days after the killing rocked a city - and a nation - already roiled by the death of George Floyd after more than eight minutes under a police officer's knee in Minneapolis late last month.

Floyd's death set off nationwide protests that have urged an extensive rethink of policing and an examination of racism in the US.

Police in New York City may be trying to go on an official strike on July 4, US Independence Day, according to The New York Post newspaper. It said flyers and a text message circulating among officers is encouraging them to call in sick, or request an ambulance to take them home from work if they do show up.

Brooks's funeral is set for Tuesday at Atlanta's historic Ebenezer Baptist Church, which was Martin Luther King Jr's congregation, the Reverend Raphael Warnock announced. Tyler Perry, the actor and filmmaker, has offered financial help for the services, officials said in announcing the funeral.

Police were called to a Wendy's last week about complaints of a car blocking the drive-through lane. An officer found Brooks asleep behind the wheel, and a breath test showed he was intoxicated. Police body-camera video showed Brooks and officers having a long, relatively calm conversation before things rapidly turned violent when officers tried to handcuff him.

Officer Garrett Rolfe shot Brooks after the 27-year-old Black man grabbed a Taser and ran, firing it at the officer, Fulton County District Attorney Paul Howard said. But when the officer fired his gun, Brooks was too far ahead of him for the Taser to be a danger, and it had already been fired twice, so it was empty and no longer a threat, Howard said.

"I got him!" Howard quoted Rolfe as saying.

"Mr Brooks on the night of this incident was calm, he was cordial and really displayed a cooperative nature," Howard said.

A lawyer for two witnesses said Thursday that the shooting could have been avoided and that officers need to be held accountable.

"As the video shows, this could have been avoided by just letting him run away, giving him another day, but instead a family has lost a father, a loved one, a friend," lawyer Shean Williams said at a Thursday news conference. "This community has lost a man."

Williams's client Michael Perkins, who was a passenger in a car that arrived in the drive-through lane just minutes before the shooting, said that when he heard officers telling Brooks to stop resisting, he predicted that Brooks would end up getting shot.

"It's just what I felt like was going to happen because that's what's been happening lately," he said Thursday during a news conference at his lawyer's office in downtown Atlanta. "These cops have been killing people."

Prosecutors also announced charges of aggravated assault and violation of his oath against a second officer, Devin Brosnan, who the district attorney said stood on Brooks's shoulder as he struggled for his life. 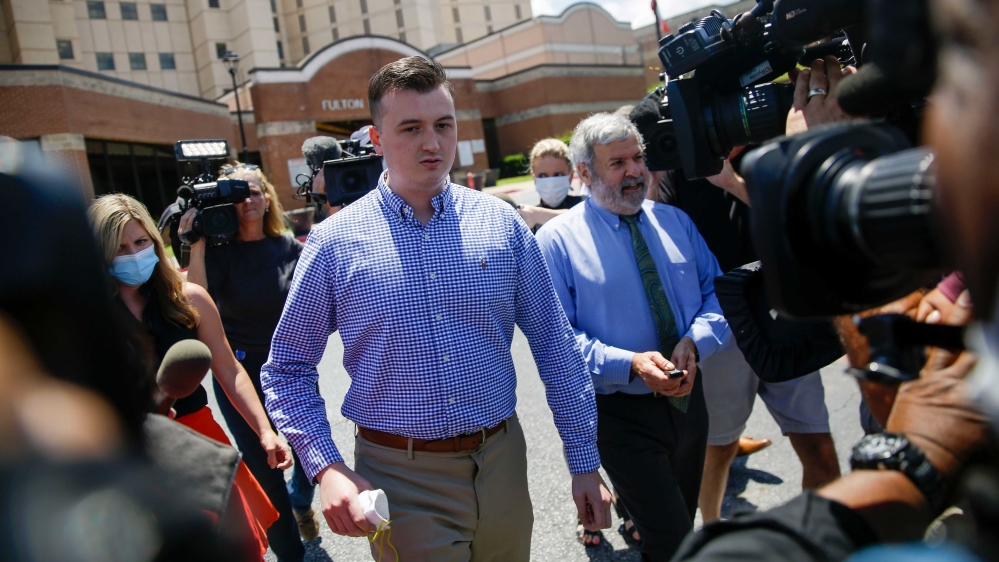 Rolfe's lawyers said he feared for his and others' safety and was justified in shooting Brooks. Rolfe opened fire after hearing a sound "like a gunshot and saw a flash in front of him", apparently from the Taser.

"Mr. Brooks violently attacked two officers and disarmed one of them. When Mr. Brooks turned and pointed an object at Officer Rolfe, any officer would have reasonably believed that he intended to disarm, disable or seriously injure him," the lawyers said in a statement.

The felony murder charge against Rolfe, 27, carries life in prison or the death penalty, but prosecutor Howard told CNN on Thursday that he would not seek it. Rolfe was also charged with 10 other offences punishable by decades behind bars.

The district attorney said Brosnan, 26, is cooperating with prosecutors and will testify as a state's witness. But one of his lawyers, Amanda Clark Palmer, denied he had agreed to be a prosecution witness that he was simple a witness and said Brosnan was not pleading guilty to anything.

Clark Palmer said the charges were baseless and that Brosnan stood on Brooks'shand, not his shoulder, for just seconds to make sure he did not have a weapon.

Brosnan turned himself in Thursday, his lawyer said. He did not speak to reporters as he later left. He said he would request $50,000 bond for Brosnan and no bail for Rolfe.

Rolfe also turned himself in on Thursday.

In the Minneapolis case, Derek Chauvin, the officer who put his knee on Floyd's neck for several minutes, has been charged with murder. Three other officers have been charged with aiding and abetting. All four were fired.