On his first visit to NATO headquarters, US secretary of state says he will also warn Germany about the Nord Stream 2 pipeline.

US Secretary of State Antony Blinken has pledged to rebuild and revitalise the transatlantic NATO military alliance and to share Washington’s “initial thinking” on any possible withdrawal from Afghanistan during his first visit to the alliance’s headquarters.

Blinken, speaking in Brussels on Tuesday at the start of two days of meetings with his European counterparts, added that he planned to warn Germany over the Nord Stream 2 pipeline being built from Russia to Germany, which he said ran counter to the EU’s own interests and could undermine Ukraine.

Accompanied at a brief news conference by NATO Secretary-General Jens Stoltenberg, Blinken said NATO was at a pivotal moment in facing threats around the world.

“The United States wants to rebuild partnerships, first and foremost with our NATO allies, we want to revitalise the alliance.”

Tuesday’s statements were a stark shift in tone from the four years of friction under Donald Trump, who said the alliance was obsolete, reportedly considered withdrawing from it, and repeatedly alleging European parties were not paying their fair share of NATO defence spending.

NATO’s European allies have been widely receptive to the new approach of President Joe Biden’s administration.

Stoltenberg said the alliance needs US support as it works to modernise several areas over the medium term, including climate measures and more sustainable funding of military operations.

Blinken’s visit comes as the US is weighing a May 1 deadline for US troop withdrawal from Afghanistan, which was established in a deal struck between the Trump administration and the Taliban armed group last year.

US troops in Afghanistan were slashed to 2,500 under Trump, the lowest in nearly two decades, and questions have been raised over the future of the 9,600-strong NATO mission operating in the country.

Blinken said a US review of options was still under way and he would share the administration’s “initial thinking” with during the upcoming meetings. He added any exit would be done in coordination with NATO.

“We went in together, we have adjusted together and when the time is right, we will leave together,” Blinken said.

Blinken also said he would raise concerns over the Nord Stream 2 pipeline when he meets his German counterpart Heiko Maas during the visit.

Germany is pushing for the pipeline’s completion, despite sustained US opposition for more than a decade.

The US fears Russia could use Nord Stream 2 as leverage to weaken EU states by increasing dependency on Moscow.

“President Biden has been very clear, he believes the pipeline is a bad idea, bad for Europe, bad for the United States, ultimately it is in contradiction to the EU’s own security goals,” Blinken said. 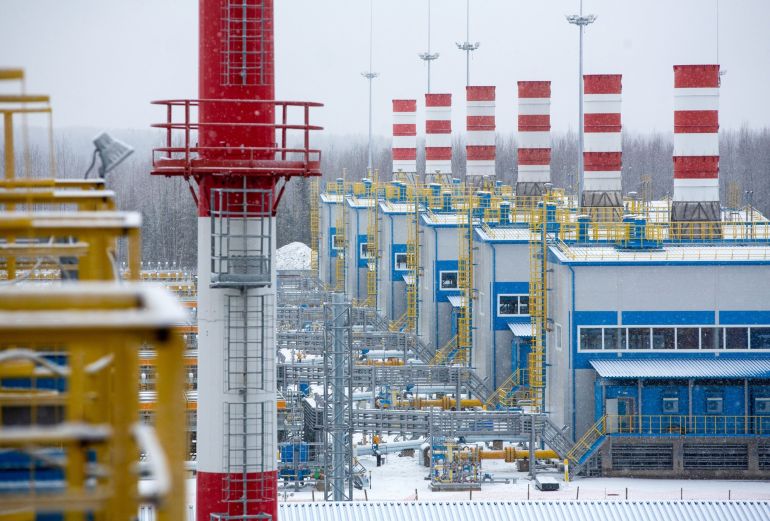 The Nord Stream 2 is a 1,230-kilometer (764-mile) gas pipeline that will double the capacity of the existing undersea route from Russian fields to Europe [Bloomberg]“It has the potential to undermine the interests of Ukraine, Poland and a number of close partners and allies,” Blinken said, saying that a US law required Washington to impose sanctions on companies participating in the Nord Stream 2 project.

It will also increase European energy dependency on Russia and compete with shipments of US liquefied natural gas.

The pipeline is already about 95-percent built, and could be finished by September, analysts who monitor tracking data say.