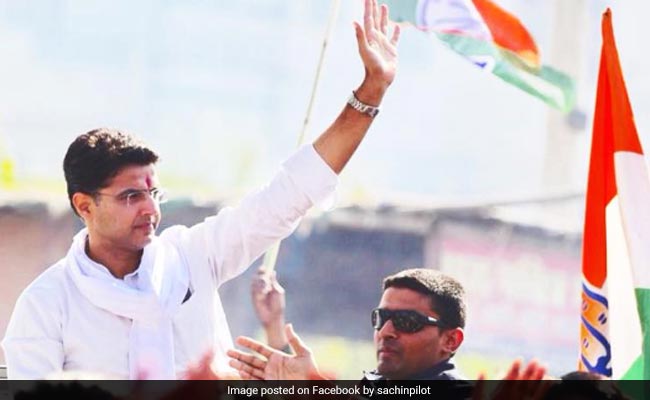 Sources close to Sachin Pilot said he has been in talks with the BJP. (File)

The BJP today said the crisis in the Congress in Rajasthan is "of its own making" -- similar to what it said when Jyotiraditya Scindia and his aides quit the party in Madhya Pradesh, pulling down the Kamal Nath government.

It is Rajasthan's deputy Chief Minister Sachin Pilot who is hugely upset now with his boss Ashok Gehlot and is camping in Delhi with several of his loyalist MLAs. Sources close to him said he has been in talks with the BJP, which started in March and ran parallely with the BJP's talks with Mr Scindia. The BJP has denied any talks.

"The buying and selling of MLAs in Rajasthan is a fabricated story. It is a film whose script writer, producer, director and actor are all one person. The goal is to resolve the disintegration of your party with its own president," the BJP's Union Minister Gajendra Shekhawat said in a Hindi tweet today, pointing to Mr Gehlot's accusations in this regard.

Another tweet from him read, "BJP lead Congress Mislead."

Mr Gehlot has claimed that the BJP has been attempting to grab power in the state by bribing MLAs, the way they did in Madhya Pradesh. Yesterday, he said the BJP was offering MLAs up to Rs 15 crore to switch allegiance. "You saw this in Goa, Madhya Pradesh and the north-eastern states," Mr Gehlot told NDTV.

Mr Pilot has been left upset by a letter asking him to appear for questioning by the Special Operations Group in an investigation related to the horse-trading claim.

The Chief Minister has pointed out that he and party chief whip Mahesh Joshi, who filed the complaint have also received summons for questioning.

"No one is above the law," sources quoted him as saying.

In March, the Kamal Nath-led government in Madhya Pradesh collapsed as Jyotiraditya Scindia switched sides with 23 loyalist MLAs. Mr Nath had alleged then that the BJP was bribing the MLAs and trying an "Operation Lotus" -- a term coined during a similar exercise in Karnataka.

The BJP denied the accusations, pointing to the internal troubles of the Congress. This time, it is yet to offer an official response.

Both Mr Scindia and Mr Pilot - once among the closest aides of Rahul Gandhi - have been left to fend for themselves after Mr Gandhi stepped down from the party chief's post following the party's decimation last year in the Lok Sabha elections. Both leaders, who have a huge mass following, have been hopeful of being rewarded with top posts after the party's comeback in the two heartland states of Madhya Pradesh and Rajasthan in 2018.  But ahead of the Lok Sabha elections, they made a climbdown after Mr Gandhi's interception.