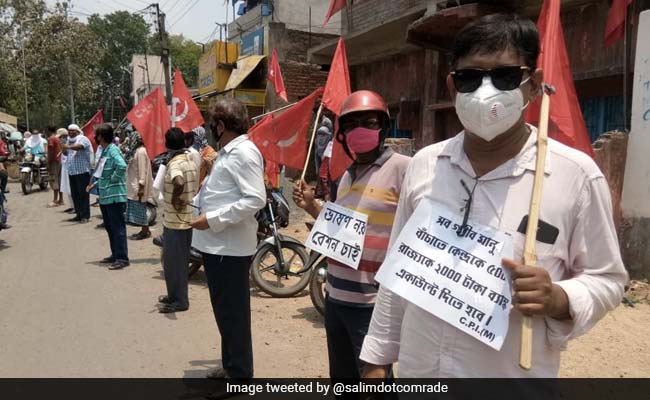 The CPI(M) held protests at various places across West Bengal on Tuesday against Amit Shah's virtual rally through which the Home Minister addressed the people of Bengal from Delhi.

The party also protested in Kolkata against Amit Shah's virtual rally for allegedly indulging in politics when the people of the state are suffering.

CPI(M) politburo member Mohammad Salim said while the people of the state are distressed by the coronavirus outbreak, the economic crisis and the impact of Cyclone Amphan, Mr Shah is asking for their votes.

"Amit Shah is making promises of creating a 'Shonar Bangla' (golden Bengal), but in reality, he is trying to make the Bengali-speaking people of the country third-class citizens in the name of CAA and NRC," the former MP said.

The BJP-led centre has not taken any step against Mamata Banerjee's government in West Bengal over alleged irregularities in the implementation of various central projects in the state, including the PM Awas Yojana and Sadak Yojana, he added.

Mr Salim claimed that though the BJP leadership is making a lot of noise against the Trinamool Congress (TMC) government in the state, the centre has not acted against it on any of the issues.

He accused the BJP and TMC leadership of being hand-in-glove with each other.

The Left leader alleged that while the BJP sent democracy into quarantine, Mamata Banerjee sent it to the Intensive Care Unit (ICU).

"Amid the present coronavirus crisis in the country, there is an urgent need for increasing the number of days under the MGNREGA 100-day job guarantee scheme to 200 days, but nothing is being done for the benefit of the rural and urban poor," he said.

Mr Salim claimed that instead of looking after the suffering migrant workers, the Narendra Modi-government is more interested in protecting the interests of the business owners.

He questioned the logic behind the centre's decision to go for a nationwide lockdown when there were a few hundred coronavirus cases and easing it when the number has crossed two lakhs.

Alleging that adequate number of coronavirus tests was not being done in the country, the CPI(M) leader claimed that the centre had not ramped up the healthcare infrastructure during the two-and-a-half-month-long lockdown.

Mohammad Salim alleged that both the BJP government at the centre and the TMC government in the state have failed to effectively tackle the coronavirus pandemic.

"Both the governments are hiding true figures related to the affected persons," he claimed.