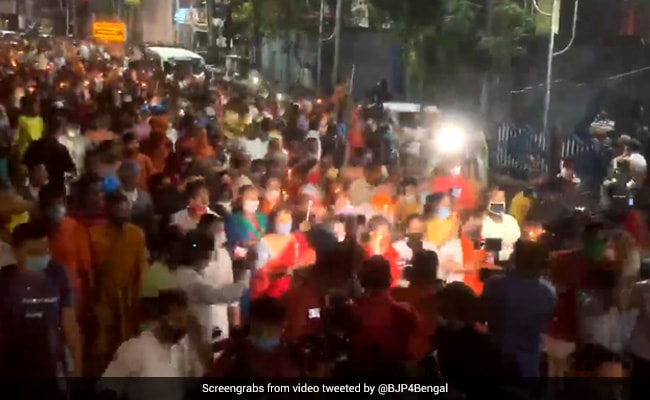 BJP activists, led by its state unit president Dilip Ghosh, participated in a silent candlelight procession on Friday to protest against the alleged police attack on party activists during their march to the state secretariat on October 8.

Dilip Ghosh alleged that the state police had mounted an unprovoked assault on BJP Yuva Morcha (BJYM) members during the march and sprayed coloured chemicals on them, besides lobbing tear gas shells and crude bombs at them.

"But we (BJP) believe in the non-violent democratic form of protest. We are taking out this rally to Mayo Road to remove the darkness pervading the state due to the lawlessness and partisan role of the police. There won't be any slogans," he told reporters.

Hundreds of BJP activists, BJYM and its Mahila Morcha participated in the rally which covered a distance of one km on the arterial Central Avenue to reach the venue near the Gandhi statue on Mayo Road.

The rallyists carried placards denouncing the "police attack on the BJP during democratic protests", besides candles.

Defying COVID-19 regulations, a combative BJP had mustered thousands of its workers on the streets of Kolkata and Howrah on Thursday for a march to the state secretariat over allegedly deteriorating law and order, provoking a crackdown by police which left scores injured, eyewitnesses and officials said.

Mr Ghosh claimed that over 100 BJP members, including party leaders, were injured in the attack by the police during the march and many of them are still under treatment.

Senior state leader Sayantan Basu, who also took part in the candlelight procession, said the party will intensify its programmes in the coming days to protest against the "attack" by police on BJP workers in collusion with the ruling Trinamool Congress.