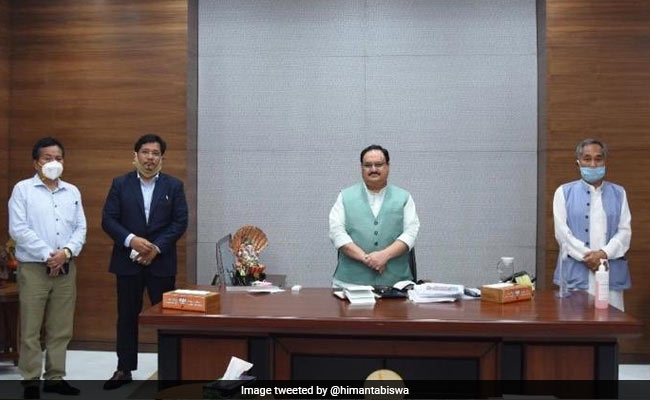 The four National People's Party (NPP) MLAs in Manipur who quit chief minister N Biren Singh's coalition government last week and pushed it to the brink of a collapse returned to the fold today and withdrew the resignation letter they had submitted to the governor on June 17.

A key reason for the rebellion was the alleged 'highhandedness' of Mr Singh. The MLAs had said he must be removed. But BJP general secretary Ram Madhav, who was in Imphal, categorically ruled that out.

"There is no instability in Manipur. Under the leadership of Chief Minister Biren, we will like to complete a five-year term as government. We have secured the support of many MLAs who want a stable government in Manipur," Mr Madhav said.

Back in Imphal this afternoon with the MLAs, Mr Sangma said, "We expressed our grievances to Amit Shah and JP Nadda. Both understood what the problem is and promised to address them. After their assurance, we decided to withdraw our resignation and continue to support the BJP-led government," Mr Sangma said.

"The MLAs will return to the government as ministers though there may be a change of portfolios," he added. Three of the NPP MLAs were senior cabinet ministers and the fourth was the deputy chief minister in the N Biren Singh government when they quit.

Y Joykumar Singh was deputy chief minister with five portfolios till 9 April when N Biren Singh stripped him of all after controversial comments about the government's inadequate food relief during the coronavirus lockdown.

In fact, it was this incident that lit the fire of rebellion, as it were, that culminated on June 17 with the resignation of the four NPP MLAs from the government.

The four NPP MLAs were not the only ones to resign that day. Five others did too, among them the BJP MLAs, a Trinamool MLA and an Independent. The Trinamool MLA was disqualified by the Speaker during the Rajya Sabha vote on 18 June. The status of the four others could not be ascertained.

Meanwhile, unconfirmed reports say at least two Congress MLAs were poached by the BJP and all eyes are on whether Congress will continue to press for a floor test in the Assembly now.

On June 17, the nine rebel MLAs joined hands with the Congress to set up the Secular Progressive Front and initiated the bid to topple N Biren Singh by calling for an Assembly session to move a no confidence vote.

After a 9-day drama, the status quo in Manipur is restored, though given the state's volatile politics the last word may not have been said yet. Manipur elections are due in 2022.

Bengal BJP Cautions Leaders Against Commenting On Division Of State