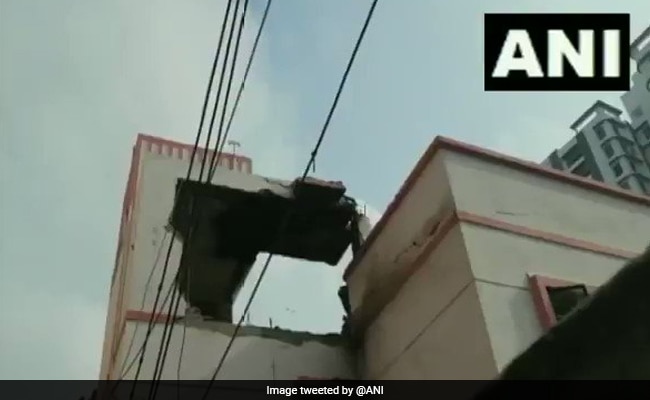 No one was injured in the blast, which occurred on the second floor of the club at around 5 am.

The BJP Tuesday demanded NIA probe into the Beleghata blast and accused the ruling TMC of trying to create tension in the area ahead of the 2021 assembly polls.

The TMC refuted the charge and said the saffron party should not politicise every incident.

An explosion early on Tuesday blew off a club's asbestos roof and damaged a portion of its wall at Beleghata in the eastern part of the city sparking fear among the locals, a senior police officer said.

No one was injured in the blast, which occurred on the second floor of the club at around 5 am.

Senior BJP leader and its West Bengal minder Kailash Vijayvargiya said, "We demand an NIA probe into the incident. The state police will try to hush-up the incident like the others. Only a probe by a central agency like the NIA can unravel the truth".

Earlier in the day, Mr Vijayvargiya had in a tweet accused the city police of trying to suppress the case and shield "conspirators of the ruling party (TMC) behind the incident".

He alleged that the ruling Trinamool Congress is trying to create "great chaos" before the 2021 state assembly election due in April-May.

"Evidence in this regard was today found when a horrific explosion took place at a club on Beliaghata Main Road. The roof of the club was blown off and fell several meters away. It is suspected that a huge quantity of explosives was kept hidden there," Mr Vijayvargiya said in a tweet in Hindi.

"I was stopped by the police from visiting the area. Bombs are being exploded in every corner of the state. We will write to Union Home Minister Amit Shah Ji, demanding NIA probe into the incident," she said.

"There is no question of a NIA probe. The Kolkata Police sleuths are competent enough to investigate it. The BJP should stop trying to politicise every incident in the state. It is trying to vitiate the atmosphere of the state," he said.

A team of forensic experts collected evidence from the site and sniffer dogs were pressed into service to facilitate investigation. Splinters were recovered from the spot, the police officer said.