As the first wave of COVID-19 hit Wisconsin in April, Alexandra Nichole Salazar Vasquez, 27, a PhD student in Milwaukee, planned to vote for Bernie Sanders in the primary. Knowing there would be longer lines in her low-income community, she felt nervous about voting in person. She lacked health insurance and lived in a multi-generational household, so she requested an absentee ballot.

“It would affect more than just me, so going out to vote was not an option for me – it was too much of a risk.”

The lines were longer than she imagined. Poll workers stayed home to avoid the virus, leaving Milwaukee with only five polling stations instead of the usual 180. 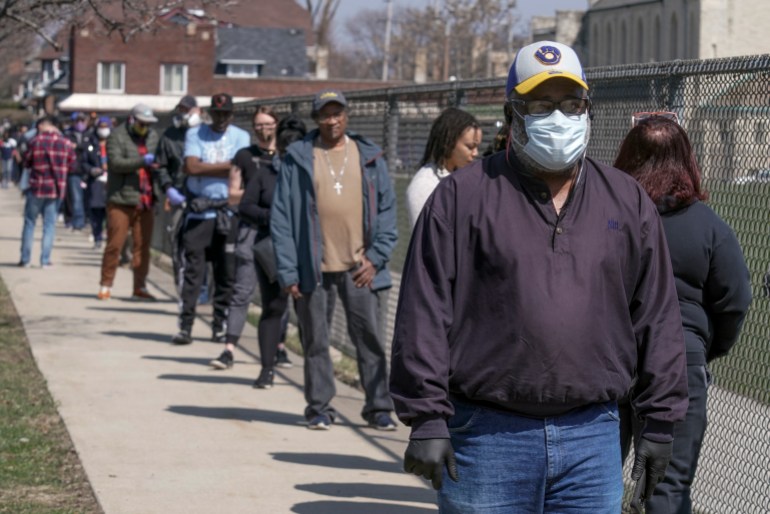 Voters observe social distancing guidelines as they wait in line to cast ballots in the presidential primary election in Milwaukee, Wisconsin, on April 7, 2020 [File: Morry Gash/AP Photo]Her ballot did not arrive on time, so she could not vote. “Are you kidding me?” she thought when she received it more than a month late.

This election, she plans to vote for Joe Biden but fears her ballot will not be counted again.

This is the tension playing out in Wisconsin ahead of election day: people in Milwaukee, which is 40 percent African American, report feeling motivated to vote, but they are up against one of the strictest voter identification laws in the country, enacted in 2016. A study found the voter ID law deterred 11.2 percent of eligible voters, mostly from low-income and minority communities in Dane and Milwaukee counties in 2016 – between 16,801 and 23,252 people.

Donald Trump won Wisconsin in 2016 by only 22,748 votes. It was one of the tipping-point states that secured Trump’s victory. Supported by white voters in rural and suburban areas, he flipped 22 counties that voted for Obama in 2012.

With higher turnout expected in the presidential election and Wisconsin now a hotspot for COVID-19, voters fear a repeat of the primary.

State of the race

What makes Wisconsin a battleground state is a combination of factors that handed Trump victory in 2016: depressed turnout for Hillary Clinton, third-party candidates attracting ballots, plus white voters without college degrees and white suburban voters who streamed to the polls for Trump, turning the state red for the first time since Ronald Reagan won it in 1984.

Polls showed Clinton with a healthy lead, but voters who made up their minds in the last week of the election took a leap of faith for Trump. Fourteen percent of Wisconsin voters decided their presidential vote in the final week, according to exit polls. Of those 14 percent, 59 percent of them voted for Trump and only 30 percent voted for Clinton. 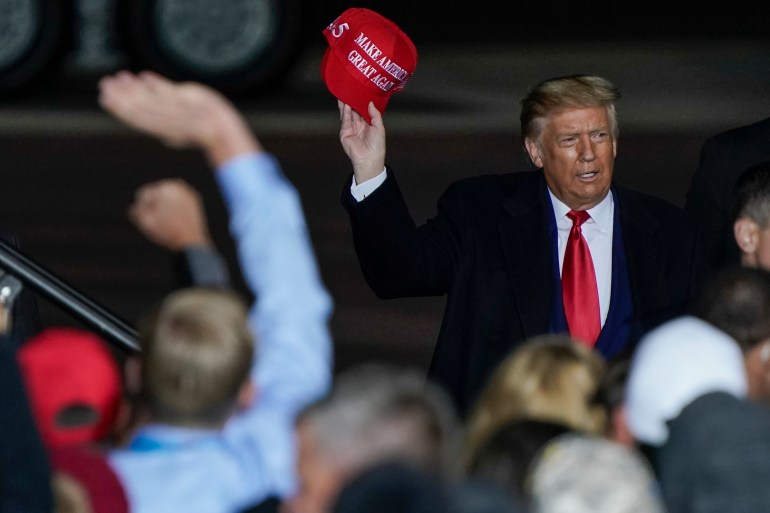 President Donald Trump throws a hat to the crowd after speaking at a campaign rally at the Central Wisconsin Airport on September 17, 2020, in Mosinee, Wisconsin [Morry Gash/AP Photo]The same combination of voters who handed Trump victory might be out of reach this time, according to Lee Miringoff, director of the Marist Institute for Public Opinion. Miringoff cited an analysis by NBC News and the Cook Political Report that found if 2016’s turnout was applied to 2020’s new demographics, Trump would lose Florida, Michigan, Pennsylvania and Wisconsin. As Trump attempts to energise his base, he is losing wider appeal. “He’s trying to run up the score of what is a shrinking group of people,” Miringoff said.

As Trump’s popularity wanes with white voters, they are turning to Biden. A Marquette Law School poll showed Biden five points up in Wisconsin while Marist had him leading by 10 points. Miringoff said Biden has a better favourability rating than Trump, attracting independents, white voters and voters over 65 – people who sided with Trump in 2016. Biden is winning among white men and especially white women.

Trump’s approval rating is 42 percent – low for any president trying to win re-election, he said. The problem for Trump is, this election is a referendum on his leadership, and his handling of COVID-19 is a top issue.

Protests followed the shooting of Jacob Blake by a policeman in Kenosha, Wisconsin in August. Although the vast majority of Black Lives Matter protests in America were peaceful, looting and property damage coincided with the protests in Kenosha, and self-identified militia member Kyle Rittenhouse was charged with first-degree intentional homicide in the shooting deaths of two protesters and the injury of a third.

Trump was able to flip Kenosha County from Obama in 2016, winning it by only 238 votes. Both candidates visited Kenosha after the unrest; Biden met with Blake’s family while Trump met with business owners who suffered damage and looting. Miringoff does not think Kenosha will have a large effect on the presidential race because it is not front and centre. “The last thing on people’s minds can be very telling in terms of how they’re voting.” 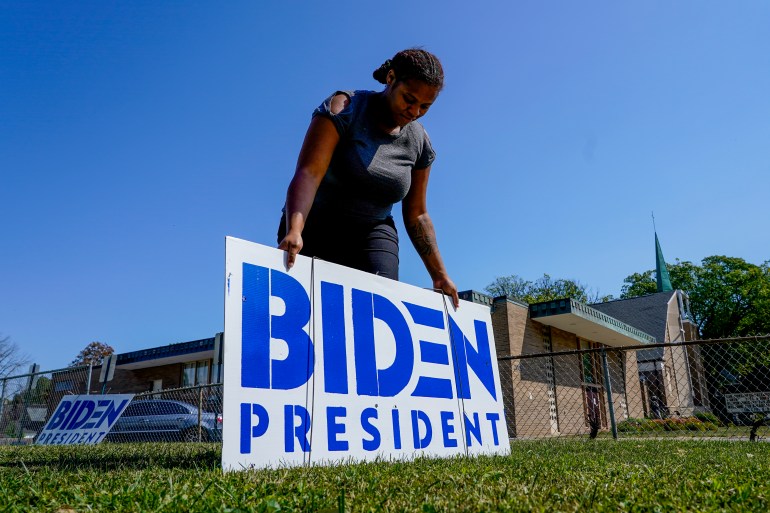 Raven Spence puts up a yard sign for Democratic presidential candidate former Vice President Joe Biden, September 3, 2020, in Kenosha, Wisconsin [File: Morry Gash/AP Photo]In the blue wall states of Michigan, Wisconsin and Pennsylvania that narrowly chose Trump in 2016, Wisconsin was initially seen as tougher for Biden to win back, but he appears to be gaining momentum. “The industrial Midwest is performing very differently than it did four years ago,” Miringoff said. “The idea of Joe Biden resurrecting the blue wall in the Midwest is a realistic possibility.”

Milwaukee voter Andrea Anthony, who is African American, was disenfranchised in both the 2016 election and the 2020 primary. In April, she requested an absentee ballot that did not arrive in time. In 2016, she planned to vote for Hillary Clinton but her ID had expired. She could not complete the steps to replace her ID because of her work schedule. “Whether I completed the steps or not, my voice was already taken away from me,” she said.

In early October, Minister Greg Lewis of Souls To The Polls, a group that registers Black voters, was registering a Milwaukee woman who recently moved. Wisconsin voters must live at their new address for 28 days to register at the polling site in that area; 27 days or less and they must register at the polling station at their previous address. She told him, “Forget it, I don’t even want to do this because it’s just too hard.”

Lewis said the laws fit into a history of voter suppression. “Back in the days of Jim Crow, they say, ‘Hey, man, how many gumballs are in this machine? If you could tell me, I’ll let you vote.’” Those rules have evolved into photo ID requirements, purging voter lists and inaccessible voting for minority populations. “It’s the same thing but now it’s more sophisticated.”

Miringoff thinks voter disenfranchisement will affect turnout. “It is a factor, I don’t know how large a factor it is.”

Anthony is optimistic – she sees people posting on social media that they will vote by any means necessary.

Souls To The Polls is just one group working in Wisconsin. VoteRiders is another helping voters get valid ID. “Don’t give up,” said Anita Johnson, the group’s coalition coordinator. She said Wisconsin voters can register to vote on election day and request an absentee ballot until October 30. “Do it immediately, do not wait for those two dates to creep up on you.” Every city library in Milwaukee has a dropbox for absentee ballots, she told Al Jazeera. Absentee ballots must be signed by a witness.

By mid-October, more than 1.4 million Wisconsin voters had requested absentee ballots – about 35 percent of the voting population, according to Molly Collins, advocacy director of ACLU Wisconsin. She said clerks cannot start processing ballots until 7am (12:00 GMT) on election day, so it could be on Wednesday, November 4 before the outcome of the race is known. This could mean a “red mirage” in Wisconsin as rural and in-person votes are counted first, more likely to go to Trump, followed later by urban and absentee ballots, more likely to go to Biden.

Anthony plans to vote in person this week, as early voting begins. She hopes sanitiser will be available and people will wear masks and keep their distance.

Vasquez temporarily moved to Houston, Texas for school but is still voting by mail in Milwaukee County. Her girlfriend is mailing her absentee ballot to Texas. She plans to send it back as soon as possible.