Brazil became the country with the second-highest coronavirus death toll in the world with 41,828 fatalities, surpassing the death toll of the United Kingdom and second only to the United States.

The UK economy has dwindled 25 percent over March and April as a result of the coronavirus lockdown, dwarfing previous downturns.

The World Health Organization (WHO) said the coronavirus pandemic puts women at "heightened risk" of dying in childbirth. More than 7.6 million people have now been confirmed to have the coronavirus and at least 424,000 have died, according to data from Johns Hopkins University.

Anthony Fauci, the top US infectious disease official, cautioned that the "blips" of rising coronavirus hospitalizations being reported by some states could get out of control if robust contact tracing regimes are not put in place.

About half a dozen US states are grappling with a rising number of coronavirus patients filling hospital beds, with Texas and North Carolina reporting on Friday their highest hospitalization rates since the pandemic began.

Fauci, in an interview with CNN, underscored that increased hospitalizations was a worrying trend and a sign that "maybe we need to slow down a little" on reopenings.

"When you start seeing more hospitalizations, that's a sure fire sign that you're in a situation where you're going in the wrong direction," he said.

INSIDE STORY | What's the psychological cost of the coronavirus (24:48)

Legislators labelled British Airways a "national disgrace" by legislators for its treatment of employees, adding to pressure on the airline as it juggles job cuts and new quarantine rules.

Britain's Transport Select Committee said that BA and its parent company IAG were trying to take advantage of the coronavirus crisis to cut 12,000 jobs and downgrade the terms and conditions of other employees.

"It is unacceptable that a company would seek to drive this level of change under the cover of a pandemic," Conservative legislator Huw Merriman, who chairs the committee, said in a report published on Saturday.

In response, a spokeswoman for the airline said: "We will do everything in our power to ensure that British Airways can survive and sustain the maximum number of jobs consistent with the new reality of a changed airline industry in a severely weakened global economy."

Chinese media said at least two of the infected people had visited the Xinfadi market. Authorities said all workers at the freshfood market were being tested for the virus. They also closed the Jingshen seafood market and ordered testing of food and environmental samples for all of Beijing's wholesale food markets.

Earlier, the city said it was delaying the planned reopening of school Monday for first to third graders because of the new cases. 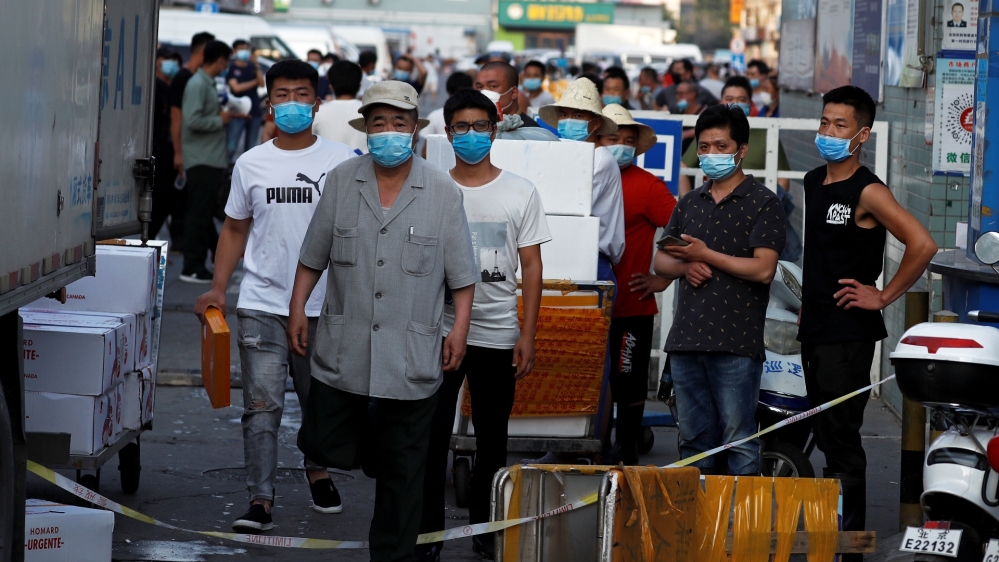 People are wearing face masks inside the Jingshen seafood market which has been closed for business after new coronavirus infections were detected in Beijing, China [Thomas Peter/ Reuters]

02:50 GMT - France to open borders to non-Schengen countries from July 1

France will gradually reopen its borders to countries outside the Schengen zone from July 1, the interior and foreign ministers said in a statement.

Foreign Minister Jean-Yves Le Drian and Interior Minister Christophe Castaner said France's reopening would be in harmony with the rest of the European Union, which has recommended that the bloc reopen to some countries in the Balkans from July 1. 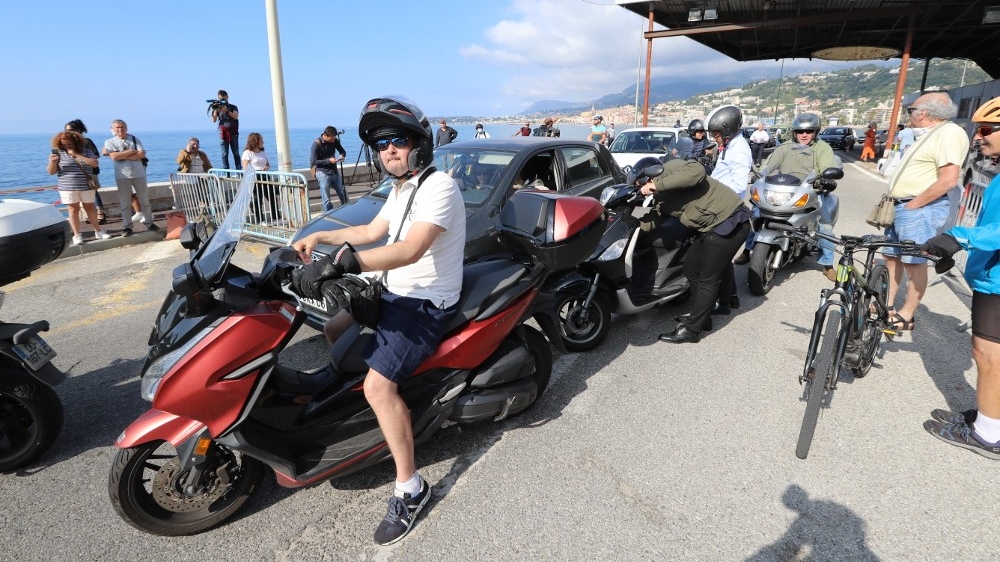 Travellers in cars and scooters cross the French-Italian border near Menton on June 3, 2020 after Italy reopened its frontiers with Europe [Valery Hache/ AFP]

"This opening will be gradual and will vary according to the health situation in each of the third countries, and in accordance with the arrangements that will have been agreed at European level by then," the ministers said.

Castaner and Le Drian confirmed that France would also lift all border restrictions with other Schengen countries from June 15.

A health ministry update said South Africa now has more than 61,9270 cases, or well over a quarter of the cases across the African continent, including 1,354 deaths.

Nearly two-thirds of South Africa's cases are in the Western Cape province centred on the city of Cape Town, where the World Health Organization's Africa chief has said the trend "seems to be similar to what was happening in Europe and in the US".

Claudia Sheinbaum, the mayor of Mexico City, said the Mexican capital will lift restrictions on car traffic and public transport next week, and allow 340,000 factory workers to get back on the job under strict sanitary conditions.

Sheinbaum said that street markets, malls, restaurants and churches could reopen a week later, but at reduced capacity.

The announcement came as the health ministry reported a record 5,222 new confirmed coronavirus infections, along with 504 new deaths. Total confirmed cases now number 139,196 and total deaths are at almost 16,450. Both are considered substantial undercounts due to very limited testing.

Separately, the federal government announced that starting on Monday, half of Mexico's 32 states can start limited reopenings of hotels and restaurants and broader reopenings of markets.

The states to reopen are those that have falling rates of coronavirus hospitalisations, lower rates of infection and acceptable ratios of available hospital beds.

President Andres Manuel Lopez Obrador has been eager to reactivate the economy, which has shed nearly one million formal jobs and is forecast to contract 8.8 percent this year.

"We don't think there are going to be new outbreaks," the president said on Friday. "We have to be careful that this doesn't happen, and open little by little with health measures, health protocols, and if we see a new outbreak somewhere, return to confinement - everything voluntarily."

In total, the Arab world's most populous country has registered 41,303 cases including 1,422 deaths, the health ministry said in a statement.

The country is planning to open its seaside resorts to international flights and foreign tourists on July 1. 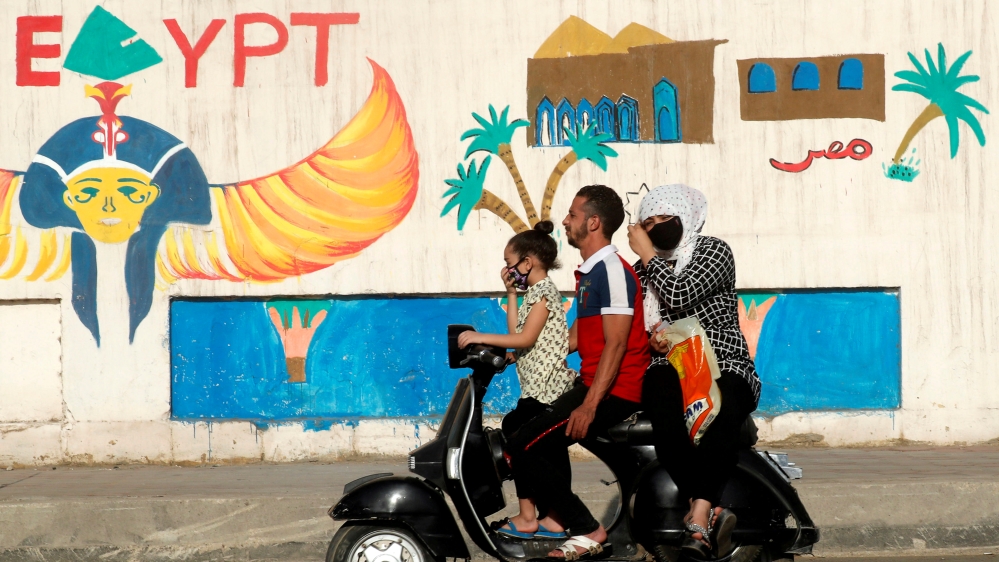 A man rides a motorcycle with his family next to a wall with pharaonic images in Cairo, Egypt on June 4, 2020 [Amr Abdallah Dalsh/ Reuters]

A Brazilian labour court ordered the closure of a chicken-processing plant owned by the world's largest meatpacker, JBS SA, in the southern state of Rio Grande do Sul for 14 days while the company's workforce is tested for COVID-19.

The court upheld an injunction sought by state health authorities ordering all workers to immediately leave the plant located in Trindade do Sul so that they can be in isolation for two weeks and be tested at the company's expense.

JBS did not have any immediate comment on the court order.

Requiring the wearing of masks in areas at the epicentre of the global coronavirus pandemic may have prevented tens of thousands of infections, a new study suggests.

Mask-wearing is even more important for preventing the virus's spread and the sometimes deadly COVID-19 illness it causes than social distancing and stay-at-home orders, researchers said, in the study published in PNAS: The Proceedings of the National Academy of Sciences of the United States of America.

Infection trends shifted dramatically when mask-wearing rules were implemented on April 6 in northern Italy and April 17 in New York City - at the time among the hardest-hit areas of the world by the health crisis - the study found.

"This protective measure alone significantly reduced the number of infections, that is, by over 78,000 in Italy from April 6 to May 9 and over 66,000 in New York City from April 17 to May 9," researchers calculated.

Somalia's al-Shabab group said they had set up a COVID-19 treatment centre in the country, and said the disease posed a grave threat, citing international health authorities.

"Al-Shabab's corona[virus] prevention and treatment committee has opened a COVID-19 centre," the group said in a broadcast on their radio Andalus, adding the centre had been set up in Jilib, about 380 kilometres (236 miles) south of the capital, Mogadishu.

For more than a decade, the group has been fighting to topple the Horn of Africa's Western-backed central government and establish its own government based on its own interpretation of Islamic law.

Brazil's COVID-19 death toll has overtaken that of the United Kingdom to become the second-highest in the world after the United States, according to numbers released by the Brazilian Health Ministry.

Botswana has brought back a strict coronavirus lockdown in its capital city and surrounding areas after recording 12 new cases of the virus - four imported cases at its borders and eight at a private hospital in Gaborone.

The southern African nation ended a 48-day national coronavirus lockdown late last month, allowing businesses and schools to reopen under controls, but its borders are still closed apart from for returning citizens and imports of essential goods.

"From midnight today, the greater Gaborone area will revert to extreme social distancing until further notice, where only essential services will be allowed to operate," he said in a televised announcement.

The new cases bring Botswana's cumulative cases to 60. Prior to Friday's cases, Botswana only had one active case of the coronavirus. It has recorded only one coronavirus death.

You can find all the developments from yesterday, June 12, here.