"Because Of Caste": Woman Panchayat Leader Made To Sit On Floor For Meeting 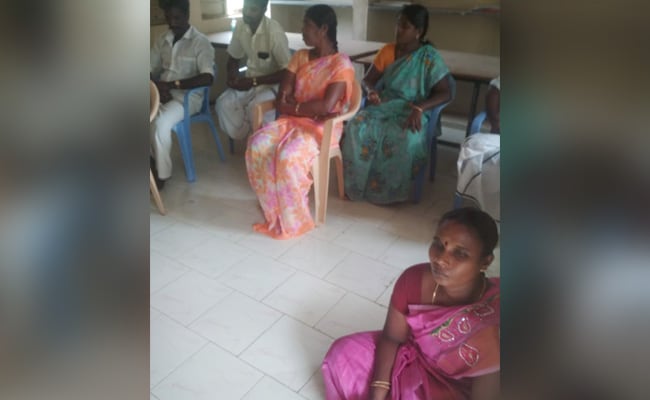 The woman, an elected panchayat leader said she was being discriminated against

A photograph showing an elected woman panchayat leader sitting on the floor during a meeting she ought to preside over - while others sit on chairs - has sparked outrage in Tamil Nadu and exposed the deeply entrenched discriminative practices.

The District Collector in Tamil Nadu's Cuddalore, where the incident took place, has suspended the panchayat's secretary and ordered a probe after the photograph emerged on social media.

The woman seen in the photograph of the President of the Therku Thittai village panchayat and belongs to the Adi Dravida community, a Scheduled Caste. She was elected to her post - a reserved seat - last year.

"Because of my caste the Vice President does not let me preside over meeting. He did not even let me hoist the flag. He made his father do it. Although I was cooperating with the upper castes all these months, it is going overboard now," she said.

Speaking to NDTV, Chandra Sekhar Sakhamuri, the District Collector, said: "We are investigating the case and will have clarity in a few hours. The secretary was suspended because she failed to inform authorities about this alleged discrimination."

Despite laws banning untouchability and caste-based discrimination, these are still practiced across Tamil Nadu, with restrictions on cooking utensils and crockery ("upper castes" refuse to eat food prepared by the "lower castes" or use plates and glasses they use) and dressing among others.

In many villages there are also designated areas for Scheduled Castes to live and they are not allowed wear footwear when they pass through areas where the "upper castes" live. In the past many have been caught on camera carrying slippers in their hands in those areas.

Until a decade ago three reserved village panchayats - Pappapatti, Keeripatti and Nattarmangalam in Madurai district - had no Scheduled Caste candidates contesting out of fear of the dominant castes' backlash.

Those who dared to contest and win were forced to resign, making a mockery of the electoral reservation system to politically empower men and women from oppressed communities.
Women from these communities continue to be sexually abused.

In Tuticorin district there have even been reports of dogs adopted by members of the oppressed communities being forced to stay away from those adopted by the "upper castes".

There are also separate cremation grounds.

The Scheduled Caste communities are politically divided and are not strong vote bank. The Dravidian political parties in the state are unwilling to crackdown on these atrocities as the "upper castes" are, by contrast, a strong vote bank.

India, China inch closer to disengagement at Gogra-Hot Springs, no headway in Depsang

Shivraj Singh Chouhan to visit Delhi on August 4, appointments in PSUs on cards