Bangladesh defends use of fences after deadly Rohingya camp fire

Bangladesh has defended the use of barbed wire fences around vast camps holding almost a million Rohingya refugees, after a major fire left at least 15 people dead and nearly 45,000 homeless.

The fire, which gutted some 10,000 refugee shanties, was the deadliest since more than 740,000 Rohingya fled a military crackdown in Myanmar in 2017 that United Nations investigators concluded was executed with “genocidal intent”.

The UN, aid groups and Rohingya leaders said the fences erected by the military trapped many people during the fire and hampered rescue work during Monday’s 12-hour blaze in the maze of bamboo and tarpaulin huts in the world’s biggest refugee settlement. 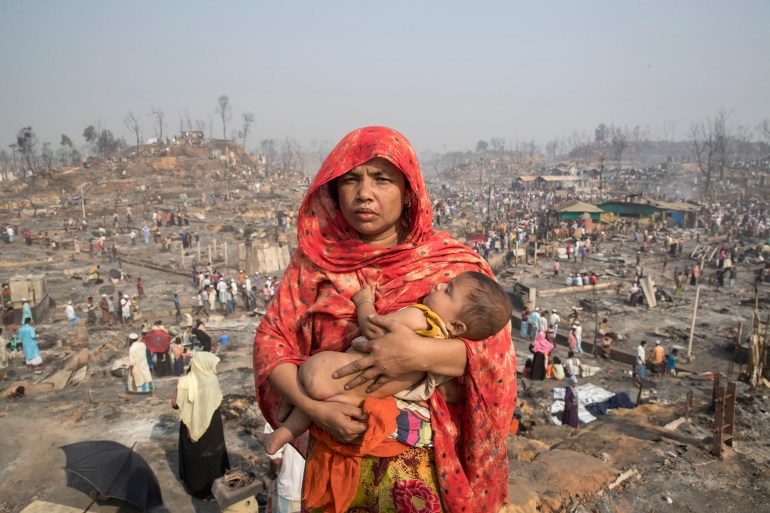 A Rohingya mother holds her baby after a huge fire swept through their camp in Bangladesh [Yousuf Tushar/LightRocket via Getty Images]International humanitarian agencies have called for the removal of the fences.

“Rescue efforts proved to be challenging as a result of the presence of perimeter fencing,” a joint statement from the UN, local and international aid agencies said.

“In some instances, refugees themselves cut through the fence to escape the fire,” it said.

Bangladesh refugee commissioner Shah Rezwan Hayat defended the fences, which were built in recent months amid a worsening law and order situation in the vast settlements.

“I don’t believe these fences have hampered rescue efforts. There were enough roads in the camps and the hundreds of our officials, policemen and volunteers were there to rescue them,” he told AFP news agency.

He said the fences were not built inside the camps to act as barriers between blocks of shanties.

“The barbed wire fences were erected on the outer boundary of the camps to ensure the safety and security of the Rohingya people. If the fencing acted as a barrier, how could dozens of fire fighting vehicles, police vans enter the camps within 20 minutes after the fire?” he said. 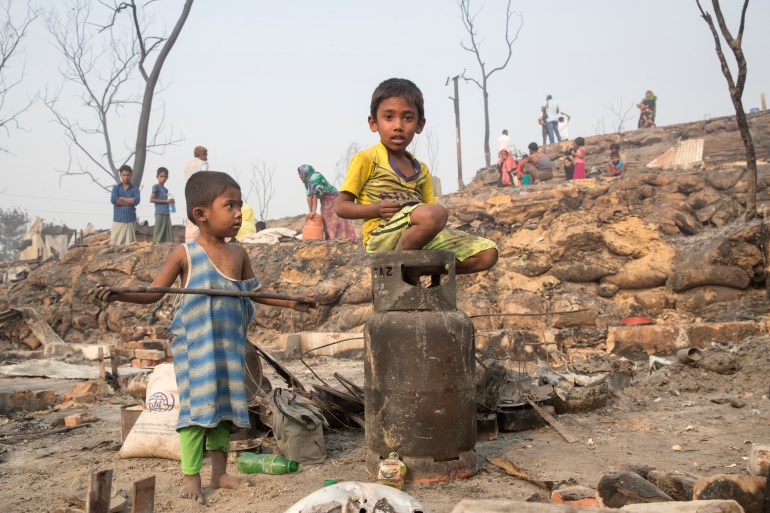 Rohingya children amid charred remains at the refugee camp in southern Bangladesh [Yousuf Tushar/LightRocket via Getty Images]Deputy Bangladesh government official in charge of the refugees, Mohammad Shamsud Douza, also said the fencing was not a major issue.

“It spread so quickly that some people who could not come out instantly died,” he said. “It was not the barbed wire fencing that prevented them from escaping.”

But Rohingya refugees vented their anger over the fences to reporters and on social media, saying some were injured as they were trying to flee the fire.

Hayat also rejected the UN’s claim that some 400 people were still missing after the fire, saying most refugees had taken shelter with relatives in neighbouring camps, in schools and refugee transit centres.

“We are on the ground. So far we don’t think anybody is missing,” he said, adding the authorities and the UN agencies were now building tents and temporary shelters and most refugees have started returning. 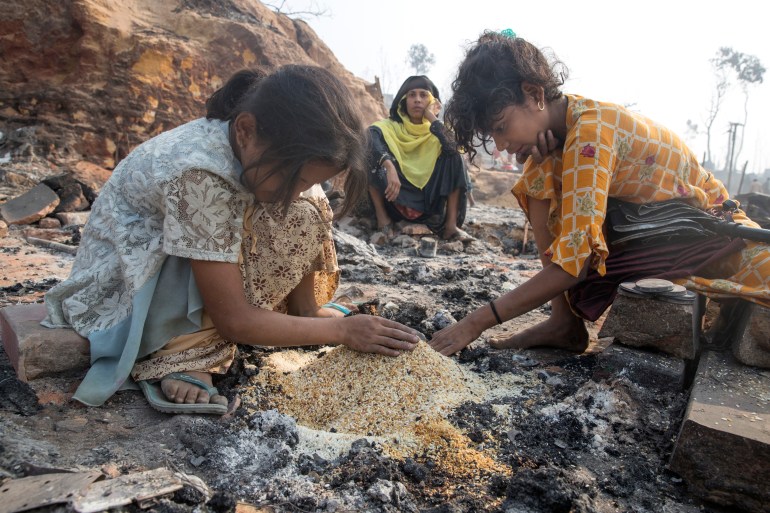 The fire destroyed thousands of homes and killed at least 15 people in the worst blaze to hit the sprawling settlement since 2017 [Yousuf Tushar/LightRocket via Getty Images]A police spokesman said the local police station did not receive any reports of missing Rohingya and that officers were questioning eight people over the fire.

Hayat said preliminary findings suggested the fire originated from a stove in a shelter and then quickly spread due to strong wind and cooking gas cylinders.

A full investigation was ongoing, he said. 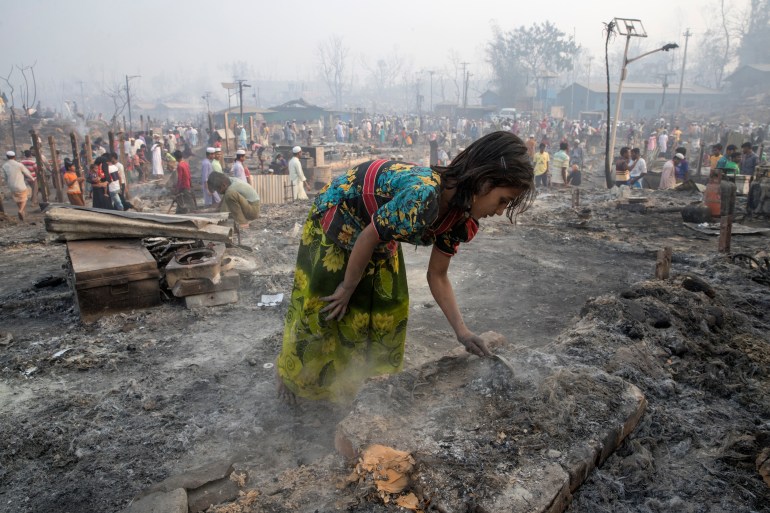 “We must ensure that any children who were separated from their families during the evacuation are reunited quickly.”

She did not provide an estimate of how many children had been left on their own.

The UN refugee agency, UNHCR, also said children were looking for their parents, in another trauma for families.

“This is a very difficult situation and our heart goes out to the thousands of refugees who have yet met another disaster,” UNHCR official Ita Schuette said in a video message posted on Twitter from Cox’s Bazar.

Citing overcrowding in the camps, Bangladesh has been trying to move 100,000 Rohingya to a remote Bay of Bengal island.

Aid groups say the flood-prone, low-lying Bhasan Char island, which only emerged from the sea about 20 years ago, risks being overwhelmed by storms and refugees should not be housed there.

Despite that, and the reluctance of many Rohingya to move, Bangladesh has transferred more than 13,000 refugees to the island since December. 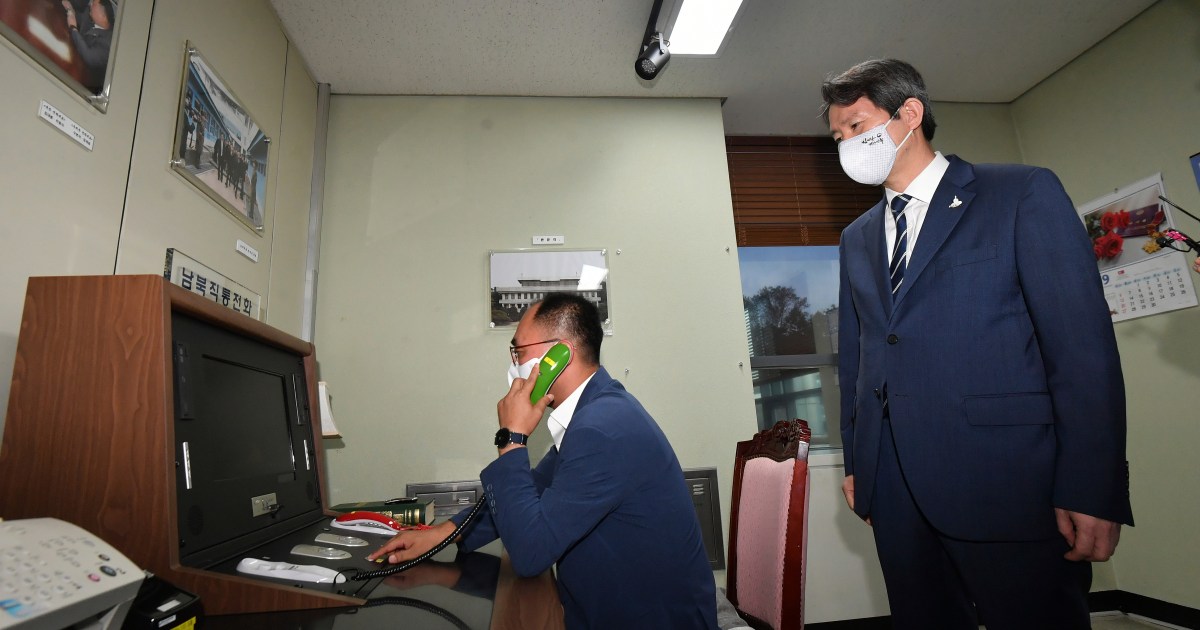 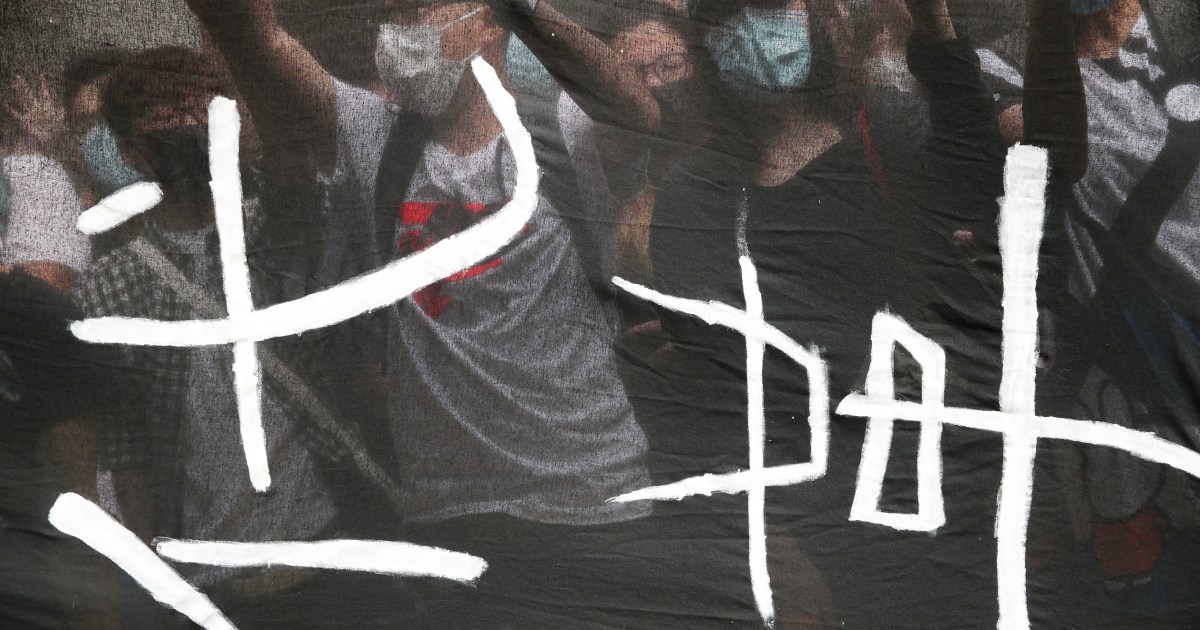