'Back to where we were': Beijing fears second wave of coronavirus

Beijing, China - Nelson Quan had no idea he had been locked into his compound in the Yuquan district of Beijing until he arrived at the front gate and saw the barricade.

Four days earlier, on June 11, Beijing had reported its first COVID-19 case in almost two months. Now, Quan's community and at least 27 others are forced to stay at home while they await the results of their nucleic acid virus tests. No one is allowed in, or out.

"Two months of things loosening up, and life feeling like it's going to be normal, and all of a sudden we're back to where we were in February," Quan said in a phone call.

Quan lives just steps from Yuquan East Market, which gets its produce from Xinfadi, the enormous wholesale market identified as the origin of the latest outbreak. Located in the southwestern part of the city, Xinfadi supplies more than 80 percent of the city's fruits and vegetables, and tens of thousands of people are estimated to go there every day.

Beijing has reported 137 new cases since the cluster was identified, not including three suspected and six asymptomatic cases. Neighbouring provinces Hebei, Liaoning, Sichuan and Zhejiang have also reported new cases linked to travellers arriving from Beijing.

China's Vice Premier Sun Chunlan has called for decisive action, warning that the risk of the virus spreading again is "very high". Senior city government official Xu Ying put Beijing in "wartime mode" to contain the virus, invoking fears of another sweeping lockdown across the city with accompanying restrictions on movement.

In the communities placed under "closed management", it may indeed feel like the beginning of another period of deprivation, but the approach the authorities have taken so far is quite the opposite of a "sweeping lockdown", said Holly Snape, an expert on Chinese policy at the University of Glasgow's School of Social and Political Sciences.

She noted that the communities under lockdown are only a small proportion of the 7,120 across the capital, which is home to more than 20 million people. 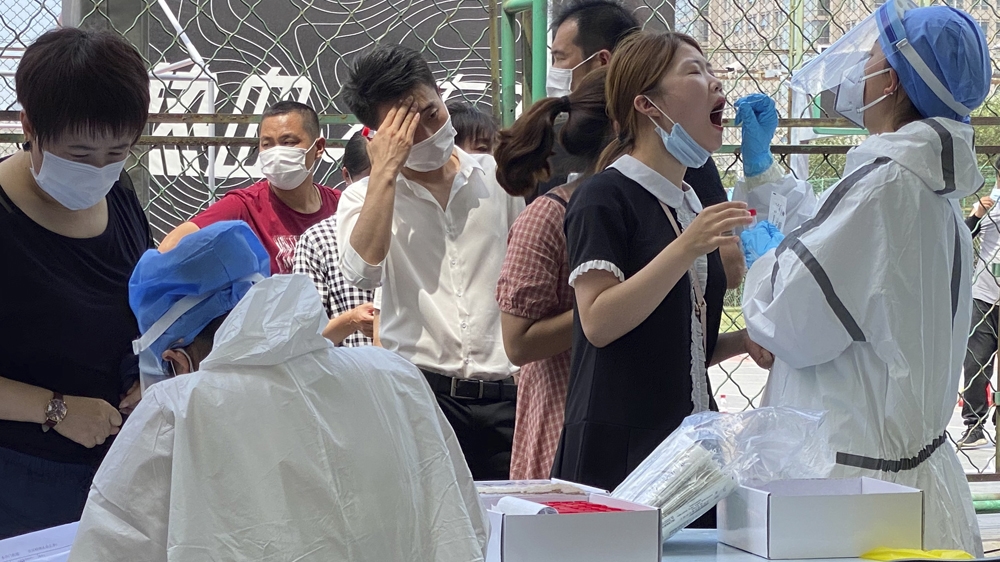 "What they're doing is essentially a process of rapidly pinpointing, on a massive scale, points of potential risk," she said. "It combines swift moves to find the origin, cut off transmission and contain the spread - with tracking down, tracing and testing."

According to government officials, 100,000 "epidemic control workers" have been deployed to the affected areas to organise testing where necessary, take temperatures, make banners to caution residents about hygiene practices, take registration details at the door to apartment compounds that remain open, and more.

The government has also called on companies and communities across the capital to survey employees and residents regarding any travel to the affected neighbourhoods in recent weeks. Individuals designated high-risk will be quarantined and tested immediately.

Among additional safety measures, the city's schools have again closed, only weeks after students returned to campuses. Bars, indoor sports and entertainment venues will also shut, according to an announcement earlier on Wednesday; and more than 60 percent of commercial flights in and out of the city have been cancelled.

However, for the vast majority of Beijing residents, "wartime mode" is not currently about curbing movement, but about getting people to recognise the risks and adopt a more cautious approach, says Snape.

"I think that this is more about putting people on their guard and reminding them to perform their own protective behaviours, prompting everyone to do their bit," she said. 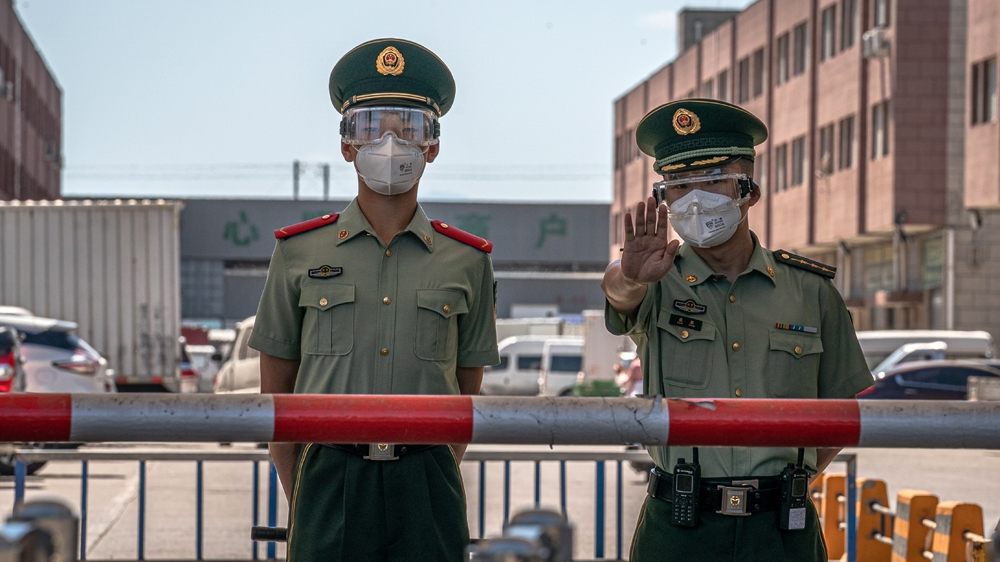 Over the past few weeks, much of the city had relaxed as zero new cases were reported for 55 consecutive days, and the government all but declared victory over the outbreak.

On June 6, the city's emergency response had been lowered to Level 3; down from Level 1 (the highest) in the earlier months of the year. Enforcement of restrictions had become more sporadic, and in some cases had been dropped entirely.

After the recent outbreak, Beijing has returned to Level 2. Although residents in most parts of the city are still free to move around, restrictions are back in full force: temperature checks at the entrance of shopping centres, apartment compounds, office buildings, retail shops as well as other measures including stringent checking of the "jiankangbao", a QR-scanned code that confirms that a person has not been flagged as high-risk.

Many Beijing residents are bracing for a return to the "lockdown" conditions of earlier this year. Although the city never officially required people to stay indoors, even at the height of the outbreak, most people opted to self-quarantine. With all businesses closed at the time, there was little reason to leave home anyway.

Restaurant and small business owners received the news of this new outbreak "like a punch in the gut," said Hsu Li, who owns a stake in a local restaurant.

While temporary restaurant closures during the first wave of cases were tough, people understood they needed to buckle down and deal with it, Li said. Now the prospect of a second wave has arrived just as restaurants were on the verge of recovering.

"Everyone was pumped to reopen again, getting staff hired and trained, so then hearing the news that our supply chains have been cut off from these markets was a blow - it's more the pent-up optimism and expectation getting crushed suddenly," Li said of his disappointment.

For some restaurants this is more than a punch to the gut - it is a "knockout punch", he said. "The second wave basically means that a lot of operators will have to throw in the towel." Li's restaurant has survived due to a generous landlord who waived the rent for four months, but many have been less fortunate, he said.

For families whose children are now back at home following the closures of local schools, the new cases mean that a return to normality could be months away.

"The current situation is not very promising," said Millie Yang, whose 11-year-old son had finally returned to school in early June after months of staying almost exclusively indoors. He had struggled with the isolation, and was relieved to see his friends again, she said. Now he is back home, taking classes online.

The similarities between Beijing's new cases and how the outbreak unfolded in Wuhan has left Yang feeling "a bit panicked", she said. "There are many uncertainties."

Adapting to the virus

Government epidemiological expert Zeng Guang told the state-run Health Times newspaper: "Beijing will not turn into a second Wuhan, spreading the virus to many cities all over the country and requiring a national lockdown."

Other government experts have said the outbreak in the capital differs from Wuhan because the genome sequencing of virus samples collected from Xinfadi suggest the strain of the virus is from Europe, although some have questioned whether or not the virus can be identified by geographically specific variation.

Zhang Yuxi, chairman of Xinfadi Market, announced that positive samples had been collected from a cutting board that had been exposed to imported salmon. However, government officials noted that environmental samples taken from elsewhere in the market had also tested positive. 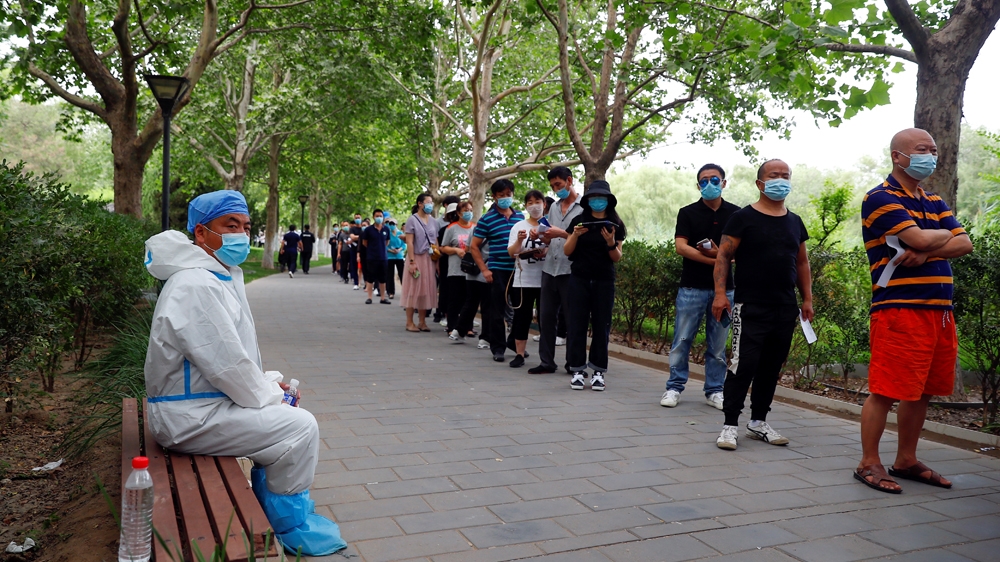 People queue up in a Beijing park to be tested for coronavirus. Authorities have put the capital on a "war footing" after a series of cases emerged around Beijing's wholesale market [Thomas Peter/Reuters]

Other experts have noted that even if the cutting board did include samples of this particular strain, there is no clear evidence that the cutting board was not exposed to the virus prior to being used to cut the fish. In the meantime, imports of salmon have been suspended.

Containing the new outbreak will be a "mammoth task", Snape said, but is one the government is tackling rigorously with an eye towards keeping business and life as "normal" as possible.

"I think this approach recognises that the virus is not going away anytime soon," Snape said. "We don't know yet how it will develop, and we have to learn to live with and adapt to deal with it in a way that enables life to continue while minimising the impact."