'Average' hurricane season may need to be redefined, forecasters say

Feb. 25 -- There are fewer than 100 days until the 2021 Atlantic basin hurricane season begins and you may be asking yourself, "Wait, didn't the last season just end?"

While 2020 didn't spawn the longest-lasting period of tropical activity on record for the Atlantic basin, although it was close, it was most certainly the most active season overall. With 30 total named storms, including three that developed before the official start of hurricane season on June 1, last season shattered the record for the most named tropical cyclones in a single year, breaking the previous record set in 2005.

While that could be an outlier in historical data, recently published data suggests that what is considered a "normal" amount of storm activity in the Atlantic basin may need redefining.

Brian McNoldy, a senior research associate with the University of Miami, published data on Twitter and said "the bar has been raised" for what can be expected in the new normal. Not only is the number of named storms rising, the annual average numbers of hurricanes and major hurricanes, considered Category 3 strength or stronger, are also on the rise. 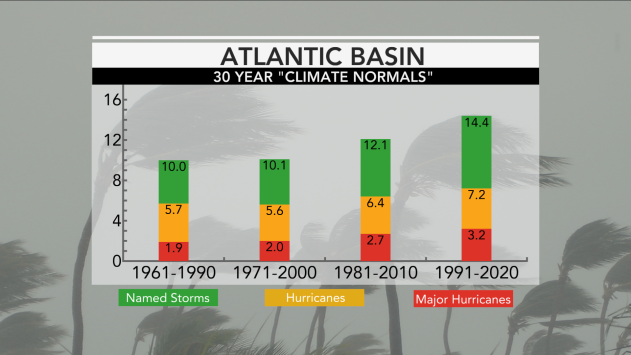 The three-decade span to determine a climate normal is established by the National Oceanic and Atmospheric Administration and is re-established every 10 years. According to AccuWeather Senior Meteorologist Jesse Ferrell, the United States adopted 30-year time periods to follow the procedure set by the World Meteorological Organization from 1901-1930.

At the conclusion of 2020, a new 30-year window from was 1991-2020 was established to analyze the recent "climate normal." Previously, the time frame of 1981-2010 had been used. The climate normal is helpful for meteorologists and scientists to determine what should constitute a regular hurricane season and what would be considered a hyperactive season.

Compared to the initial time frame (1961-1990), those numbers hardly budged in the 1971-2000 window. However, those figures have since jumped astronomically.

But in an email to AccuWeather, McNoldy didn't sound particularly surprised by the findings, largely because of the historically notable seasons included in the span, including 2020, 2005 and 1995. 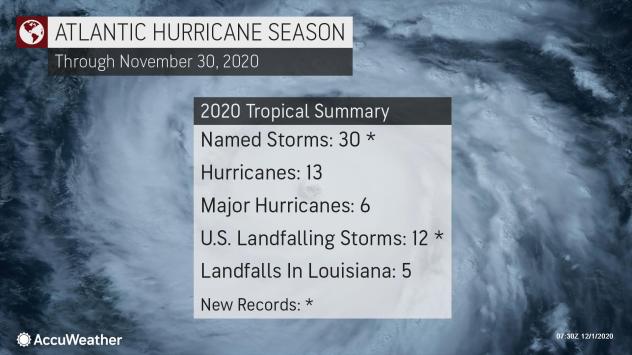 "If NOAA continues to use a 30-year normal as they've always done, then this is just the mental adjustment we make every decade," McNoldy said. "When the baseline goes up, it means that it takes more activity to be above that new normal."

McNoldy noted that 1995 will drop out of the mix in the next data set, "but who knows what will take its place?"

Kottlowski, who has been analyzing tropical patterns for decades, added that this climbing trend has been ongoing since the mid-1990s.

"We have seen the number of named tropical storms and hurricanes rise since 1995 when Atlantic sea surface temperatures have been averaging warmer than normal in key areas of the Atlantic where tropical development is most favored," he said.

Rising water temperature may also not be the only factor aiding the increased number of named storms. The improvement of satellite technology has helped recognize more storms than ever before, including some that are short-lived and in areas that would have previously been a blind spot.

The above animation shows a visible satellite and infrared view of Hurricane Iota approaching and, ultimately, making landfall in Nicaragua last November.

"This has probably led to an increase of one to two named storms on average during the past 30 years."

Despite the increase in quantity of storms, analysis following the 2020 season showed that the Accumulated Cyclone Energy index doesn't indicate that the recently busy hurricane seasons are necessarily more intense.

ACE calculates the intensity of a storm, and while an increased amount of storms will boost a season's total ACE, the increase in detectable short-lived and weaker storms has actually dragged season totals downward even as the ACE for individual storms continues getting higher and higher.

Based on ACE, Klotzbach said that if NOAA were to switch to the 30-year range for its season hurricane outlook, it would "dramatically shift the way hurricane seasons are classified," especially for determining what constitutes an above-average or hyperactive season. 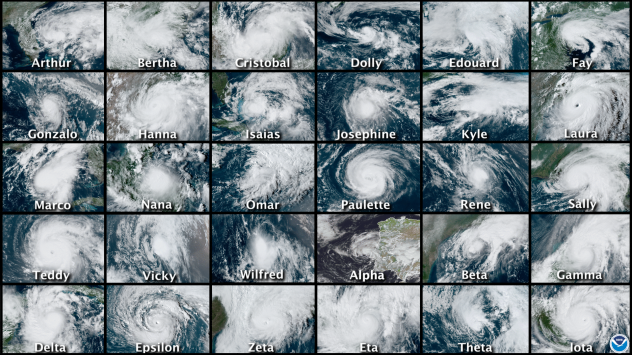 Above is a composite photo depicting satellite images of all 30 named storms during the 2020 season.

These latest figures shift the standards that experts use to determine whether a season meets the hyperactive threshold.

On top of those definitional qualifications, McNoldy reiterated the critical role that technology plays in helping researchers and the public better understand the punch that these storms pack.

"The definition of a tropical storm or hurricane has not evolved, so it's not a shift in 'qualifications.' But as technology improves, we are bound to catch more subtleties in a storm's lifetime," McNoldy said. "And, the jump in intensity from a tropical depression to a named storm is just 30-35 knots or 60-65 knots for a hurricane or 95-100 knots for a major hurricane.

"One click makes a big difference in the counts. So not only is a 30-year normal meant to be representative of the modern climate, but also of modern technology."