A medical examiner has ruled the death of Rayshard Brooks, a Black man killed by a white police officer in Atlanta, a homicide caused by gunshot wounds to the back.

Brooks' death reignited protests in Atlanta after days of worldwide demonstrations against racism and police brutality prompted by the death of George Floyd, another Black American, in Minneapolis police custody on May 25.

An autopsy conducted on Sunday showed Brooks, 27, died from blood loss and organ injuries caused by two gunshot wounds, an investigator for the Fulton County Medical Examiner's office said in a statement.

The manner of his death was homicide, it said.

Brooks' fatal encounter with police came after an employee of a Wendy's restaurant in Atlanta phoned authorities to say someone had fallen asleep in his car in the restaurant's drive-through lane.

Caught on an officer's body camera and a surveillance camera, the encounter seemed friendly at first as Brooks cooperated with a sobriety test and talked about his daughter's birthday.

"I watched the interaction with Mr Brooks, and it broke my heart," Atlanta Mayor Keisha Lance Bottoms said on CNN. "This was not confrontational. This was a guy that you were rooting for."

But when an officer moved to arrest him, Brooks struggled with him and another officer at the scene before breaking free and running across the car park with what appears to be a police Taser in his hand, a bystander's video showed.

A video from the restaurant's cameras shows Brooks turning as he runs and possibly aiming the Taser at the pursuing officers before one of them fires his weapon and Brooks falls.

Atlanta's police chief, Erika Shields, resigned over the shooting. The officer suspected of killing Brooks was fired, and the other officer involved in the incident, also white, was put on administrative leave.

Bottoms said she did not believe the shooting was a justified use of deadly force. 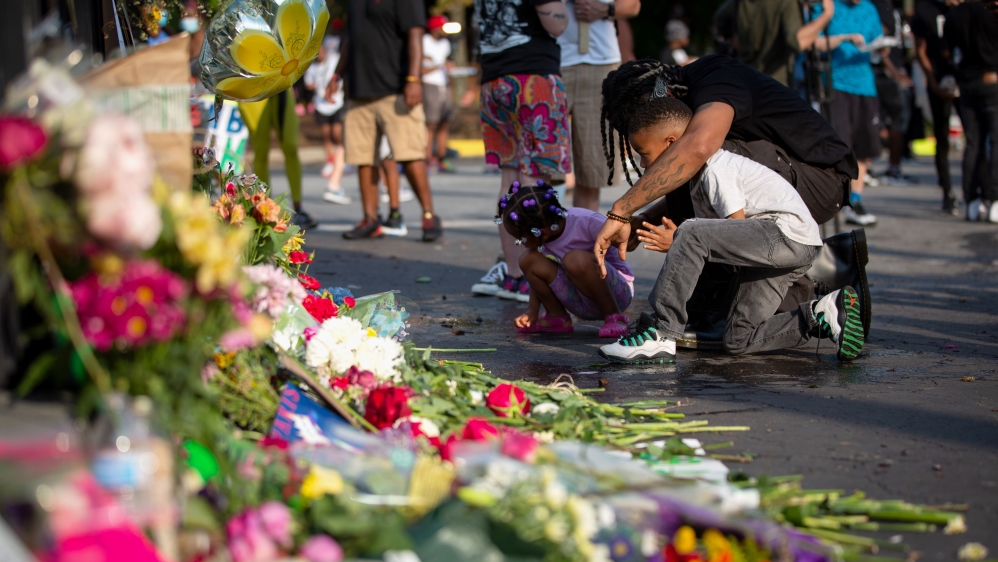 People mourn at the site of where Rayshard Brooks, 27, was shot and killed by police in a struggle following a field sobriety test in Atlanta, Georgia [Dustin Chambers/AFP]

"[The victim] did not seem to present any kind of threat to anyone, and so the fact that it would escalate to his death just seems unreasonable," Howard said.

A lawyer acting for the dead man's family said disproportionate force was used in the confrontation.

"In Georgia, a Taser is not a deadly weapon - that's the law," L Chris Stewart told reporters. "Support came, in I think two minutes. He would have been boxed in and trapped. Why did you have to kill him?

"[The officer] had other options than shooting a man in the back."

Brooks had four children, Stewart added, and had celebrated the birthday of his eight-year-old daughter earlier on Friday.

His death was the 48th shooting involving an officer that the Georgia Bureau of Investigation has been asked to investigate this year, according to the Atlanta Journal-Constitution. Fifteen of those incidents were fatal.

As demonstrators in Atlanta took to the streets and chanted for the officers in Brooks' case to be criminally charged - at one point late on Saturday blocking traffic on a nearby interstate highway - the Wendy's restaurant went up in flames.

On Sunday, police offered a $10,000 reward and published photos of what appeared to be a masked white woman being sought in connection with the case.

Police said they were seeking those responsible for the blaze, including a woman who was "attempting to hide her identity".

The department posted photos on social media of what looked to be a young white woman wearing a black baseball cap and face mask, and a video clip filmed by a protester that appeared to show a woman encouraging the flames.

"Look at the white girl trying to burn down the Wendy's," the man recording the video can be heard saying. "This wasn't us."