Astronauts reach ISS in half the time after new speedy approach

A trio of astronauts have reached the International Space Station in just three hours by using a new fast-track manoeuvre.

NASA's Kate Rubins, alongside Roscosmos cosmonauts Sergey Ryzhikov and Sergey Kud-Sverchko, blasted off from the Baikonur facility in Kazakhstan early on Wednesday morning.

The launch used a two-orbit, three hour approach for the first time.

Previously, it took twice as long to reach the station.

The trio successfully docked with the ISS at 4.48am ET, tweeted NASA, after launching at 1.45am.

They will join station commander Chris Cassady, as well as cosmonauts Anatoly Ivanishin and Ivan Vagner, who have been aboard since April and are scheduled to return to Earth next week.

At a news conference before launch, Ms Rubins said the crew had spent weeks in quarantine at the Star City training facility outside Moscow, and then at Baikonur, to ensure they did not have coronavirus.

They will spend six months at the space station, some 253 miles (408km) above Earth. 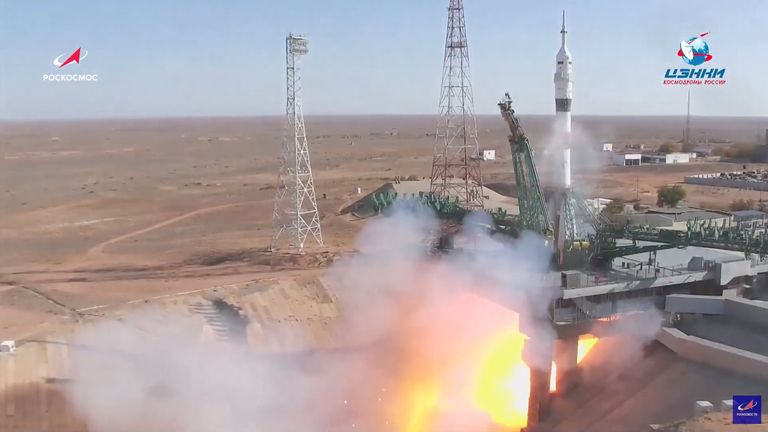 Image: They launched on a Soyuz MS-17 spacecraft. Pic: Roscosmos/Reuters

The mission follows the launch earlier in October of a special food delivery to the ISS, including meats, cheeses, oranges, pecans and chocolate-covered cranberries - just in time for the American holiday of Thanksgiving.

The Cygnus capsule contained more fresh food than usual, as the number of people at the space station will increase from six to seven with SpaceX's second astronaut launch at the end of the month.

It also included pressurised air tanks to help offset a leak at the space station; a new $23m (£18m) titanium toilet designed for women, and a VR-camera which will provide cinematic shots of spacewalks and other outdoor scenes from space.