AstraZeneca said its COVID-19 vaccine was 76 percent effective at preventing symptomatic illness in a new analysis of its key trial in the United States – slightly lower than the level announced earlier this week in a report that was criticised for using outdated information.

US health officials had publicly rebuked the drugmaker for not using the most up-to-date information when it published an interim analysis on Monday that said the vaccine was 79 percent effective.

“The primary analysis is consistent with our previously released interim analysis, and confirms that our COVID-19 vaccine is highly effective in adults,” Mene Pangalos, the executive vice president of BioPharmaceuticals R&D at AstraZeneca said in a statement.

AstraZeneca said it plans to seek US emergency-use authorisation for the vaccine in the coming weeks and the latest data had been presented to the independent trial oversight committee, the Data Safety Monitoring Board. 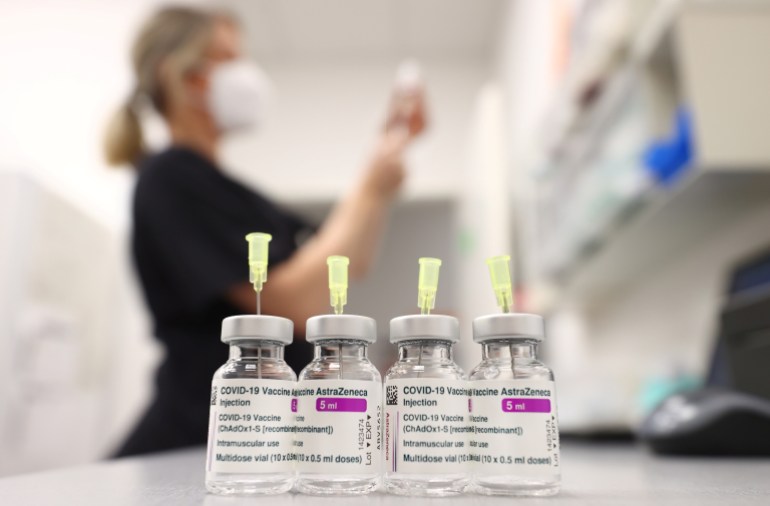 European countries have resumed vaccinations with AstraZeneca after a suspension following the emergence of a tiny number of blood clot cases [Kai Pfaffenbach/Reuters]AstraZeneca reiterated on Thursday that the shot, developed with Oxford University, was 100 percent effective against severe or critical forms of the disease. It also said the vaccine showed 85 percent efficacy in adults 65 years and older.

“A lot of us were waiting for this large, well-constructed and reported Phase III study,” said Paul Griffin, a professor at the University of Queensland.

“This appears to be a very effective vaccine with no safety concerns. Hopefully, this should now give people the confidence that this vaccine is the right one to continue to use moving forward,” he said, adding that he and his parents have taken the vaccine.

The updated 76 percent efficacy rate compares with rates of about 95 percent for vaccines developed by Pfizer-BioNTech and Moderna, which not only require more careful storage and handling but are also more expensive.

The AstraZeneca vaccine is cheaper and easier to handle and has been given to millions of people in the United Kingdom. More than 70 countries have already granted the drug conditional marketing or emergency use authorisation, and it is the backbone of the World Health Organization’s COVAX facility, which aims to get much-needed vaccines to the less wealthy parts of the world.

The highly unusual rebuke from US health authorities had marked a fresh setback for the vaccine after more than a dozen countries – primarily in the European Union – temporarily suspended it after a tiny number of blood clot cases emerged.

The EU’s drug regulator said last week the vaccine was clearly safe and the benefits far outweighed the risks.