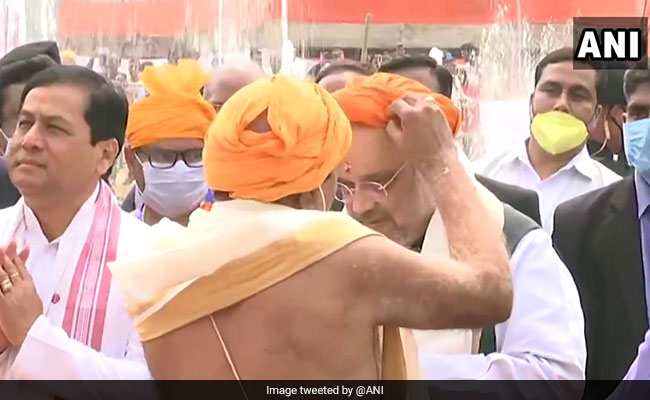 Union Home minister Amit Shah today continued to play the "development" theme in Assam and for India's northeast, promising to make them a developmental hub. He is on one of his frequent visits to the state in the run up to the state Assembly polls. Speaking in Nagaon district of the state, he sought to, once again, draw a contrast between the earlier scenario of violence and unrest in the region to the one now of hope and economic growth.

Assam goes to polls in April-May, along with several other states like West Bengal and Tamil Nadu.

The ruling BJP government is looking to retain power with the party devoting huge resources on the state in recent weeks. Prime Minister Narendra Modi himself has visited the state multiple times beside the many trips made Mr Shah himself.

During all their appearances in Assam, the duo has mostly spoken on the theme of development.

"Assam is on the path of development...This is the first phase and after this ceremony Assam can only march ahead," Mr Shah said today at a temple ceremony in Puranigudam, Nagaon.

"The state was earlier known for agitation, arms, and violence. Now it will be known for development, investment, education, and tourism," he said.

The Union Home Minister said that under Prime Minister Narendra Modi's leadership, "new areas of development" had opened up in Assam.

"We have to make Assam flood-free and infiltration-free, besides violence-free. Northeast India will emerge as the highest contributor to the GDP of India," Shah told media persons.

Addressing a gathering at Batadrava Than, the birthplace of revered Assam social reformer Srimanta Sankardeva, he said the Centre had already begun work to transform the northeast region into a growth engine for India.

"The Prime Minister has visited the region 35 times in the past five years. The Congress leaders and ministers visited Assam only during the election time. A satellite-based survey has been conducted and plans are afoot to permanently resolve the flood problem and to undertake many projects to develop tourism and other infrastructures," Shah said.