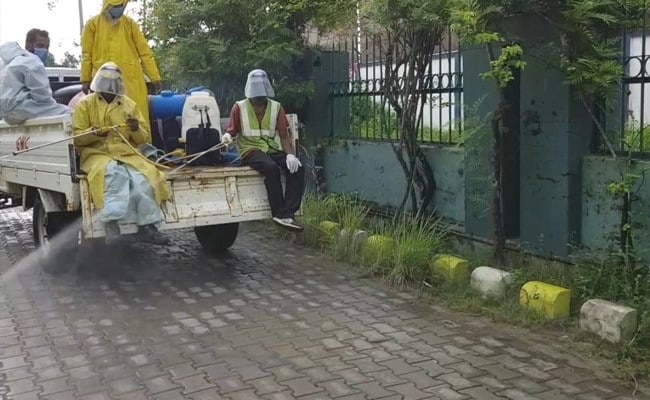 A massive surge in infections has been reported in Guwahati since June 15.

A "first-of-its-kind" door-to-door coronavirus testing drive has been launched in Assam's Guwahati after a massive surge of over one thousand new infections was reported by the city since June 15.

For the unique testing strategy - labelled as 'grid testing' by officials - Standard Q Antigen tests kits will be used.

Assam has procured two lakhs rapid antigen test kits after a huge spike in new infections was recorded in Guwahati, northeast India's biggest city which is under a complete lockdown till July 12 to break the chain of transmission.

The pilot project will be launched in Pandu area, a major hotspot of 'community transmission' as per the state government. Over 90 per cent of the patients in the locality have no travel history.

The locality has reported a positivity rate of 38 per cent. Over 33 thousand people live in very congested neighbourhoods in the locality that has several containment zones.

"It is a pilot project. We will start with Pandu area since it's a major hotspot. We will extend this drive to other hotspots and depending on results further expand its scope. This is a part of our aggressive testing strategy to check the spread of the virus. The concept used will be grid testing. Our teams will go to the houses of the already infected positive cases from the area," Assam's Health Secretary Samir Sinha told NDTV.

With the grid testing, the department plans to map each and every house in the hotspots. "Those houses will be under containment. Others in the family- under home quarantine as per protocol - will be tested using the rapid antigen test kits. We will get results in 20 minutes. We will grid the houses and tests randomly one each from the houses in left, right, front and back. If a person from any of those houses turn positive, we will test all members in the family and move on buiding up a house-to-house grid of the area and try to cover the entire area within two days," he explained.

Assam has so far tested 4.71 lakh samples, of which over 12 thousand patients have tested positive. Before the introduction of the rapid antigen tests, tests were being carried out largely on RT-PCR and TrueNat platforms.

Last week, the head of the micro-biology department, her deputy and a team of 10 other technicians of the main Covid testing lab of the Guwahati medical college tested positive after conducting over 50 thousand tests.

The lab was non-operational till Monday, but it will be fully functional from Tuesday as a replacement team from Jorhat has arrived, officials added.