There is glory in seeing monuments, once dedicated to colonisers, enslavers, and brutal leaders, removed from their pedestals and layered with new inscriptions for social justice.

Whether statues are toppled, defaced, or thrown into rivers, those removed in the last week across the United States and Europe reflect the growing acceptance that, if we want to interrupt the status quo in the present, we have to reckon with the traumas of the past.

Apologists for racist terror once said: "Leave the statues alone, they are part of our history." Now, protesters are claiming their rightful place by using monuments as sites of pivotal action. Richmond, Virginia's Monument Avenue, resembles a freshly-breached Berlin Wall, another site of divisive infrastructure turned into a canvas for liberation. Activists in Bristol, England not only tore down the statue of enslaver and human trafficker Edward Colston but pushed him into the wharf and updated Google Maps to reflect its sunken relocation.We are living through a next chapter of history written by those who speak truth to power in public, dismantle antiquated systems, and break apart de facto apartheid.

From Trafalgar Square to Stone Mountain, protests led by Black and brown activists are summoning waves of allies and accomplices to join, act, and put in the work towards anti-racist change.

As we witness the opening days of global protests whose roots run deep, sparked yet again in resistance against entrenched systemic racism and state violence, we are reminded we can no longer postpone radical changes towards the creation of a more just world that we know is possible.

We must explore the connections between our symbols and systems in order to make the urgent and generational change that the anti-racist protest movements require of us. 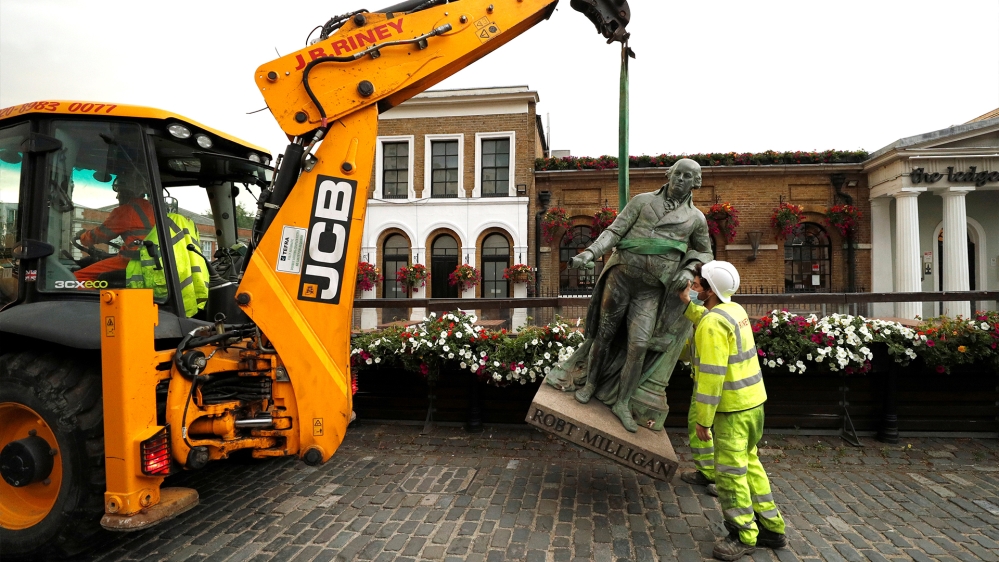 A statue of Robert Milligan, a Scottish slave-trader, is removed by workers from outside the Museum of London Docklands near Canary Wharf, London on June 9, 2020 [John Sibley/Reuters]

The latest monument takedowns are part of a longer struggle over the representation of history. The statues making headlines this week demonstrate how those with power not only build monuments in their own image but do so to justify continued abuses or to shore up support for exploitation. People make monuments to shape the past. For example, most Confederate monuments were elevated during the period of Black enfranchisement to promote the myths of the "Lost Cause", a white-washed retelling of the traitorous role of the confederacy that also romanticised the institution of slavery.

We are witnessing urgent acts of resistance to this sort of revisionist and violent storytelling. Rather than merely repeating the tactics of gilded age trophyism, the new architects of monuments, led by visionary artists and activists, balance presence and absence, consider social justice and harm reduction, and take into account the necessity of repair.

Monuments are statements of power and presence in public. They are often designed to appear permanent but they require resources to keep them in mint condition and mindsets to hold them up. The idea that monuments are timeless, that they contain universal meaning, and that they are stand-alone figures of history - these are the truisms that must also be dismantled.

One can hope that the monument takedowns of the last decade were tremors of what we are seeing now.

Now, as momentum builds through these protests, we are hearing demands to reckon with both the power of pedestals and government budgets that each continue to reinforce white supremacy. We see connections between disproportionately honouring larger-than-life "heroes", whose progress meant pain for communities of colour, and outsized funding for militarised policing. In each case, violent forms of white domination and control are elevated and inscribed as business-as-usual policy.

We have routinely euphemised brutal behaviour in the name of progress and white comfort. A profound reckoning is necessary to consider criteria of who or what deserves monumental status, and how that reinforces economic and civic policy. 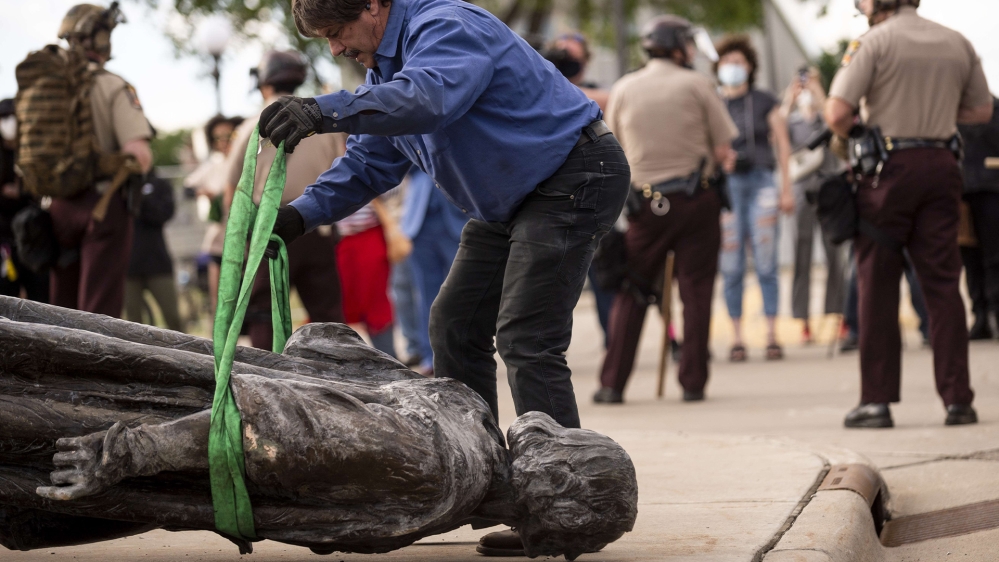 A statue of Christopher Columbus, which was toppled to the ground by protesters, is loaded onto a truck on the grounds of the State Capitol on June 10, 2020, in St Paul, Minnesota. The protest was led by Mike Forcia, a member of the Bad River Band of Lake Superior Chippewa, who called the statue a symbol of genocide [Stephen Maturen/Getty Images/AFP]

In place of these broken monuments, we can ask new questions: What kind of cities do we want to live in? How can care, repair, and reconciliation be our highest priority? What is owed to communities of colour through monumental and economic redress?

For too long, those in power have stood idly by and let the statues around us stand as disconnected from our everyday politics. We knew they were not neutral representations of the past, but often spoke to violence against subjugated peoples, and yet we walked by them with cognitive dissonance of acceptance. We have long tinkered with reforms and symbolic gestures rather than imagining new systems for justice.

If we embrace the challenge of contending with symbols and systems together, we can create new pathways through history.

In my work as a co-founder of Monument Lab, a public art and history studio that seeks to unearth the next generation of monuments through stories of social justice, I have the opportunity to learn from and with artists, activists, and civic designers who pilot new approaches to collective memory.

They think bigger than marble and bronze. For example, artist Tania Bruguera built a monument to "new immigrants", fashioned out of wet clay so that it would disappear over time as acknowledgement of the "strength to start over". Sculptor Karyn Olivier covered an American Revolutionary War monument in a mirror to reflect the working-class Black community that lives in the neighbourhood around the statue.

These new monuments are part of a giant wave of projects pushing us to truly contend with the past and make space for a reimagined public sphere.

The imperative goes beyond taking down the vicious monuments we have inherited - to build radical visions for public art that moves us towards justice, repair, and growth. 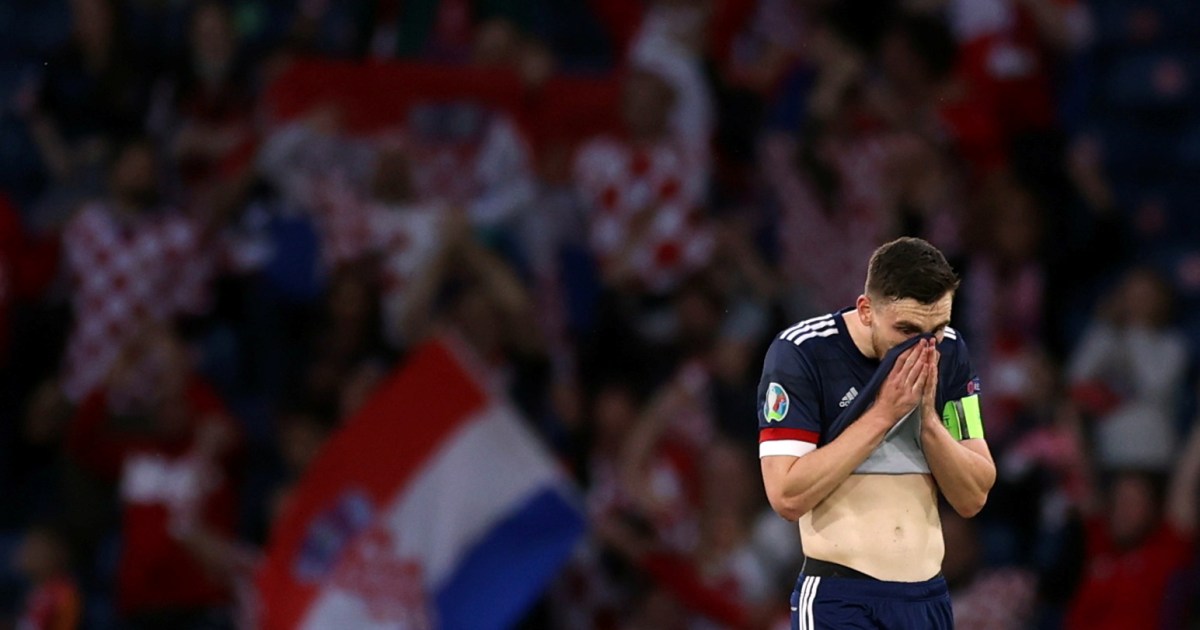 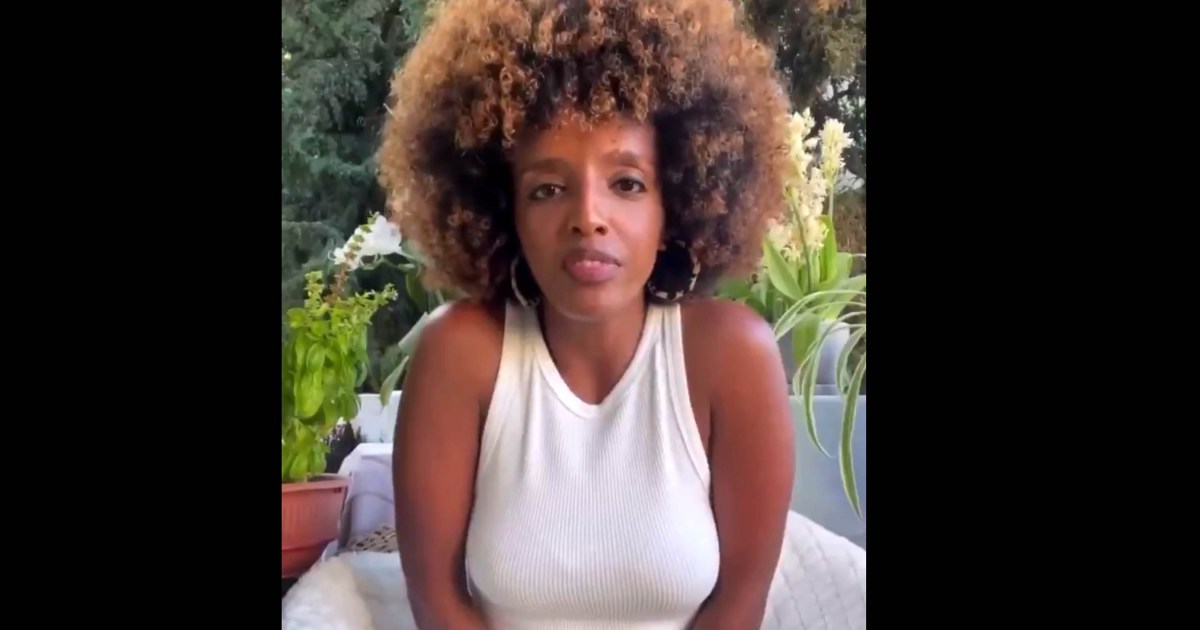