Analysis: Diab was meant to fail. He did it well

Beirut, Lebanon - "They" controlled the state.

"They" blocked the government's reform efforts.

"They" were ultimately to blame for a catastrophic explosion that ripped through Beirut a week ago.

In his resignation speech on Monday evening, Lebanese Prime Minister Hassan Diab said "they" more than two dozen times - but he never said who "they" were, nor explained what exactly they had done.

As Lebanon reels in shock and anger over the August 4 explosion that killed some 200 people, analysts and government insiders say the political establishment that named Diab prime minister-designate in late January had baked in his failure from the beginning; that he was chosen for a role and that he played it well, wittingly or not.

Diab was picked by Hezbollah and its allies - the Free Patriotic Movement and the Amal Movement - amid an unprecedented protest movement railing against a ruling elite whose corruption and negligence led the country into deep economic and social crises.

After his designation as prime minister in January, Diab said he would form a government of "independent experts" who would rescue Lebanon from economic and social doom.

Bassel Sallouk, an associate professor of political science at the Lebanese American University, said it was a ploy of Lebanon's establishment.

"The main aim there was to defuse the momentum of the October 17 protests - and they did that very brilliantly," Salloukh told Al Jazeera.

"We saw the momentum of the protest movement die down after Diab came to power."

Some parts of the political establishment chose to sit out of Diab's cabinet, which won a vote of confidence in parliament in February.

Among them were the Future Movement of Saad Hariri - Diab's predecessor who resigned in the face of the months-long anti-establishment protests - and the Lebanese Forces and Progressive Socialist Party of former militia leaders Samir Geagea and Walid Joumblatt.

But regardless of whether they were in or out, establishment politicians took to criticising Diab's government and blaming it for the ills of 30 years of failed rule following the country's 1975-90 civil war.

"Despite their internal differences, what these political actors will always agree on is to salvage the sectarian political system - this is what allows them to stay in power, to make money," Salloukh said.

House Speaker Nabih Berri, one of the key figures of Lebanon's unbudging political class, had called for a session on Thursday to question the government over the explosion, which also wounded 6,000 people and rendered 300,000 homeless.

"This was unacceptable to us," Shreim said.

"It was theatre aimed at completing this story that we are the ones responsible for everything," she added.

Calling it effectively a "lame-duck cabinet", Maha Yahya, the director of the Carnegie Middle East Center, said Diab's government was not allowed by the country's political elite to take any important decisions.

"I think that it was already on its way out and the explosion basically accelerated the whole process, due to the absence of leadership in the response effort and the lack of state institutions," she added.

Though government ministers point to the past when confronted with Lebanon's deep crisis today, they proved unable to stop the country's economic collapse during six months in power. Diab's office was also informed of the presence of the 2,750 tonnes of ammonium nitrate stored at Beirut's port that fuelled last week's explosion at least two weeks before it happened - but failed to act on time. 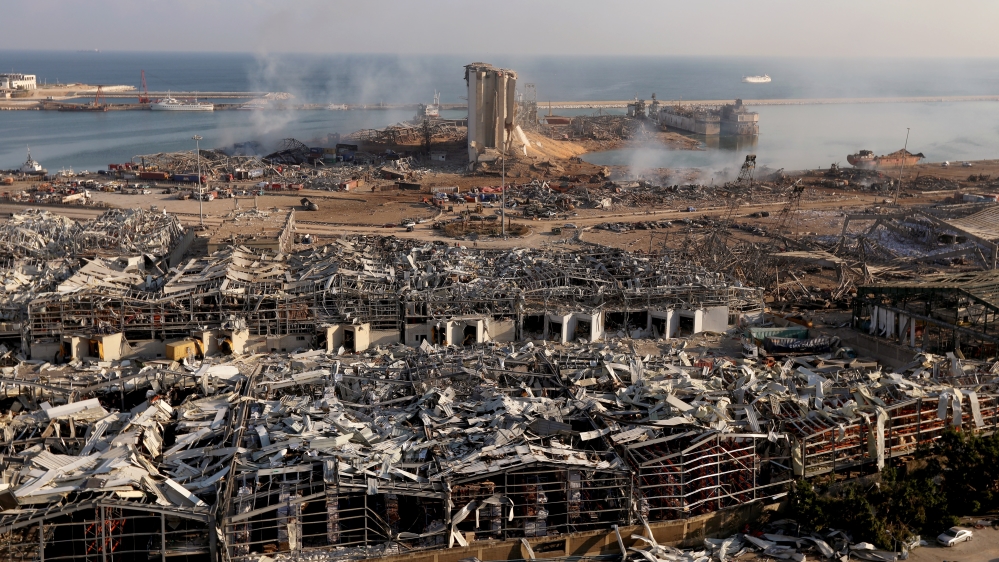 A general view shows the extensive damage at the site of the explosion in Beirut's port area, Lebanon [File: Mohamed Azakir/Reuters]

The government was not helped by the fact that Diab was "basically politically inept, and though he was a good guy he was in way above his head", a government source told Al Jazeera.

Before becoming prime minister, Diab was a little-known academic and a vice president at the American University of Beirut, where he had taught for more than 30 years. He had been education minister for nearly three years (2011-14), after which he published a thick book full of his so-called achievements.

Among the public, he was known for his verbose speeches that blended populism with tortured metaphors.

In one 20-minute speech, which he began with a two-and-a-half-minute metaphor involving a sinking ship, Diab claimed the government had achieved 97 percent of its goals three months in.

"He gave academics a really bad name - 'technocrat' or 'independent' has become a swearword," Salloukh said, referring to Diab's initial assertion that his was a government of independent experts.

The failure of a government headed by self-described independent technocrats worked in favour of a political class who have sustained themselves for decades on a clientelistic relationship with their supporters - a relationship based on the provision of services in exchange for loyalty.

In the end, "it was clear that nothing could be done without obstacles being put in the way by those with hidden interests", the government source said.

Diab had said as much in his final address.