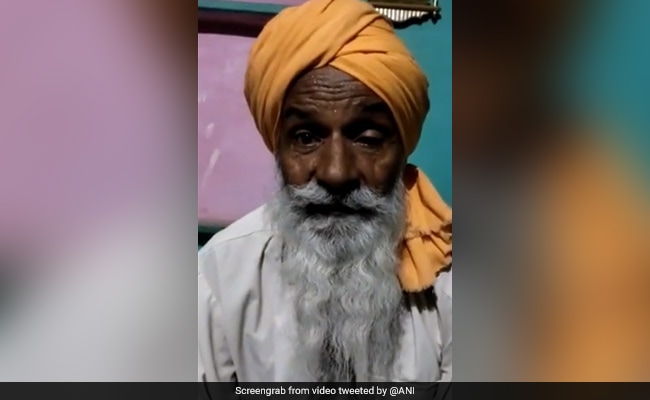 Union Home Minister Amit Shah this morning tweeted a video of a soldier's father in barb at Congress leader Rahul Gandhi, who has been attacking the government over the situation at the India-China border after clashes in Ladakh in which 20 Indian soldiers laid down their lives. In the video, an old man can be heard telling Rahul Gandhi: "Don't indulge in politics."

"A brave armyman's father speaks and he has a very clear message for Mr. Rahul Gandhi. At a time when the entire nation is united, Mr. Rahul Gandhi should also rise above petty politics and stand in solidarity with national interest (sic)," Amit Shah tweeted this morning along with the clip.

In the clip shared by news agency ANI, an old man - wearing a yellow turban and white kurta - can be heard saying: "Indian Army is a strong army. It can defeat China and other nations. Rahul Gandhi, you should not indulge in politics. My son fought... he will fight again. I pray to god he gets better soon."

A brave armyman's father speaks and he has a very clear message for Mr. Rahul Gandhi.

At a time when the entire nation is united, Mr. Rahul Gandhi should also rise above petty politics and stand in solidarity with national interest. https://t.co/BwT4O0JOvl

Rahul Gandhi has been tweeting every day on Ladakh standoff after 20 soldiers were killed in the fight at Galwan valley. This morning, the 50-year-old Congress MP from Kerala's Wayanad tweeted: "PM has surrendered Indian territory to Chinese aggression. If the land was Chinese: 1. Why were our soldiers killed? 2. Where were they killed?"

On Friday, Prime Minister Narendra Modi held an all-party meeting to discuss the situation at the border.  "Neither is anyone inside our territory nor is any of our post captured. India wants peace and friendship, but upholding sovereignty is foremost," PM Modi said at the meeting.

Attacking the government, Rahul Gandhi on Friday wrote: "It's now crystal clear that: 1. The Chinese attack in Galwan was pre-planned. 2. GOI was fast asleep and denied the problem. 3. The price was paid by our martyred Jawans," the Congress leader tweeted, sharing a report quoting junior defence minister Shripad Naik as saying the attack was planned."

On Thursday, he had posed five questions to Defence Minister Rajnath Singh over the government's handling of the "violent face-off" between Indian and Chinese soldiers in Galwan.

Responding to Mr Singh's tweet, which called the death of 20 Indian soldiers "deeply disturbing and painful", Mr Gandhi said the Indian Army had been "insulted" by the Defence Minister not naming China in his tweet.

"If it was so painful, Why insult Indian Army by not naming China in your tweet? Why take 2 days to condole? Why address rallies as soldiers were being martyred? Why hide and get the Army blamed by crony media? Why make paid-media blame Army instead of GOI?," he tweeted.