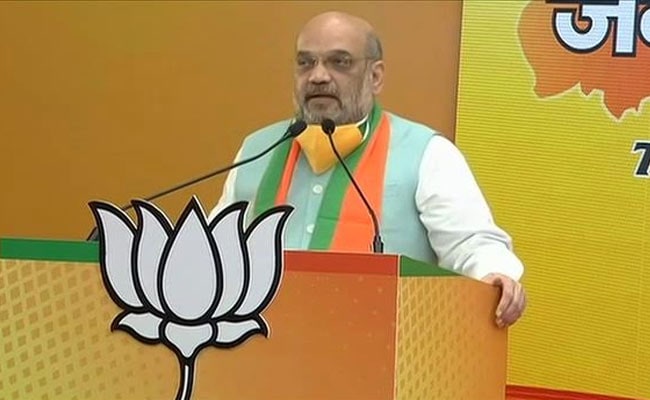 Asserting that the safety of migrants during the COVID-19 crisis was the central government's priority, Home Minister Amit Shah on Monday said it might have made some mistakes but its commitment was absolute and slammed the opposition, asking what did it do for the people during the pandemic.

Speaking of the migrants' plight during a ''virtual rally'' for Odisha, he said all states have done a good job to fight the pandemic and worked with the Centre in a joint effort to take care of migrant workers whose pain had caused anguish to everyone.

"I want to ask some people with distorted mindset from the opposition.... We might have lacked somewhere but our commitment was absolute. We might have made mistakes and fallen short to some extent. We might not have done something but what did you do," he said.

Opposition parties have slammed the Modi government's handling of the pandemic, especially on hardships faced by the migrants due to extended nationwide lockdown.

Taking an apparent dig at Congress leader Rahul Gandhi over his interaction with different personalities on issues pertaining to the pandemic, the senior BJP leader said mockingly that somebody speaks in English to people abroad to fight the coronavirus.

"You give an account to the people of the country of what you have done. I am here to give an account. The Modi government announced a package of Rs 1.7 lakh crore for 60 crore people as soon as COVID-19 broke out," Mr Shah said.

So many disasters occurred in this country and the Congress did nothing but "interviews", he said.

The Home Minister emphasized that over 1.25 crore migrants were transported safely to their homes by the government''s initiative.

The Centre started running Shramik Special trains from May 1 to take migrants home, he said.

Under Modi, the country fought COVID-19 like "one nation, one people, one spirit", Mr Shah said.

He said that the prime minister has done everything possible to fight the pandemic due to which the disease is contained to a great extent in India, and the country is in much better shape than many other nations.

He said the Prime Minister had held at least five rounds of video-conference with all the chief ministers cutting across party lines to take suggestions and all the states have done good work in the battle against COVID-19.

The senior BJP leader said the central government sought suggestions from all states; be it Odisha, West Bengal or Kerala, and rose above any partisan biases in this joint battle against the disease.

Both the Centre and the states have joined hands to fight the pandemic, Shah said adding the Prime Minister's call for the Janata Curfew and the overwhelming response of the people from across the nation was remarkable.

This has kept the entire nation united in the fight against the COVID pandemic. "When the history of the epidemic is written, the one on Janta Curfew will be written in golden letters. I have never seen such spontaneous and overwhelming response to a public curfew," he said.

The senior BJP leader said that the Modi government has been fighting against the COVID-19 taking 130 crore people along with it.

The opposition Congress and others were not seen on the field while BJP workers fed about 11 crore people during the difficult times, he claimed.

"I wholeheartedly congratulate the party president, his team and all the party workers for this," he said.

"COVID-19 is a global pandemic. PM Modi has also advised for social distancing but it can never be so between the people and the BJP. Led by party President JP Nadda, we are now getting in touch with people via virtual rallies," he said.

However, the BJP-led government has so far extended assistance of Rs 72,000 crore to 9.5 crore farmers.

Besides, Rs 6000 is being directly credited to the bank accounts of farmers every year under PM-KISAN scheme, he said.

After PM Modi's pitch to the countrymen to become Aatmanirbhar (self-reliant), the Home Minister appealed to people to take a pledge to use only indigenous products as far as possible and to avoid using imported items.

"I appeal to crores of BJP workers, people of Odisha and the country to take a pledge to use only indigenous products as far as it is possible and to avoid using imported items to make our economy self-reliant," he said.

In his 48-minute address, the Home Minister spoke about the abrogation of Article 370 and 35A in Jammu Kashmir and attacks in Uri and Pulwama.

Under PM Modi's leadership, anyone intruding into the the borders of India will be punished, he said.

"The world was made to realise that encroaching upon India's borders is not a child's play. Punishment is meted out here," Shah said while referring to surgical and air strikes in Pakistan.

His comments came at a time when Indian and Chinese armies are engaged in a standoff in Ladakh with both countries trying to defuse the crisis through diplomatic and military channels.

Shah, however, made no direct comment on the issue.

The minister said that under Jal Jeevan Mission, 25 crore people will get safe drinking water through pipelines by 2022.

No prime minister has done as much for Odisha as Narendra Modi, Shah said in an address in which he refrained from attacking the state's BJD government.

The BJD has often supported the NDA government in Parliament during its key legislative items.

During the recent cyclone, which had hit Odisha, PM Modi "risked" his life and stood with the people of the state like a rock, Mr Shah said.

Protesting farmer leaders allege plot to kill 4 of them