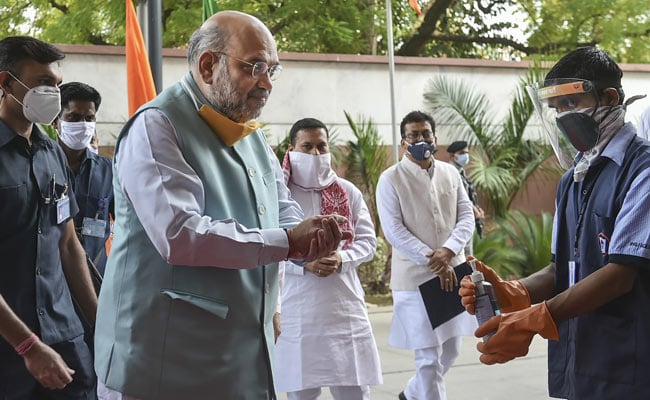 Mr Shah is expected to launch a high-pitched campaign against Ms Banerjee in his virtual rally.

After Bihar, Union Home Minister and BJP leader Amit Shah will on Tuesday will (virtually) kick off the campaign for West Bengal Assembly elections due in April 2021. He will be speaking on multiple social media platforms at 11 am focusing on Bengal. All top BJP Bengal leaders will attend - virtually.

"The rally will kick off a political change in this state," Bengal's BJP chief Dilip Ghosh said on Monday while announcing the mega online event. "It is a first for us and our party will set a world record in the number of people attending."

In Bihar, the BJP leaders have claimed 70,000 LED TV sets were put up across the state for the event and 43 lakh people "attended", as it were. Dilip Ghosh did not say how many LED screens the Bengal unit would be setting up.

"What BJP can afford, we cannot," West Bengal Chief Minister Mamata Banerjee said when asked if she planned a similar virtual rally on July 21, the day Trinamool holds its annual mega rally to observe "Martyrs' Day".

Ms Banerjee was most likely not aware during her 4 pm news briefing on Monday that Mr Shah's second virtual rally was planned to be held in her state the next day. That announcement was made at the BJP office a short while later.

Mr Shah is expected to launch a high-pitched campaign against Ms Banerjee in his virtual rally. The two leaders have repeatedly clashed through the lockdown.

On May 28, Mamata Banerjee revealed she had told Mr Shah that if he thought her government was failing to tackle the COVID-19 crisis, why didn't he try and do it himself.

Ms Banerjee said, "I must thank him but Mr Shah had said at that time, how can we dislodge an elected government?"

Earlier in May, Mr Shah wrote to Mamata Banerjee accusing her of not helping migrants return to Bengal. Some contents were leaked to the media before Ms Banerjee had time to respond.

In a subsequent meeting of Prime Minister Narendra Modi with chief ministers where Mr Shah was present, Ms Banerjee attacked him publicly for "playing politics". She was also angry that his Ministry sent central teams to Bengal first and only later informed her of their arrival.

With Tuesday's virtual rally, poll politics in Bengal between the rival political parties should hit a new peak. The stakes are high. Last May, BJP sprung surprise results in the Lok Sabha polls, sweeping 18 of 42 seats. Trinamool did make a recovery in bypolls a few months later, but BJP has continuously attacked Mamata Banerjee for allegedly mismanaging the COVID-19 crisis and are sure to step up the rhetoric.

The coronavirus crisis which saw alleged irregularities in ration distribution in the districts, police high-handedness to force the lockdown and now hardships for migrants have, according to political observers, hurt the Trinamool at a very critical time ahead of next year's elections.