Kabul, Afghanistan – Intense fighting in Afghanistan’s western province of Herat continued for a third day on Saturday as the Taliban continued an assault to take the province’s eponymous capital, home to hundreds of thousands of people.

Residents fear that the group could enter Herat, the nation’s third-largest city, any day.

On Friday, the road leading to the Khwaja Abdullah Ansari International Airport, 10.5km (6.5 miles) from the city, was the site of intense battles between the Afghan National Security Forces and the Taliban.

Those battles resulted in the death of a local military commander who was captured by the Taliban and the death of an Afghan security guard outside a United Nations compound near the airport.

Though security forces were able to retake the airport road by Saturday afternoon, residents remain on edge.

Sources in Herat said that cars full of women and children could be seen heading towards the provincial capital from the Pol-e Pashto and Pol-e Malan areas.

Both of those locales are less than 10km (6.2 miles) from the city. Security sources say the Taliban hoped to use two bridges in the areas to stage attacks from three sides.

A government official told Al Jazeera that Afghan forces have employed air attacks to defend Herat and that the United States, which is preparing to withdraw all of its forces by the end of August, is paying “close attention” to the situation in the province.

Musa, a member of a local volunteer fighter group known as an “uprising force” in the province, told Al Jazeera that fighting had not subsided on Saturday and that people remain fearful, even in the city.

“The Taliban continue to stage assassinations and launch grenades,” he said, which makes people afraid to move around a city that is considered one of Afghanistan’s economic and cultural hubs. Other residents said several markets in the city remain closed, as many people are too scared to venture outside.

“The situation is very difficult right now because of terror from the ‘inside’,” Musa said in reference to claims that supporters of the Taliban are providing the group information from within the city.

The latest battles in Herat come as the Taliban also tries to inch closer to the cities of Kandahar and Lashkar Gah in the south.

The Taliban launched a sweeping offensive across Afghanistan in early May as the US-led foreign forces began their final withdrawal.

For many Afghan people, the Taliban’s efforts to take control of some of the nation’s largest cities belies their claim that they are in favour of a political settlement to the 20-year conflict.

For Herat residents, the warning signs of an intensifying battle were apparent in recent weeks as the Taliban continued to seize districts near the city.

Shoaib Khan, a local businessman, told Al Jazeera he and his family left the city for Kabul prior to the Eid al-Adha holiday earlier in July.

“We could see even then that the situation was getting worse and worse,” he said.

Khan’s family businesses back in Herat have been left largely unattended for nearly two weeks now.

“When we wanted to go and check on our business we couldn’t because the airport was closed,” Khan said. Travelling by road to Herat would require a journey of more than 14 hours along a road that would leave them susceptible to being stopped at any number of Taliban checkpoints. 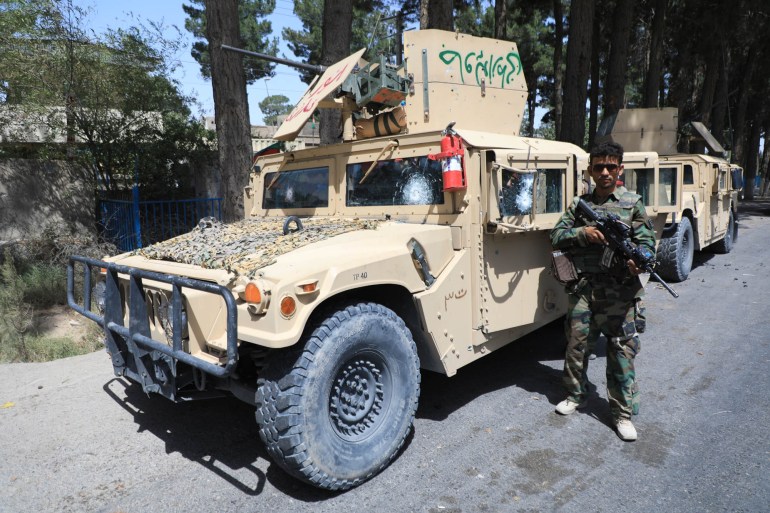 Afghan National Security Forces, along with local uprising forces, were dispatched to the areas near Herat’s airport in an effort to keep the Taliban from reaching the provincial capital [Mohammad Aref Karimi/Al Jazeera]

Musa, the fighter, says the uprising forces and the army and police are putting up a brave fight, but that the sheer number of Taliban fighters is “unbelievable”.

The Ministry of Defence claims that dozens of Taliban have been killed in Herat in the last two days.

“They’re like ants. As soon as you kill them, more appear.”

The government official told Al Jazeera that the Taliban could have as many as 1,000 fighters in Herat at the moment. Pictures shared by uprising forces online purport to show numerous dead bodies belonging to the Taliban; however, those images could not be verified.

Uprising forces and residents in Herat told Al Jazeera that the Taliban have been accused of commandeering civilian homes in the outskirts of the city to stage their attacks. Residents in Kandahar also made similar claims to Al Jazeera last week about the fighting near their city.

“The Taliban entering the house of people makes it much more difficult for us, we have to be so much more careful,” a member of the security forces told Al Jazeera.

The uprising forces, led by former anti-Soviet commander Ismail Khan, have been fighting alongside the security forces for several weeks now, but they say they have not been given the support they were promised by the government in Kabul.

Khan has said he spoke to Afghan President Ashraf Ghani on Friday. Ghani, according to Khan, promised to send reinforcements, but on Saturday Khan said that assistance had yet to arrive.

The Ministry of Defence did not respond to Al Jazeera’s request for clarification on Khan’s claim.

But Musa says Khan is correct in his criticism.

“It’s been three days and three nights of fighting, but still the uprising forces haven’t received the weapons and ammunition they need,” Musa said.

Khan’s presence on the battlefield has led to a heated war of words online.

Many have exalted the former governor, who has been accused of abuse and corruption in the past, for his willingness to defend the city even in his seventies.

Other online accounts, seemingly belonging to Taliban supporters, claimed Khan was attempting to flee to Kabul as the fighting intensified.