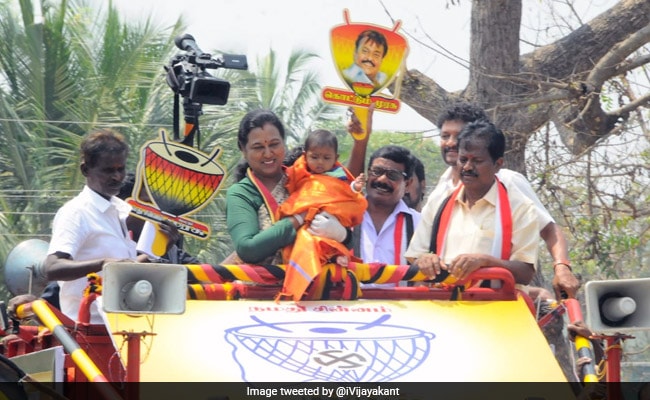 DMDK chief Vijayakanth's wife Premalatha Vijayakanth, who is contesting the Tamil Nadu assembly election from the Virudhachalam seat, is worrying healthcare authorities as she refused to undergo a Covid test before campaigning in the constituency despite being closely exposed to two people who tested positive. Her her brother and later, his wife, tested positive for the virus.

A team that approached Premalatha Vijayakanth and asked her to undergo the test reportedly was told that she will finish campaigning today and then go for the test. Covid protocols demand that a person remains in isolation if she or he has been exposed to a an infected person.

Ms Vijayakanth reportedly moved around among the public with over 100 supporters. She had recently stayed with her brother Satish and his wife, both of whom tested positive for Covid. They were staying together at a wedding hall. While the brother is in hospital, his wife is under quarantine at home.

Actor-turned-politician Vijayakanth, the chief of Desiya Murpokku Dravida Kazhagam (DMDK) and the party's chief ministerial candidate, himself was seriously ill after getting infected with the virus last year. He subsequently recovered.

He is, however, neither contesting nor campaigning for the state election as both could severely impact his health.
Virudhachalam is a constituency in Cuddalore district from where Vijayakanth had first contested and won the election soon after he launched his party in 2006.

Earlier this month, he exited the AIADMK-led alliance over a seat-sharing dispute and finalised an election partnership with TTV Dhinakaran's Amma Makkal Munnetra Kazhagam (AMMK).
The Tamil Nadu election for the state's 234 assembly seats will be held on April 6 and the results will be out on May 2.