Beirut, Lebanon – Maysar Al Suleiman and his family fled from the carnage of war in Syria to Lebanon in 2014, only to narrowly avoid death in the Beirut Port blast that devastated parts of the city one year ago.

Al Suleiman, his wife Hasna, and six children lived in the semi-industrial Karantina neighbourhood, just a stone’s throw from the port where the explosion on August 4, 2020, killed more than 200 people and wounded 6,500 others. Many in Lebanon blame officials for storing hundreds of tonnes of highly explosive ammonium nitrate at the port, which ignited and caused the blast.

The sheer force of the explosion blew out the doors and glass from the windows in Al Suleiman’s home and part of the ceiling collapsed.

“If I wasn’t out with the children, and my pregnant wife at the doctor’s, then God knows what would have happened,” Al Suleiman told Al Jazeera.

Al Suleiman and his kids were playing football in an empty lot in the neighbouring Achrafieh area when the explosion happened. Glass pierced his body, leaving him with chronic pain in his leg and his left shoulder, which he still struggles to move.

He once worked at the Beirut Port and is struggling to find employment that will not aggravate his injuries. He relies on borrowed money from friends and family and aid from humanitarian organisations but struggles to make rent; the Al Suleiman’s have moved homes three times since the blast and now reside in a largely unfurnished apartment in Achrafieh.

Their latest landlord has at least been lenient with their inability to pay rent on time.

“Bless him he’s an honourable man,” he said. “But we’re living off very little. We have two beds from former tenants that can fit the kids, but I sleep on the floor.”

The family does not expect to be able to move back to their old home in Karantina anytime soon. Their landlord there told them he is not in a hurry to spend money to repair the property amid Lebanon’s dire economic crisis – with the Lebanese pound losing 90 percent of its value since late 2019, coupled with soaring price hikes.

And the Al Suleiman family are far from alone in not being able to go home after the blast.

About 300,000 people were initially left homeless after the Beirut Port explosion. Some were able to afford to repair the damage or move to new a flat elsewhere, while many moved in with relatives.

But in some cases, people have been living in empty damaged buildings.

The Lebanese government has relied heavily on NGOs, civil society, and the private sector to map out and respond to the blast damage. About 50 percent of an estimated 77,000 damaged buildings (PDF) have been repaired, according to Contractors Syndicate head Maroun el-Helou. NGOs say thousands of people remain homeless, and the worsening economic crisis has made finding new accommodation more difficult.

“The blast left many families broken, physically, financially and mentally,” President of humanitarian organisation Project HOPE Rabih Torbay told Al Jazeera. “The country now has an average minimum wage of 675,000 Lebanese pounds, which is about $30 per month.”

Lebanon has been without a full-fledged government for almost a year, and blast victims and aid groups say the cash-strapped state has largely been absent from the relief effort in the aftermath of the explosion. Lebanon’s prominent parties have failed to break the political deadlock to form a new government and implement reforms needed in order to unlock billions of dollars of foreign aid.

Instead, humanitarian agencies have tried to help people affected by the blast, providing cash to help them pay rent and cover skyrocketing food prices.

“The Beirut Port explosion revealed the vulnerability of the city and the weakness of its buildings,” UN Habitat Senior Planning and Infrastructure Engineer Elie Mansour told Al Jazeera, adding that humanitarian agencies have been scrambling to improve housing, access to healthcare, and other living standards.

“And so far the assistance in all humanitarian sectors has been minimal, let’s be frank.”

With corruption and financial mismanagement endemic, the international community has hesitated to shell out large sums of money to the Lebanese authorities, and primarily transfers funds to UN agencies and international organisations.

Last December, the World Bank, European Union, and UN launched an 18-month response plan to the Beirut blast called the Reform, Recovery, and Reconstruction Framework (3RF). Lebanese authorities are required to pass and implement a handful of reforms, including laws that strengthen the independence of its judiciary, reform its ineffective electricity sector, and expand its social security services.

But implementing the framework has been painfully slow, with Lebanese leaders scrambling to end a political deadlock and secure funding to cope with a crippling fuel and electricity crisis.

Meanwhile, much of the rubble from the blast has yet to be cleared. The UN and other international agencies have been using an empty lot in Karantina to treat and separate contaminated rubble and glass using machines donated by the Finnish government. 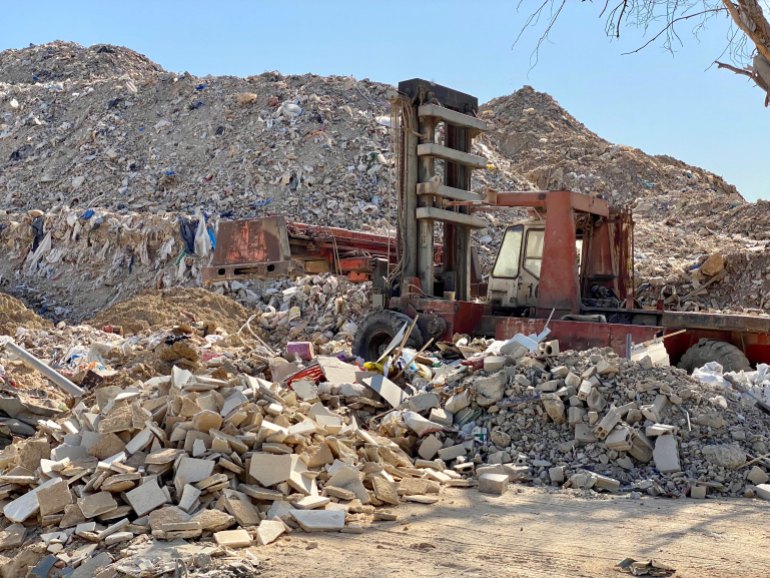 More than120,000 tonnes of rubble from the blast overlooks the port [Kareem Chehayeb/Al Jazeera]

“We found out after a test that there was a lot of asbestos, so our workers cannot sort without wearing protective gear,” Mansour said. “And even to this day, around 25 or so pick-up trucks come in filled with rubble per day.”

More mounds of debris remain at the port, but the UN engineer says the Lebanese Army has been tasked with taking care of it.

“That rubble is contaminated with all sorts of … ammonium nitrate and other hazardous substances stored there,” Mansour said.

Architect and urban designer Abdul-Halim Jabr says Lebanon’s economic crisis has put tenants of damaged properties in an even more difficult position and more vulnerable to becoming victims of gentrification.

“There are tenants who can’t afford to live any more with the devaluation of the currency – especially with most of the contracts being in US dollars,” Jabr told Al Jazeera.

“And even if their building was restored, there are owners that would want to find tenants with more purchasing power.”

Not only did residents face evictions soon after the blast, but real estate brokers have also swarmed into the neighbourhoods, trying to buy damaged homes to demolish them in order to build swanky towers.

Many residents rely on a single law that keeps them from being homeless. In October 2020, the Lebanese parliament passed Law 194 that stops evictions and real estate sales for all properties in the three neighbourhoods ravaged by the blast for two years.

Architects and urban activists like Abir Saksouk of research group Public Works say the law is far from perfect but it is the only protection for many vulnerable residents in blast-afflicted neighbourhoods, many of which have already been gentrified and redeveloped rapidly over the past decade.

“There could be a social catastrophe,” Saksouk told Al Jazeera. “These are communities with rich histories, from port workers from across Lebanon to the Armenians, to migrant workers and Syrian refugees.” Saksouk and her colleagues still document evictions and threats from landlords to this day.

Beirut Governor Marwan Abboud has said he is committed to protecting residents from eviction. Abboud and his office did not respond to repeated inquiries from Al Jazeera.

For now, the law – and arguably Lebanon’s poor economic outlook – has deterred much real estate investment.

But one year on from the blast, Beirut’s urban recovery is still stalling, and that is cause for concern.

“The situation is in limbo now, we know there is some speculation taking place,” Jabr said.

“Our primary concern now is how residents are coping, and to what extent we can re-stitch together these communities’ social fabric.”