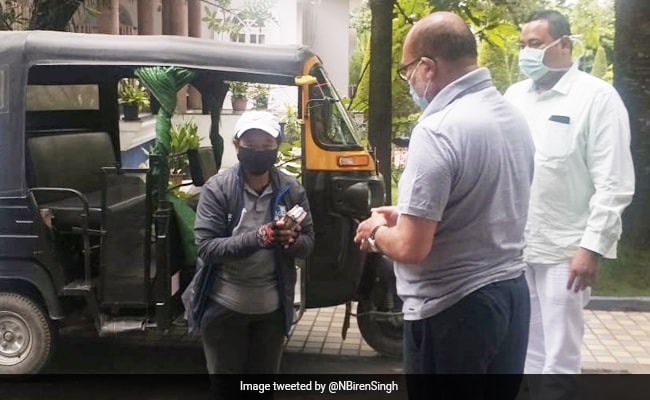 The road that led to the remote village on the Myanmar border was trecherous.

One day last May, between selling smoked fish and taking care of her acutely diabetic husband, 52-year-old autorickshaw driver Laibi Oinam of East Imphal made an eight-hour, 140-kilometre road-trip for a Covid warrior. That journey made history - and a hero out of her.

Today Ms Oinam is counting her blessings as that one act of courage on her part let her tide over a difficult period, thanks to the Manipur Chief Minster's Health Card she received as reward. It helped her make ends meet during the two months of her husband Rajendro Oinam's hospitalisation following a severe foot injury that almost led to amputation.

Having just returned home, Ms Oinam, Manipur's first female autorickshaw driver told NDTV about her adventure and the call of duty that she attended to.

On May 31, the mother of two saw two men pleading hard with taxi drivers in Imphal's Dewlahland market. A young nurse, Somichon Chithung, who had just recovered from COVID-19, had to be transported from the hospital to her home in a remote village 140 kilometres away along the Myanmar border. Nobody was keen on making the trip.

"I volunteered for the journey. The two elderly men were relieved at this. 'How much would the fare be?' they asked. I said Rs 5,000. They offered Rs 5,500," said Ms Oinam, who took along her husband on the journey.

The trip, made in her trusted autorickshaw took eight arduous hours, and was anything but easy. The road was treacherous and visibility poor thanks to the fog. It was very cold, too, she recalls.

Ultimately, she did take Ms Chithung safely home. A decade of driving the autorickshaw, somehow, seemed to have finally borne fruit.

Ms Oinam has two ways of earning a living otherwise: selling vegetables and smoked fish in the morning and driving the vehicle. "I took up the autorickshaw after my husband became unwell. I had to start earning to feed the family and school the children," she said.

Her courage and dedication soon drew attention - and admiration.

"Laibi is our locality aunty. She works very hard. She is the symbol of women power. She is my hero," said Chandini Oinam, a neighbour.

Soon her story reached Chief Minister Singh who rewarded her with Rs 1.1 lakh, ensured her family got its own ration card, and also a Chief Minsiter's Health Card.

"The health card that the CM gave was very helpful in paying for my treatment in the hospital," her husband Rajendro Oinam said.