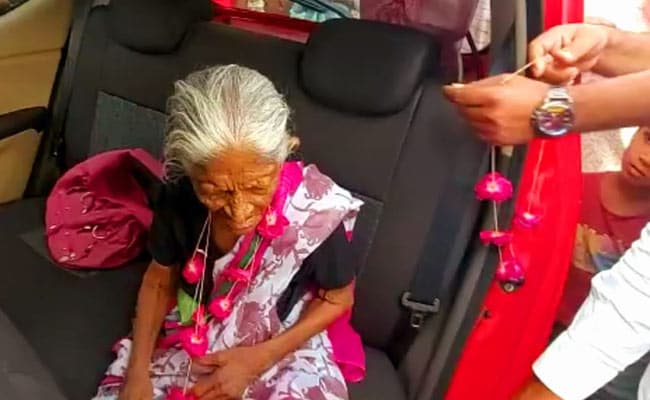 Panchubai's grandson came to take her back home on June 18.

Around 40 years ago, Panchubhai was 53 when she landed in a small village in Madhya Pradesh accidentally after a local saved her from a bee attack. Separated from her family, she lived with the villagers over the past four decades and developed a bond with the locals, who did not understand her native language - Marathi. Last week, when she reunited with her family from Maharashtra, a large group of men and women gathered to give her a tearful send-off.

A video shows women from the Damoh district's Kota tala village weeping as they say a tearful goodbye to the 93-year-old woman, better known as "Mausi (aunt)" to them. Panchubai is seen sitting in a red car.

The locals were overwhelmed and many of them wept inconsolably when Prithvi Kumar Shingle, her grandson, came from Nagpur to take her back home on Thursday amid coronavirus lockdown.

93 years old Panchu Bai in MP, reunited with her family in Vidarbha after " #lockdown googling, she was living with a Muslim family in Damoh.They wept inconsolably when her grandson drove her home @ndtv@ndtvindia@sohitmishra99@RajputAditi@sanket#HappyFathersDay2020pic.twitter.com/tQb0p1xDge

Last month, she was sitting with the elder son of Noor Khan, the man who had saved Panchubai 40 years ago, when she murmured something in Marathi. She had become a member of the family after Noor Khan brought her home in the 1980s.

He died in 2007 but the entire family was deeply attached to Panchubai, who was treated no less than a "grandmother", according to them.

Israr, Noor Khan's son, on May 3 was browsing on his mobile phone when he asked Panchubai about past, name of her village, as he tried to help her find her roots.

"Khanjnama", "Pathrot", she whispered and Israr typed both the words on Google. Pathrot turned out to be her native village. He contacted a villager.

Israr sent her pictures to them using WhatsApp and her family was located within a few hours.

"The villagers are crying, we are crying but they (Panchu bai's family) are refusing to send her back but now that his family traced her, they also want to be with her. It's good for her that she finally can meet with her grandchildren," said Israr.

Prithvi Kumar Shingle who drove his 93-year-old grandmother to Nagpur was surprised to see the affection of the villagers. He was not even born when her grandmother who was taken for treatment in Nagpur disappeared. 40 years later, it's still not clear how she reached Damoh.

"I am going with her, I am happy that we got this opportunity and really happy how the villagers took care of her," he said.

Bidding goodbye to Panchubhai for villagers was not easy. Dressed in a new sari last Thursday, as she sat in the car, one woman was seen hugging her. Another local put a garland and burst into tears as"Mausi", who had been part of their lives for four decades, set off for a new journey.