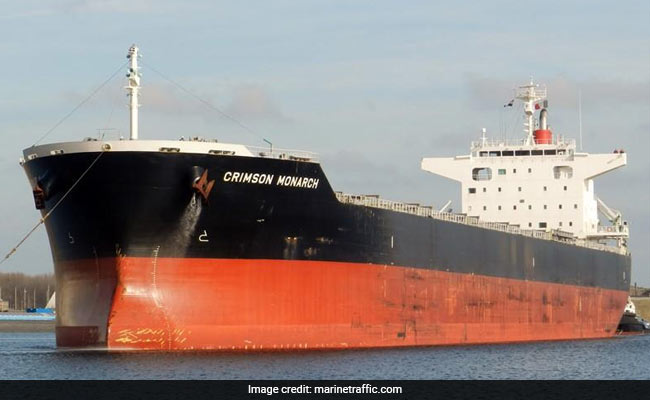 87 Indian crew members from six ships have left for Mumbai aboard a chartered plane after spending months at sea due to the coronavirus restrictions, local media reported on Saturday.

The chartered plane flew in 54 crew members from Mumbai to Singapore to replace the departing personnel belonging to the six ships for their onward journey from the Port of Singapore, according to The Straits Times

Chief Engineer Awadhesh Prasad, 54, who was to go home in Ranchi after his four-month contract with shipping company Executive Ship Management ended, was among the crew repatriated to India.

Mr Prasad's plans of returning to Ranchi in February were cancelled due to the COVID-19 pandemic, which led to borders being sealed.

Mr Prasad and the crew of the Crimson Monarch could not disembark and ended up continuing on the bulk carrier's journey to Canada, Brazil and Australia, among other countries, for about four more months, before his employer found a way to send him home.

The Crimson Monarch could not dock at any port since May 9 when it left Brazil.

The Maritime and Port Authority of Singapore (MPA) on Friday said that it has approved more than 4,000 cases of crew sign-ons and sign-offs for more than 300 companies and 500 ships since March 27.

Singapore Transport Minister Khaw Boon Wan raised the issue of seafarers being stranded due to coronavirus restrictions worldwide on his Facebook page on Tuesday in response to a Financial Times article.

"Many crew (members) have worked several months beyond their contracts, due to recent travel restrictions which bar crew from disembarking to return home," said the minister.

"This has led to the international shipping industry threatening to cease sailing unless replacement crew can be brought in," he said.

Mr Khaw said this issue could potentially disrupt or clog up the global supply chain as commercial vessels shoulder about 80 per cent of world trade.

Getting a flight to India, which had earlier banned air travel, was not easy, said Executive Ship Management managing director SP Singh.

"International flights are banned in India... In order to charter a plane, we had to go through a long process to get the relevant permissions. The Singapore authorities had been very cooperative," The Straits Times quoted Mr Singh as saying.

The back-up plan was to wait for governments to reinstate international flights, which Mr Singh felt was not a viable option.

"The seafarers were having a tough time not seeing their families," said Mr Singh, adding that the crew's family members in India had been asking the company when their loved ones would come home.

Mr Prasad said that he called his wife and daughter every couple of days to check in.

"They are very understanding of the situation because it's all reported in the news. They kept asking me to take care," he said.

The vessel was never at risk of running out of food, and the crew could use high-speed Internet to call home, but it was the uncertainty of securing a way home before the pandemic ceased that frustrated Prasad.

"It's very difficult, not knowing when I can go home... I worry for my family," he said.

The novel coronavirus, which first emerged in China's Wuhan, has claimed over 4,20,000 lives with 7.6 million confirmed cases across the world so far. In Singapore, COVID-19 toll stands at 25 with more than 40,000 positive cases.

Are govt machinery inept and incapable to file plea in time, asks SC