58 Indian Fishermen Repatriated From Iran After 4 Months Of No Work, Pay 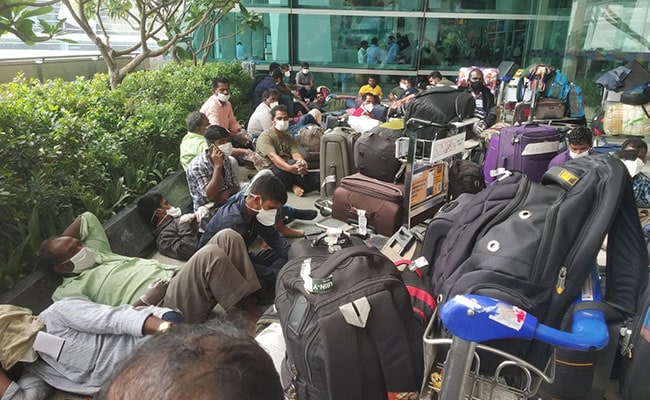 58 Indian fishermen, who were stranded in Iran for over four months without work and wages amid the coronavirus pandemic, arrived in Delhi today. Their return was made possible by Sanjay Prashar, Chairman of the International Maritime Federation, who paid for all their tickets within days of getting an SOS call.

"The mental and physical exhaustion on their faces is evident. They now have to get on a connecting flight," the team that helped these fishermen - 18 are from Kerala and 40 from Tamil Nadu - get home said.

The fishermen were brought to the Tehran airport in a bus on June 14. They landed in Delhi around 3AM through Mahan Airways, which has been operating flights under the government's Vande Bharat Mission to repatriate Indians stranded abroad.

Earlier this year, the 18 fishermen from Kerala's coastal village of Vizhinjam had left for Iran for the first time to work on fishing vessels for private employers.

"I had paid Rs 50,000 to my agent to get to Iran. Each of us from Kerala had paid that amount. I had even mortgaged my wife's wedding necklace (tali) for this. I am returning with nothing. Since I had to borrow from friends to be able to eat even one meal a day while I was stranded in Iran, I have accumulated a loan than I have to pay off," 36-year-old Aruldas, who managed work for only 10-12 days, told NDTV.

The rest of the months were mostly without any work due to the COVID-19 situation globally, he said.

Melbai V, 50, could only manage to work for four days before being left jobless for at least four months. "We were not even paid for the work that we did had manage to do. We were told that our employer could not sell fish in Dubai because of the lockdown," he said.

Mr Melbai's two sons, who are in Thiruvananthapuram, are in the same boat as their father's. They, too, have not been able to catch and sell anything for months because of the temporary ban on fishing activities in the district to avoid large gatherings.

"The 40 fishermen from Tamil Nadu were living in two rooms; 20 each in each room. They would eat one or two meals in a day. It has been very hard for them and they had little hope of ever returning until the repatriation flight worked out," L Praveen Kumar, the General Secretary of Maritime People's Welfare Association told NDTV.

It was Mr Kumar who first made a SOS call to Mr Prashar about the possibility of repatriating these stranded fishermen. "Within five working days, the arrangements were made and tickets sponsored by him," he said.

"The fishermen who arrived today were not a part of the 550 fishermen who were repatriated from Iran in Indian Navy ships in the last week of June. The ones who returned today were the people who were left behind because of possibly capacity issues. They have been having a harrowing time. When I was a captain on big ships and would see our fishermen brothers on the sea, I would always be struck by their guts. I am happy that I could help them. After all, we all are Indians," Mr Prashar told NDTV.